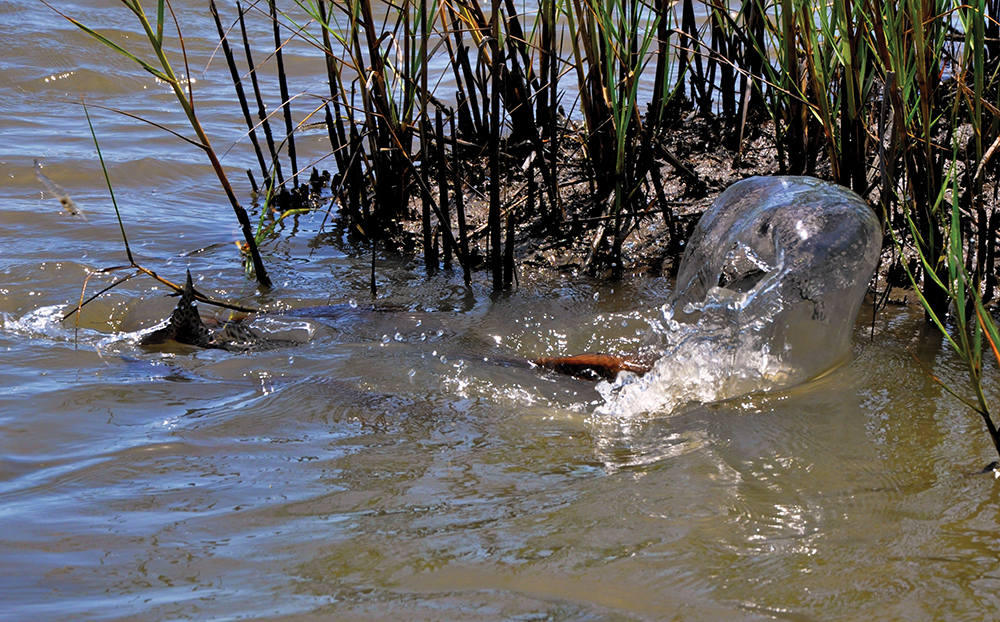 November redfish and solid trout cruising the cordgrass for a shrimp dinner.

I don’t know about y’all, but I’m ready for November. It has been a lot of fun running the Dargel Kat out on the beachfront chasing tarpon, kings, jacks and all the other summer residents. Now I’m ready to get back to poling the flats and back lakes for schools of hungry redfish.

As I write this in early October the tarpon are starting to head south and the weather guessers are starting to talk about a cool front moving in. I’ll believe that when I walk outside and feel it.  These early fronts tend to fizzle out, but hopefully a good one will push through and get the thermometer to drop into some more comfortable numbers by the time you read this.

As of now, the shrimp are nearly mature and still hanging out in the cord grass on the higher fall tides. Fast moving small schools of redfish have been bumping their way down the shorelines dislodging shrimp and feeding as they go. This is an exciting style of sightcasting. The visual of rampaging reds beating the grass can make even the best caster sail a fly into the grass and blow it.

When targeting these schools I’ve found it best to get a good distance ahead of them and let them come to you. Trying to catch up to these schools from behind is often a losing proposition.  They either outrun you or you make too much noise while trying to close the distance. It also gives you a chance to take a deep breath and maybe make a couple practice casts to gauge your distance and boost your confidence. As the school gets into range, drop the fly just ahead of them and as close to the grass as you dare without snagging. One or two quick strips perfectly imitates a shrimp fleeing the grass and will nearly always get eaten. If you aren’t into fly fishing, a weedless paddletail or a DOA shrimp works just fine.

Of note, always keep an eye on the back end of these schools. I’ve seen some mighty fine trophy trout following them and picking up the leftovers. A while back I had one of my regulars on the bow chasing the cord grass schools. He’s an excellent caster and generally a cool hand on the rod. As he started the false cast I noticed a solid eight-plus pound trout ghosting along the edge a few feet behind the school. Upon relaying this information my guy lost all recollection of how to work a fly rod. In hindsight, I should’ve just directed him to cast back there without the excited, “Huge trout right behind the school” commentary. Anyway, just be aware that the trout of a lifetime could be slumming with those redfish.

The north winds of cold fronts will drop the water levels pulling those shrimp out of the grass.  Early in the season they’ll often just bump off the grass and bury into the mud along the shorelines. The schools will generally slow down a bit and start mudding their way along the shoreline. It isn’t nearly as fast and furious as the grass-bumping schools, but it’s still productive to approach them in the same manner. During these times there will also be singles prowling around, tailing occasionally. Those fish make for some really easy targets.

Between these mild early-season fronts, the water levels will rise and the shrimp will return to the cord grass. Eventually, usually mid- to late-November, there will be some stronger fronts.  When these fronts push through they’ll often drop the water levels significantly enough to trigger a drain feeding frenzy. Do yourself a favor…be there. My best days in the marsh have come on these drain days. Everything in the marsh has to leave with the water funneling into the ditches and small bayous. The reds aren’t hard to locate as they crash through the bait and you’ll often hear the activity before seeing them.

Following these fronts we’ll often see a few days of mild weather or maybe even a return to southeast winds that will allow the water to return to the back lakes. The bait comes back and so will the reds. It is during these times between fronts that I’ll often find some of the largest schools of the year in the marsh. The shrimp are gathering in larger schools within the lakes as they mature and prepare to vacate the marshes. These roving schools are often betrayed by low flying gulls or terns.

Eventually we’ll get the big bad cold front. It seems to hit right around Thanksgiving most years, but sometimes we’ll skate through until early December. This front will set up a great drain day the same as the earlier fronts, but while the water is gone the lower temperature chills the exposed mud and changes the game. The shrimp aren’t coming back this time and that signals a change in feeding patterns. Some of the reds will follow them out onto the adjacent flats while others will stick with the marsh while turning their attention to a diet of baitfish and crabs. They will generally be in smaller packs or cruising as singles.

On the plus side, the cooler water temps will clear the water up a good bit making it easier to spot those cruisers. Immediately following those real fronts when the sun comes out and it starts to warm up I tend to focus on the flats or lakes near some deeper areas. It’s still pretty easy to find some concentrations of fish but given a prolonged warming spell they’ll spread out more and the hunting can become a bit tough.

My other favorite thing about this time of year? When the weather just flat sucks for being on the water I can always walk out to the back pasture to sit in the deer stand for a while. Yep, I’m ready for November.