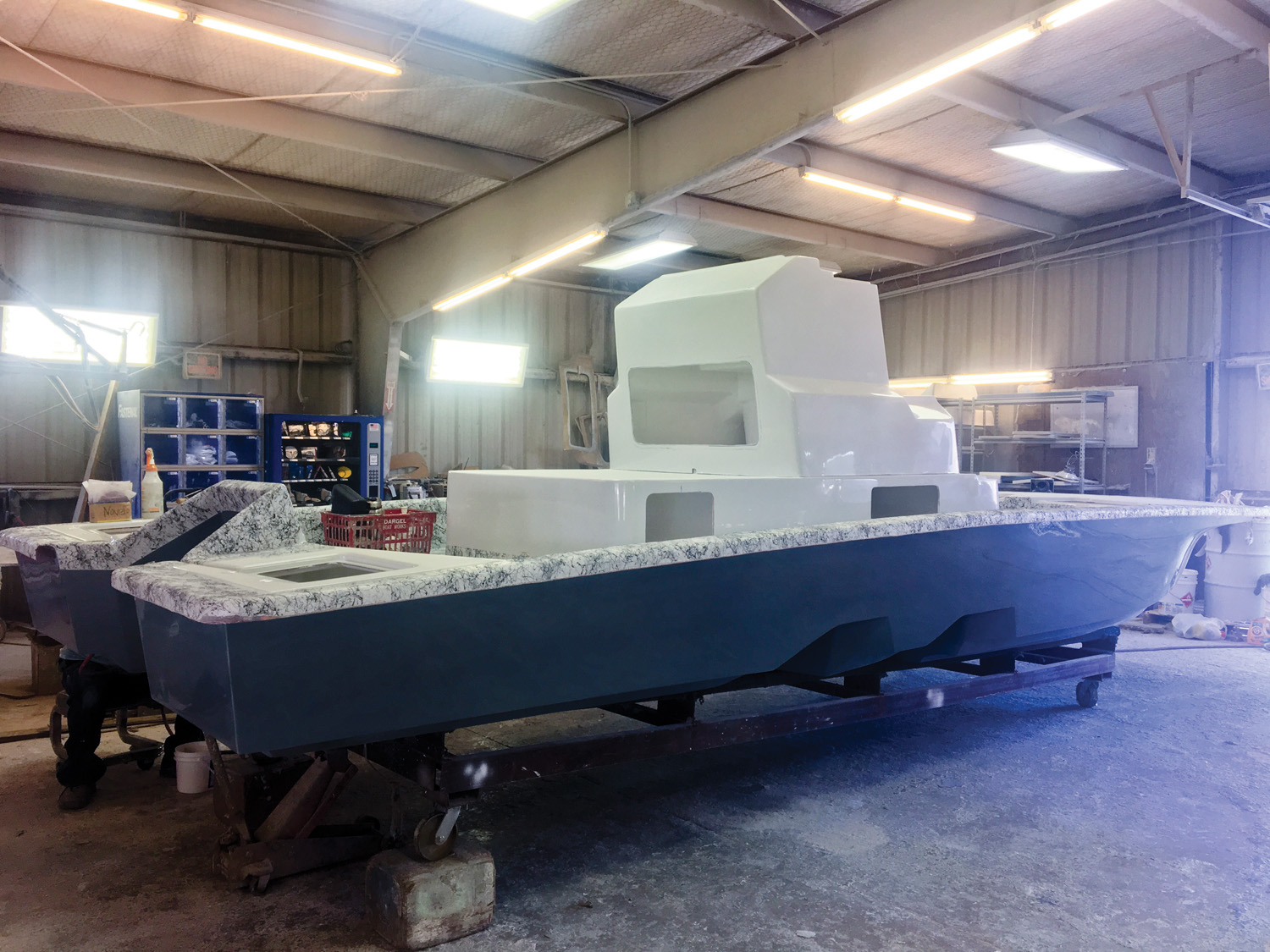 My new baby about to be rolled over to the rigging shop.

I’ve always been enamored of fishing the beachfront and nearshore. When I was a kid we would head out there at least a few times every summer. There was something really cool about clearing those jetties and pointing the boat towards the sunrise, wondering what we might experience. Dad didn’t really have an “offshore” boat so we had to pick our days and watch the weather. I can remember getting super excited listening to the NOAA radio and hearing the seas would be one- to two-feet. That was our green light.

Over the years I’ve owned many boats. Some were capable of doing ice cream conditions trips, others not so much. Throughout my 20s I ran a 17’ McKee Craft that spent a good many days further offshore than it probably should have gone, but man did we have fun. There’s no telling how many kings, ling, dolphin and snapper were hauled over the gunnels of that old boat.

There was a memorable strike on a trolled Russelure that I still wonder about. Whatever it was hit like nothing I’ve ever seen, and never even thought of slowing down. My poor ol’ Penn 4/0 didn’t stand a chance, but she gave it hell right down to the last wrap on the spool. I suppose that has always been my attraction to running around out there. You just never know what you’ll see or hook into on any given day.

Over the last fifteen or so years I’ve been running small poling skiffs mostly, chasing redfish with fly rods. Poling skiffs aren’t exactly the best craft for running offshore so my time out there has been limited. My current skiff, the East Cape Fury, has seen a good many days cruising the beachfront, and on out a couple of miles. There are plenty dead-flat late-summer mornings that make the running smooth and easy. The hitch in that plan comes with afternoon wind. I’ve pushed it a bit. OK, maybe more than a bit, and made some sketchy runs returning through the jetties or Pass Cavallo.

Since moving my guiding operation down to Port O’Connor this past year, I’ve been itching to get a boat more capable of handling the afternoon chop. “Offshore” along this part of the coast is a whole lot closer than out of Galveston, and the temptation to sneak out is constant.

My bank account won’t allow for a dedicated offshore boat, so I’ve spent the last year hunting for something that can do dual duty running bay trips, yet fit the budget. Also during that time, I began polling my customers and found enough interest in fly fishing the beachfront to justify a move in that direction.

A couple months back I was hanging out with Capt Dean Thomas at Rock the Dock In-The-Water Boat Show at Aransas Pass. The wind was absolutely ripping as it often does in April, pushing 30-35 mph steadily. Dean runs a Dargel Skout and was helping out with test drives.We got to talking about what I was looking to do and decided to take a spin in the Dargel 23 Kat.I was sold.

We ran Dean’s boat in every direction across some serious chop and never got a bit of splash.The ride was smooth as one could hope for under the conditions. We also ran her through some shallows proving that the draft was much better than I had expected.

Back at the dock, Dean introduced me to Ian Schill with Dargel Boats. I’ve talked to a good many boat builders during this search and none made me as comfortable hammering out a deal as Ian. It just so happens he loves fishing the beachfront-nearshore zone and completely understood what I was looking to accomplish. My only real concern was fly rod storage. Poling skiffs all have under-gunnel rod storage with tubes under the front deck to protect the rather delicate tips. Ian and I put our heads together and came up with a solution by building the rod storage into the raised floor beneath the console.

That is one on the great things about working with a custom boat builder. Generally speaking, they can build or modify the boat to fit your needs. It also doesn’t hurt when the guy helping you design your boat is a passionate fisherman. Ian mentioned several ideas for the boat that I hadn’t considered that will make this boat capable of handling my main mission of guiding fly fishermen along the beachfront, yet versatile enough to run bay trips or mothership kayaks into back lakes.

The hardest part in this whole process is the waiting. I’ve been through it before and I’m a pretty patient guy by nature, but this is absolutely killing me. It takes everything I’ve got to resist calling them every other day. I feel like the kid in the backseat, “Are we there yet?”

And, in a cruel twist of fate, it appears the boat will be ready late next week. I say cruel because as it stands I’ll be picking it up the day before I fly to Orlando for a week attending the ICAST. I figure the Gulf will be dead-flat all week with tarpon frolicking all along the third bar.

Upon my return I’ll be doing some shakedown runs to learn the boat and get a feel for how she handles. By the time you read this I’ll be open for booking trips. It’ll be prime time for prowling the nearshore waters from now through September and on into October (depending on the weather patterns). We’ll be targeting tarpon, kings, ling, dolphin, snapper, Spanish mackerel, jacks, tripletail and anything that wants to show itself. I’ve got the fly gear to handle any of them if you don’t possess some of the heavier sticks. I’m also open to throwing conventional gear if fly fishing isn’t your thing. Tossing a fly or lure into a feeding frenzy of big pelagic fish is a thrill you need to experience.

I’ll still have the poling skiff in the stable for sneaking around the shallows chasing redfish if offshore isn’t your idea of fun, or in case the weather doesn’t allow venturing out through the jetties. The addition of the Kat will allow me to offer more variety to my customers; everything from mothershipping kayaks to conventional wading trips, to prowling around beyond the jetties.

Are we there yet?