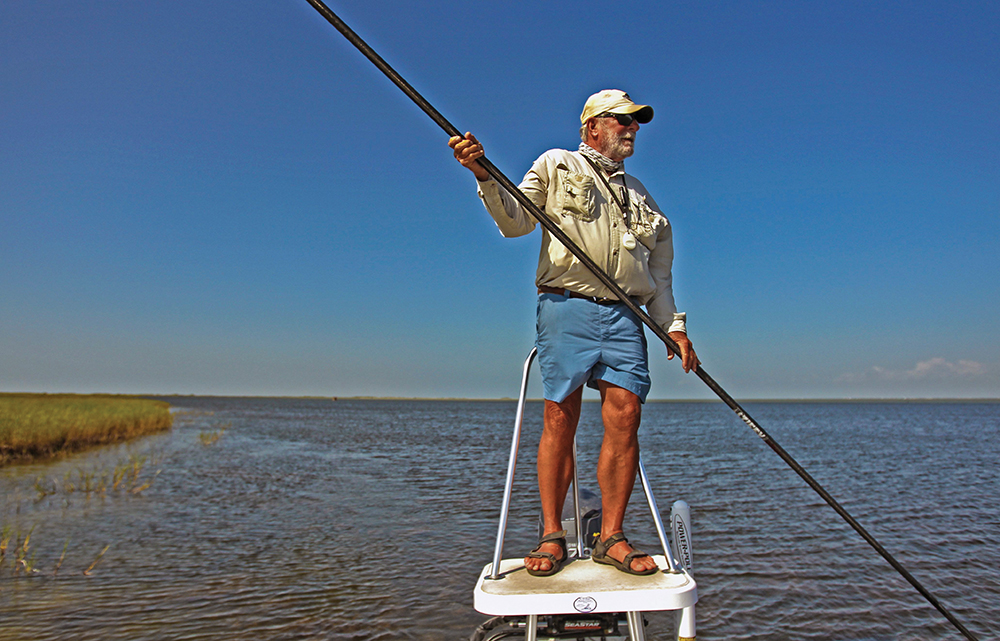 I’m going to take a wild guess that since you are reading this magazine you tend to spend a good bit of time on Texas bays. And, given that, you have also likely observed some form or another of rude and inconsiderate behavior exhibited by fellow fishermen. Perhaps you’ve even done a few things out on the water that you aren’t particularly proud of. Be it cutting off someone’s wade, motoring just downwind of a drifting boat with anglers fishing, maybe jumping onto a shoreline ahead of a poling skiff, paddling your kayak through a group of waders, or my personal pet peeve – burning miles of shoreline a few yards off the bank.

Unfortunately, these acts have become more common than rare these days. I know the vast majority try to do right, but it seems that the minority group of screw-ups (I really wanted to use another word but decided not to incur the editor’s wrath) has been steadily growing. Hardly a day goes by that I don’t witness at least one incident and most times there are multiple violations of etiquette and/or common sense scattered throughout a trip. If you are feeling particularly victimized, all you have to do is peruse the posts on social media to quickly realize you aren’t alone.

One man with a very long history on our coast has decided to try and do something. Captain Chuck Naiser has been guiding fishermen in the Rockport area for more years than he cares to admit. He has seen a lot of changes on the water over the years, some good and some not.Chuck was up to his armpits in the “redfish wars” along with the founding fathers of the original Gulf Coast Conservation Association. He understands what it takes to be “all in” for a good cause. If not for the tenacity of those men we likely wouldn’t have any redfish to worry about.

His latest idea was to form a group known as FlatsWorthy - “A diverse group of anglers with mutual respect.”In his words, “I don’t know what the hell I’m doing but I know why I’m doing it.And I won’t quit. This is too important.”

In the summer of 2015, at the request of Chuck Naiser, I was one of a diverse group of watermen gathered in a small cafe on the Lamar Peninsula. Attendees included fishing guides, recreational fishermen, and duck hunters. Quite a cross-section of user groups - waders, bay boaters, kayakers, poling skiff operators, and airboaters.

It was a good meeting in which Chuck outlined his reasons for wanting to start a dialog amongst the various user groups. It was his hope that through communication, better understanding and education, we could reduce the conflicts among users occurring on the water. Grievances were aired among the groups and became the catalyst for the foundation of FlatsWorthy.

I walked away from that first meeting thinking that he was onto something, but the problems and hurdles would be many and large. Changing attitudes and behavior isn’t easy. Based on that meeting as well as subsequent conversations, Chuck came up with a basic code of ethics to describe how one could become “FlatsWorthy.”

*Be considerate toward the space, time and efforts of fellow anglers.

*Know before you go. Look for others before entering a fishing area.

*Participate in opportunities for public comment on proposals for new and revised regulations.

In addition to these basic tenets, a more detailed explanation of ideas on how to better conduct yourself on the water can be found on the website www.flatsworthy.com. These can be found under the User Groups tab and has sections for poling skiffs, kayaks, waders, airboaters, shallow-draft boats, and also guides and tournament fishermen. It is a well-thought-out set of guidelines that if everyone followed, all of us could better enjoy our time on the water.

Since that initial meeting the group has steadily gained traction, although the devastation of Harvey stalled progress for a while. Chuck’s home was literally in the eye of the storm. Now that things have gotten somewhat back to normal he’s running full speed and the organization is growing faster than he ever imagined.

Chuck explained it well during a recent conversation. “I’m not trying to tell people what they can or cannot do, that’s not my place. I’m only asking them to think about what actions they are unnecessarily taking and how it affects others. They are making more boats every day, but there isn’t going to be any new water. We all need to learn how to get along before there is a critical incident that leads to some form of restrictive legislation that none of us want. I don’t believe new laws or regulations are the answer. The answer is education, understanding and cooperation.”

But it isn’t all about the direct and obvious conflicts among fishermen trying to share the water, it is also about the fish, birds, other wildlife, and the habitat. Like it or not, we have changed the habits of our fish through our actions. Gamefish naturally feed on shallow flats. There’s a lot of groceries available there. It is also easier for them to capture that prey in shallow water where it has less room to escape.

Chuck fondly recalls the heyday of redfishing following the banning of commercial nets, as do I.Yes, we still have reds prowling shallow water and sight-fishing for them is still viable, but it isn’t like it was. You simply cannot continuously run across shallow flats in large boats under full power and expect the fish to not change their habits. If every time you walked into your favorite restaurant someone drove a truck through the joint it wouldn’t take long before you found another place to eat.

Our shallow water gamefish are adapting to the pressure. I see far fewer really large schools of reds up shallow in areas that get “burned” regularly. The scattered, smaller schools and singles I do find are generally much more alert to intrusions. Undisturbed and calm fish are becoming increasingly rare and, on busy summer weekends, you have to get well off the beaten path to find them. They either push further into smaller waters or drop off into the deep.

Chuck summed it up quite well during our last phone conversation, “We can’t fix it all, but we need to fix what we can. There isn’t anyone to look towards but ourselves. We need to educate this generation so that the next will have a better understanding.”

Take a look in the mirror and ask yourself; “Am I FlatsWorthy?”