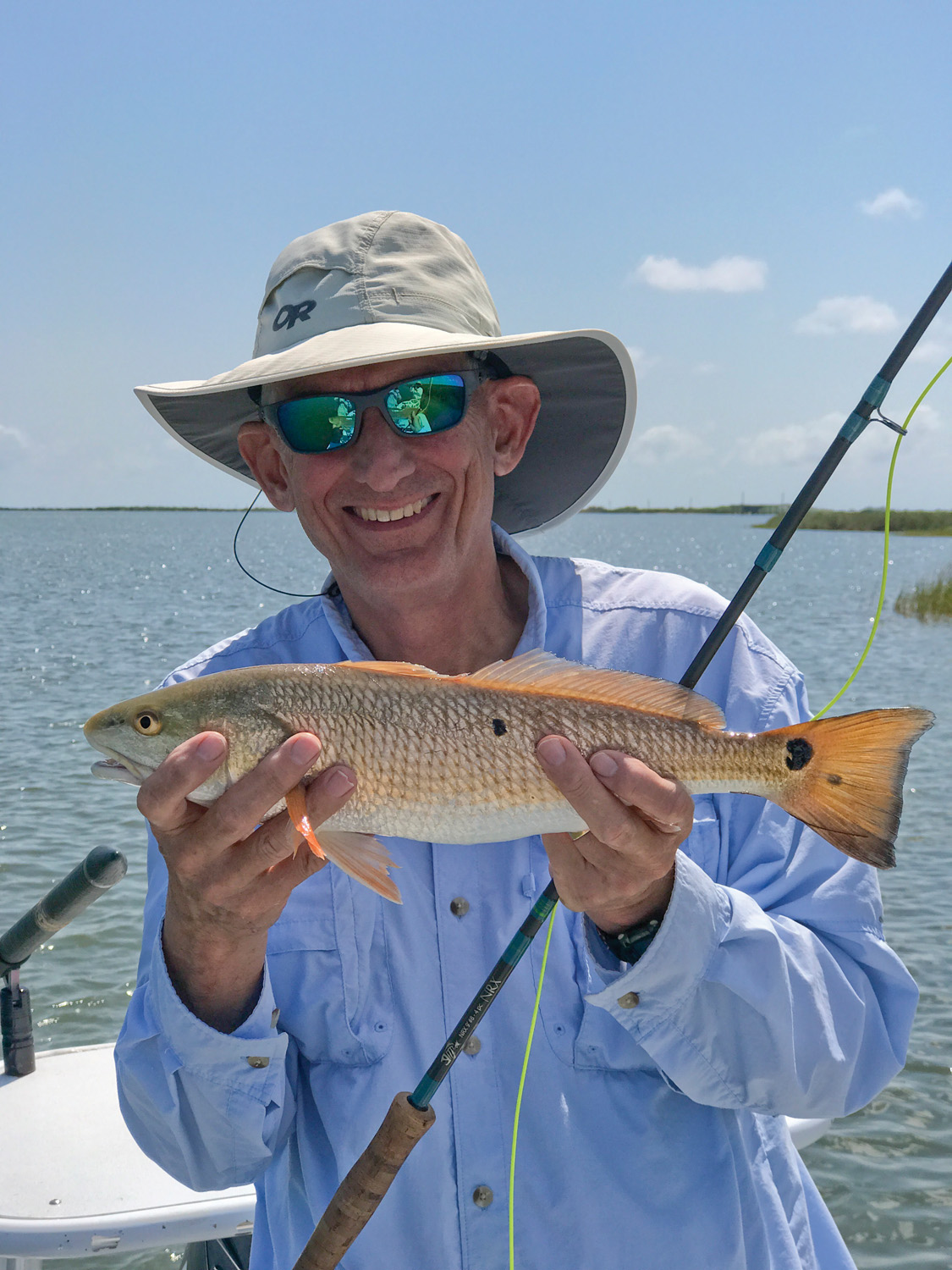 I can’t begin to tell you how many times in the last few weeks I’ve answered the question, “How’s the fishing after the storm?”Well – it’s fantastic…and it sucks. Yeah, that’s the way it has been for me. Feast or famine. Sometimes both in the same day.

In normal times, I can count on at least finding a few fish in most of the places I go to take a look. Even when the fishing is slow you can count on scattered reds to keep things interesting. And, if I pole around through enough backwaters or cross enough grass flats, we’ll scratch out a decent day. However, these last few weeks have not been normal.

My first day back on the water was interesting. Fairly strong north wind for a few days had pushed the tide high into the lakes on Matagorda Island and kept me shorebound longer than I had planned. This morning had dawned clear and cool without so much as a breeze. I left out of Charlie’s and buzzed across a glass-slick Espiritu Santo. It felt great to push the throttle down again.

I burned plenty of fuel and poled pretty much every reliable back lake on the island throughout the morning. The problem wasn’t a lack of fish so much as a lack of clear water. That’s kind of important in my sight-fishing game and I had fly fishermen due in the next day. As I poled around, I could hear the distinct sound of spooked reds under my hull, I just couldn’t see them.Most of the lakes and shorelines were holding a funky grey-green silty-looking water. I thought a couple weeks would be enough time to settle out, but I guess not. I made my way to Power Lake and as I came through the entrance I could see the south shoreline and cove was a nice dark color. Clear water at last.

I eased into the furthest cove and hopped up on the platform. The water was tannin stained, but plenty clear to see the bottom - and the sulking eight-foot gator. No matter. I was poling and feeling upbeat. After a couple hundred yards I was feeling less enthusiastic. No bait, no crabs, and definitely no redfish. I pushed on for a while longer without a change in results.

I got down to get a drink and do some thinking. While sitting on the gunnel pondering what this place had been like as Harvey passed through I took a taste of that tannin water; not the slightest hint of salt. Apparently, the rainwater draining off the island had gotten trapped back there. Time for the next great idea.

On the way into the lakes I’d noticed there was a sliver of clearer water along the open bay shorelines so I headed back out. By this time the relaxed winds and falling tide was letting all of that stacked-up water flow out of the lakes. I’d find little clear stretches every so often, but then I’d get close to a drain and all that silty stuff would be pouring out to muck up the joint. What I needed was a longer stretch of shoreline without drains.

I took a little ride over towards Pringle. The water off the point by Rahal was looking pretty nice.The wind had picked up out of the west and the afternoon sun made things right for poling from there towards the main entrance. As I shut down and climbed up on the poling platform I spooked a little pod of reds that had been tight to the shoreline. Sweet. The next hour or so was awesome. Singles, small pods, a couple decent schools and even some scattered larger trout all the way down to the Pringle entrance where things mudded up a bit. I had easily seen a couple hundred fish and could see the clear water picked back up on the other side, which gave me confidence that I’d find fish on that side of the boat lane as well.

I went ahead and checked the back of Pringle since I was already there. The grass flats on the south side looked fairly good. The water wasn’t the normal crystal-clear clarity, but good enough for sight-fishing – and it was salty.My reward was two small reds in several hundred yards of poling. Feast or famine.

The following morning, I woke up ready to roll. I knew I had a solid bunch of fish located and a good pattern for locating more. The guys loaded up and we headed out. It wasn’t quite as cool and crisp as the previous morning. The south wind had brought summer back from the Gulf, but I wasn’t concerned. There’s a certain cockiness you feel when you know without a doubt you’re about to roll into a great morning with customers. I was feeling it. And then I wasn’t.

Where the hell did my fish go? We searched that entire shoreline and nary a redfish was seen.I checked tight to the bank on out to the deeper grass beds, zig-zagging like a drunken sailor.My initial thought had been that maybe they were staged a little deeper. My guys were primarily fly fishermen, but don’t have anything against chunking some hardware. While one was standing guard with the long rod the other was blind-casting deeper. Nothing. Well hell, it is really unusual to lose an entire concentration like that overnight. It was a weekday and there had been virtually no boat traffic.

I relocated to a similar area with similar results. Knowing what I’d found to the west the day before, I headed east thinking things might be better closer to the Gulf passes. It was better, but not by much. We scratched out some small fish here and there without finding any one area that was better than any other. It was a true grind.

The guys were happy to have been back on the water after everything our coast had been through. They had dinner plans and were ready to call it a day. On the ride back I saw a little pocket of clear water over thick grass and asked if they wanted to give it a go. Why not? As soon as I hopped up on the platform a tight group of tails started waving. Easy as that, perfect cast and fish on. As they switched out spots on the bow I spotted a second school of tailers and eased into position. Another nice cast and another immediate hook-up.