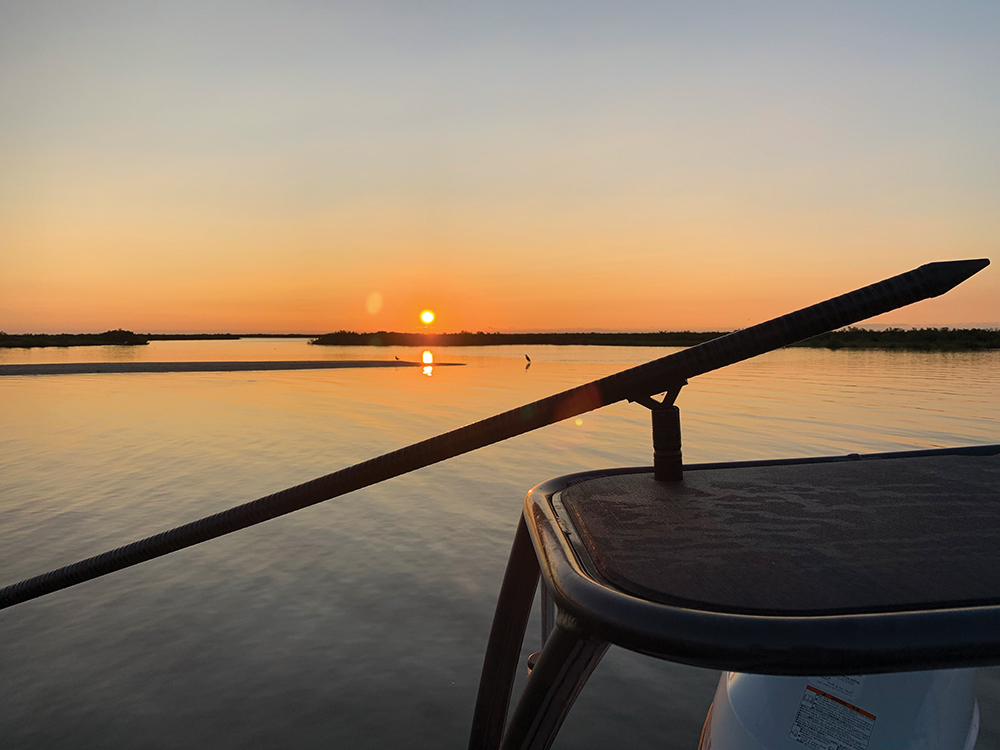 So, it’s back to the poling skiff until the silver kings migrate north again.

Well I suppose it’s time to switch gears. My favorite fish has headed to Mexico. It always takes me a few weeks to accept it, a sort of mourning period. I’ll still go out on the beachfront when conditions are right, hoping for one last group of stragglers. Tarpon get under your skin. The thrill of spotting them. The excitement of getting them to eat your offering. The amazement at their crazy acrobatics as they launch from the water. The appreciation of their power and endurance as they repeatedly refuse to come alongside the gunnel.

I truly love everything about these fish, even when they’re being stubborn and picky about eating a lure. They can certainly be frustrating. Some days it seems as though their mouths are sewn shut. Entire massive schools can completely disappear and relocate overnight. Many times you’ll be on top of the world with feeding schools all afternoon only to return the next morning to water completely devoid of fish. But for me, that hunt is half the fun of this game. If it were easy everyone would be out there.

The relatively small group of dedicated Texas tarpon anglers had an up and down season.  Tropical troubles, incessant southwest winds and dirty water far outnumbered the ice cream days. There were times when it seemed too easy and many more that left us scratching our heads. If anyone ever tells you they have Texas tarpon all figured out; they’re lying.

So what’s next? Well, I can still run out around the jetties and beachfront for bull reds and the tail end of the jacks. They aren’t tarpon, but they’ll school up on top, eat a fly and stretch a line.  That’ll work for those that want a big pull.

But my main focus will be poling the shallow stuff in search of redfish. I often get queries about whether or not redfish on the flats are available in the winter months.  Absolutely. In fact, some of the most consistent action of the year can occur during these months. The boat traffic slows down and the fish can settle in to shallow feeding patterns without getting buzzed all day by burn boats. Calmer fish are obviously easier to approach and feed a lure or fly. They’re also easier to locate consistently.

The opposite often occurs throughout the summer months. You can locate a good concentration of fish during the week and then lose them overnight because they felt too much pressure through the weekend. By the very definition, sight-casting requires being able to see the fish.  The places I prefer to prowl are shallow and clear, the same places some folks like to burn in their search for tournament fish.

To each their own, but it is more satisfying for me to find them in the old traditional way.  Combining past experiences and knowledge of current conditions to narrow down places to start the search is step one. Step two is putting in the time on the water. I spend many of my days off simply poling miles of flats, lakes and shorelines scouting for the next trip. Quite often I’ll never even pick up a rod and just observe what the fish are doing. I get more enjoyment out of putting all the pieces together than I do actually piercing a lip. Some folks will get that, others will think I’m half a bubble off.

Regardless your opinion of my sanity, now is a great time to be out on our bays. The periods between cold fronts can lead to some outstanding angling opportunities with little to no competition. Hunting seasons are in full swing, school is back in session, football season continues and, of course, there are all the holiday obligations. Then there are those who simply don’t believe the bay fishing holds well during colder weather. Each takes away a percentage of your fellow anglers.

Lack of traffic isn’t the only reason winter fishing can be productive. The availability of food sources can get pretty scarce. This leads to more aggressive fish that are more likely to be fooled into eating your offering. The shrimp are gone, the smaller baitfish numbers have been culled and there won’t be any replacements until spring. It can become important to “match the hatch” with your choice of lure or fly. Larger baitfish are often their main target so you want to match that profile, particularly when chasing trout.

Having said that, there have been times when I’ve found the reds to get rather picky. It usually occurs on the back side of a norther when the water has been chilled several degrees. The wind is dead calm and the water is as clear as you’ll ever see it. On those days a large lure in that shallow water seems far too intrusive. When you run across this, go smaller. I’ve thrown very small bonefish flies at reds with much success. Always keep something in the bag that is far smaller than what you’d normally toss.

I’ll certainly be chasing reds on the uncrowded flats throughout the winter. And I’ll likely make some long wades under miserable conditions hoping for that Corky thump. There will be many days spent in the deer blinds and maybe a few duck hunts thrown in too. But even while I’m enjoying these other pursuits, know that my mind is working on solving the tarpon puzzle. Then, before we know it, the first wave of silver kings will return from their winter vacation in Mexico.  And I’ll be there to greet them to do it all again.