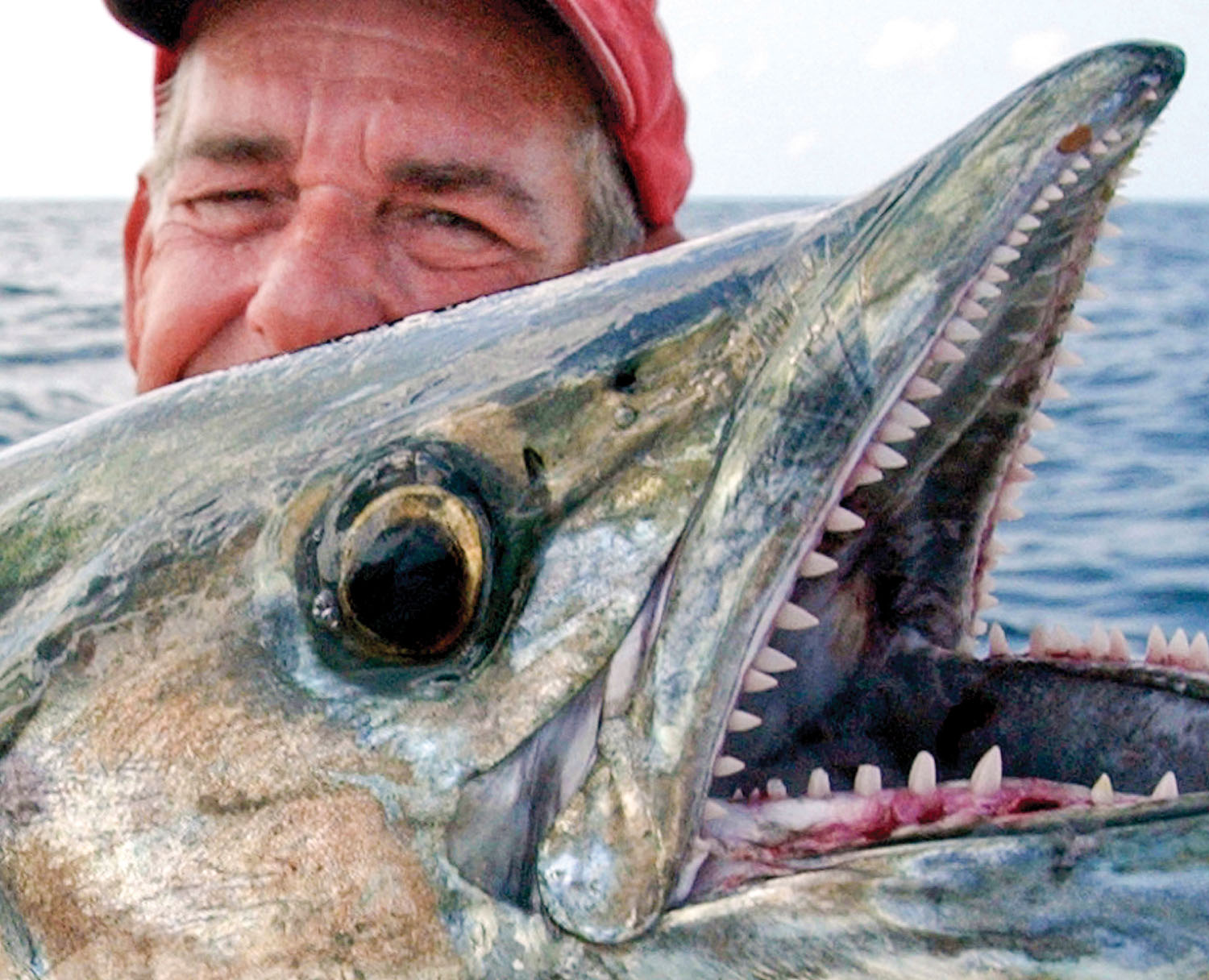 Dale Fontenot with another kingfish caught off Sabine Pass. Photo by Pete Churton.

This month is the real start of the summer offshore season, when big kingfish are prowling along the coast within sight of land. Some even wander and feed inside the jetties at Port O’Connor and Aransas. Which is a shock, for anglers accustomed to long boat rides offshore.

You certainly don’t need a big boat to fish within sight of land, but keep in mind the winds of June can be cruel, sometimes blowing for the entire month. Mornings are usually better than afternoons, but not always. If a calm stretch of weather does arrive, you can bet it will be during mid-week.

Probably the easiest method for snatching a limit of these fish is to troll diving plugs in the first clear, green water you can reach. A color change off the beach usually works, but also try an incoming tide near the jetties, or even an outgoing tide in the ship channel just offshore, marked by buoys. Deploy several big-lipped plugs that dive deep, along with the old standby Russelure, now made in Houston. Other critters will hit these big plugs, of course, especially the jack crevalle.

As a precaution, keep in mind that reeling these plugs back to the boat under pressure, with the boat cruising along, can cause these lures to leap out of the water and into the cockpit. And they carry big, strong, treble hooks. A more rare danger would be for a kingfish to charge the lure when it is right at boatside, jumping and landing in the boat. One angler was reportedly speared in the gut by a jumping king, almost knocking him overboard. His plastic rod holder took the main hit and saved him, except for a bad bruising. It must have been a sizeable fish.

So, these trolling plugs are very productive, they just have to be retrieved carefully. They are not practical for catch and release; by the time the hooks are pried loose, these fish are beyond saving. Smaller kings of a yard or so long can be lifted and swung into an open cooler, after the crew has cleared the way. No gaffing and no blood. Just slam the cooler lid and wait until the thrashing inside subsides. Peek inside the cooler and then reach in with long-nose pliers, to release the lure for another go. If the king is too big to lift into a cooler, gaff it and bleed it over the side, with maybe a rinse, before hitting the ice. Just remember, there are mercury health advisories for eating kingfish bigger than about 16 pounds. We like to eat the small ones of eight pounds or so, steaks cooked on the grill, and always try to release the big ones except for a possible tournament winner.

Finding live trolling bait for kings is time consuming and really not worth the effort, in my view, unless live bait can be found around a platform or buoy offshore. If you’re trophy-hunting close to the beach or jetties then a live, 12-inch mullet swimming in the wake is hard to beat. That’s assuming a crew member has a cast net, knows where the mullet are, can catch them, and the boat’s live well is functioning. Also, big live mullet don’t last too long in a live well, they become bruised and lethargic. That’s why marinas don’t sell them. A hard-wiggling, big diving plug is much more efficient, time-wise. And who knows, you might hit a hungry 50-pound king the first trip out in June, like I once did.

As mentioned earlier, the small boats can reach these fish. The kayak guys out of Aransas regularly catch 30-pound kings. They mostly use live bait or dead ribbonfish, but they also sling lead-head jigs that cover the water column. For those who want to see big kings landed by kayak, Kevin Kieschnick's Bluewater Kayak Classic tournament is based out of Packery Channel each August. That’s when several 40-pound kings are usually landed from their small, plastic boats, along with a variety of other fish. Ribbonfish are the preferred bait for their kayaks, because both are built for slow trolling. With a powerboat, it’s best to bump-troll ribbonfish, putting the boat engine in and out of gear and taking it slow. Or try drifting behind shrimpboats and those old, rusty platforms in state waters. (Shrimpboats in state waters may be in short supply until their usual season opener begins on July 1).

Kingfish are sporty gamesters available to almost anyone off the beach, and now’s the time to get them. For more advice, stories, tackle and tricks for catching these fish, my updated kingfish book is available at Seafavorites.com