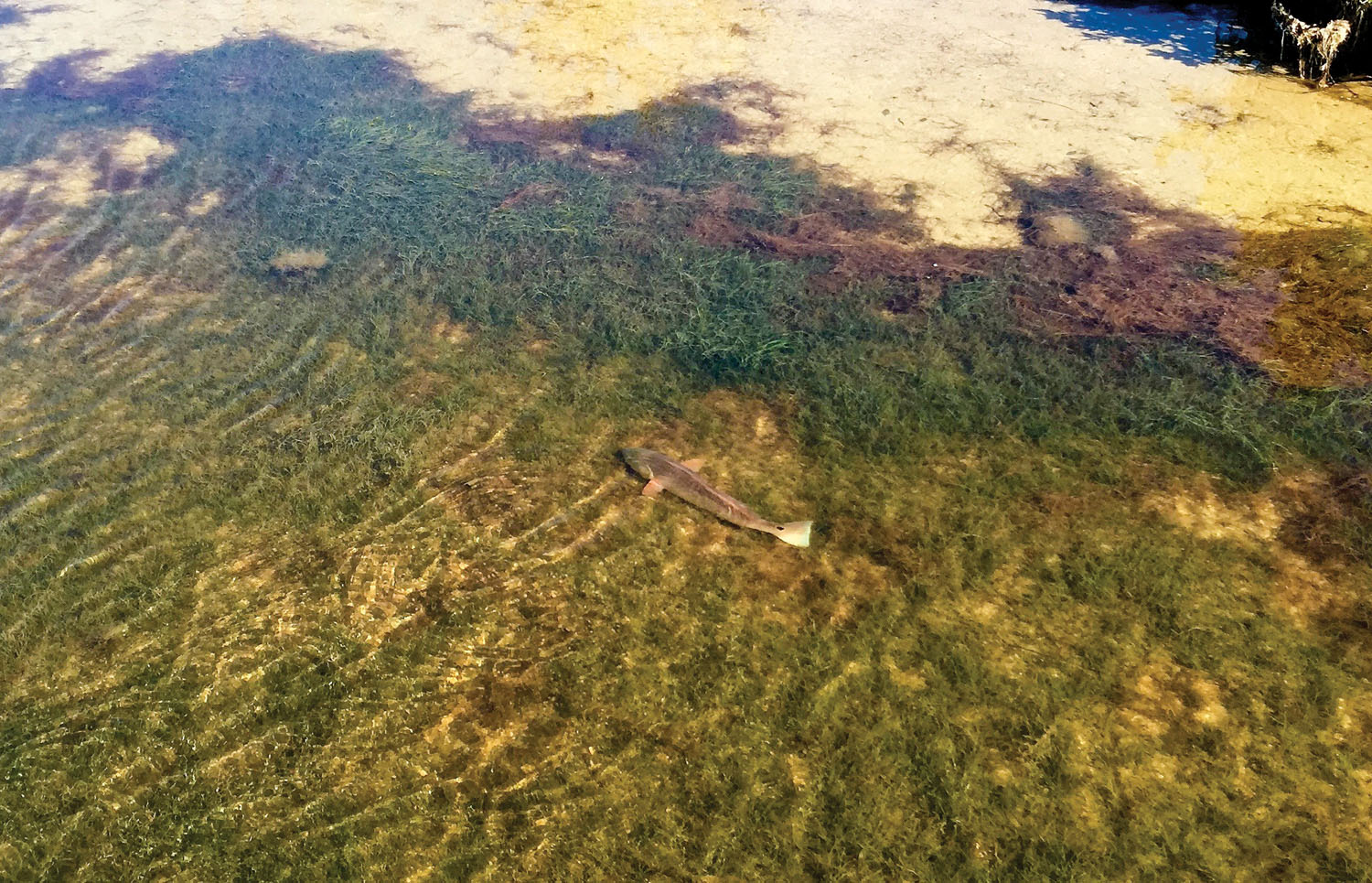 Yep, I’m hooked on this place!

I’ve spent the last twenty-five or so years concentrating on sight-fishing in one form or another. Most of the time the target has been redfish, but I’ll throw at pretty much any fish I can see that might eat a fly or lure. Over the past thirteen years I’ve been guiding sight-casting trips from atop the poling platform of a skinny-water skiff. Most of my guiding has been in the generally off-colored water of the Galveston Bay system. I would occasionally slip down to POC or Aransas Pass to run a trip or two when a regular customer requested, but most of my time in the clearer waters of the middle coast were for personal enjoyment.

Recently, Camille and I finally made our weekend place between Seadrift and Port O’Connor our permanent home and I’m now guiding the POC area. I first fished POC thirty years ago.Camille’s dad introduced me to the place by dropping me and a buddy off near the old Army base and wishing us luck. He and Camille then buzzed off out of sight in his old bass boat. It was barely light and we had no idea what we were doing, but we were fishing, so it was all good.

Prior to the trip, I quizzed some of my buddies who had fished “down south” and picked their brains about how we should go about it. The most consistent advice was to throw soft plastics or gold spoons around the edges of the sandy potholes. Topwaters weren’t nearly as popular back then as today and, I was warned that my trusty MirrOlures would just be grabbing grass all day.

How will I know where these potholes are so that I can work the edges?

Seriously? I’d never really fished anything much better than “trout green” with maybe two-foot visibility on a good day.

And grass?We had a few patches on the south shoreline of Christmas, but it wasn’t really enough to foul a lure.

So, there we were, bailing off the bass boat at pink light. I remember the first sensation being the really firm bottom. We were used to wading mud unless we were somewhere near San Luis Pass or in the surf. As I started to shuffle away from the boat I could feel the thick grass around my ankles. Even in the low light I could see my white Converse high-tops through the thigh-deep water. Cool.

It was still too dark to see those alleged sandy potholes so we spent the first hour easing along chest-deep, fanning casts away from the shoreline like we would in Galveston. It wasn’t exactly working out for us.

Then I heard the crash of a feeding fish behind me and I spun around in time to see a shower of baitfish reentering the water. A long cast was met with a serious thump followed by line peeling off the old red 5500. I was a pretty serious trout guy back then and just knew this was THE big girl.

But the thrashing headshake never came. The fish stayed low and strong all the way to the end.It was the biggest red I’d ever landed while wading. Up to that time the extent of my redfishing had been catching bulls off the Seawall piers. Very cool.

By the time I strung the red the sun had gotten high enough to shine some light on the situation.I can still see those first beautiful sandy potholes sprinkled across a carpet of seagrass up towards the shoreline. I was stoked. From that point on we worked much shallower and pounded every pothole for more than a mile toward Lighthouse Cove – with not another fisherman in sight. Epic!

As my father-in-law pulled up, I’m sure we were grinning like idiots. We were used to hitting the trout pretty hard but neither of us had ever loaded a stringer with trout, reds and flounder. I do not recall how many fish we caught but it was a lot and I was hooked on the place. My mind drifts back to that memorable morning every time I pass the spot.

Over the next several years I fell in lust with other areas, from Rockport down to Port Isabel, but I always came back to Port O’Connor. The combination of clear water, good fishing and a reasonable drive from Houston made it an easy choice.

As my time with the Houston Police Department was winding down we started looking for our eventual landing place. It took a while but, here we are loving life on our little 80-acre spread, far from the craziness of the big city. I can be on the water inside of ten minutes or walk out on the back porch and watch the deer and turkey in the yard. Life is good.