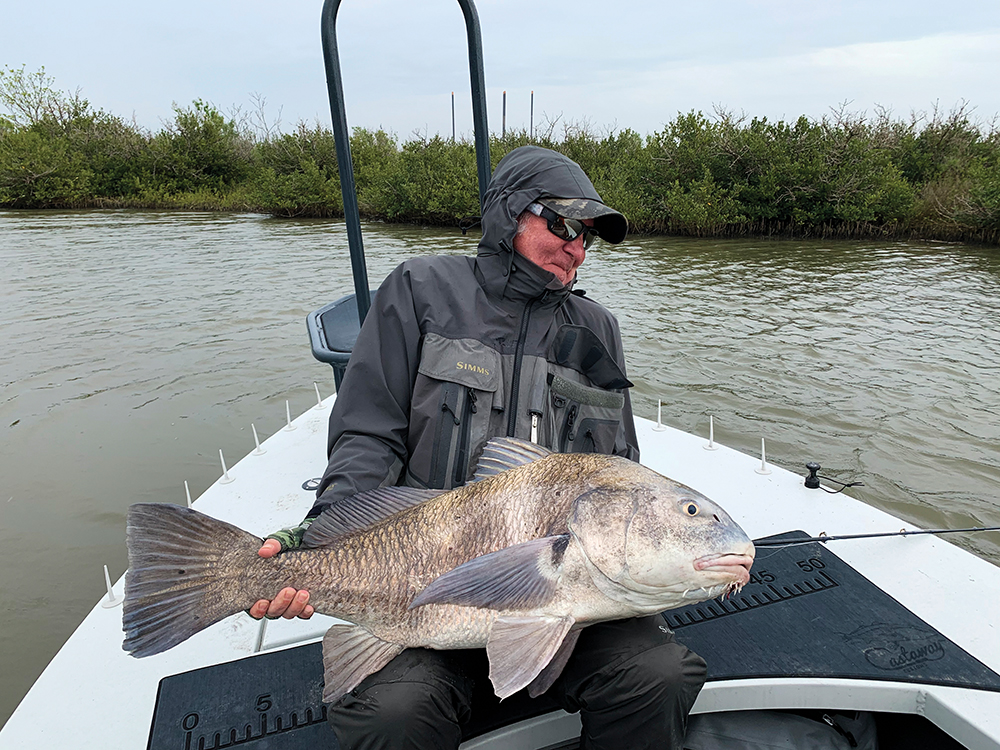 Talked Dan into holding a slimy "big ugly" in his lap for a photo.

A couple weeks back I set my sights on our neighbor to the east, hitched up the Sabine skiff, gathered some fly gear and started driving. I love my home waters, but every once in a while I get the tug to go play in someone else’s backyard. Good friends Dan and John were able to break free of their responsibilities and meet me there for a week of chasing bull reds in skinny water.

Over the last several years I’ve made my way to Grand Isle, Louisiana to guide for a month or two. I didn’t go last year and heard some reports that the fishing had fallen off from previous years. I was a bit uncomfortable with booking up a bunch of trips into uncertain waters this year and decided it would be best to just go exploring a bit.

When this crew gets together the weather almost always craps out. It is uncanny how we can flip a forecast from gorgeous to dammit, just by hitting the booking button on a beach house.  The plus side to going with these guys is they won’t let the weather stop them unless it gets totally silly. Poling a skiff and flinging flies in 25 mph winds isn’t exactly ideal but as Dan is fond of saying, “I’ll fish that.” And so we did.

The first morning dawned slick calm with scattered clouds, but a promise of quickly rising winds by late morning. We made a run to an open shoreline where I’ve always found fish hoping to take advantage of this little window. I knew full well this spot would get wiped out for several days with the predicted blow. Any west wind really jacks with the water clarity in most of the areas I fish over there, but this favored area really takes it on the chin.

The water clarity wasn’t perfect, but it wasn’t horrible either. Fish were spotted. Casts were made. Laughs were had. Nothing was hooked.

The wind followed the script and crept higher throughout the morning. The problem with a west wind in this area is the incredible amount of marsh erosion it causes. There are about thirty miles of deep, wide open bay water allowing for quite a bit of wind fetch. We always hear about how much marsh Louisiana is losing annually and it sounds bad. Seeing it in person is shocking at times. In the few years I’ve been fishing this area I’ve watched entire large islands completely disappear. Places that were once sheltered lakes are now open coves.

Three years ago I ran across some college students placing PVC markers in a grid on a marsh shoreline. I stopped to chat with them and found they were working on a graduate project regarding the erosion. The first line of markers was placed about two feet into the cord grass.  This year those poles were four to five feet out into the water. According to one study I read, over the past 25 years, Louisiana has been losing a football field an hour on average. Of course hurricanes and such skew that number, but it is still staggering to observe firsthand.

Back to the fishing. We moved around quite a bit and hid from the wind the rest of the day. The constant west wind pushed the tides higher than predicted as well as mucking things up. I eventually gave up on the outer bay shorelines where the bulls tend to hang and headed into some back lakes. I knew our chances of finding the bulls we were after were slim, but we’d have to be satisfied with the 25-30” fish usually found in such areas. On a normal tide these places are treacherous minefields of oysters. With the exaggerated high, we were able to pole places I’ve seldom ventured.

As we rounded a point of marsh I spotted a ghostly shape gliding through the murky water.  John had the bow and made a perfect cast. The fish ate with gusto ripping into his backing. I wasn’t really sure of the size when I first saw it, but when that thing wallowed up top it became clear this was a monster bull, not at all what I expected way back there. A nervous battle among the scattered oysters ensued with the fish doing pretty much what he wanted for a good while.  Somehow John managed to keep the rod high enough to clear the obstructions and the bull eventually conceded. A beautiful 42” red caught on the fly in about a foot of water. Doesn’t get much better.

Over the next couple days we battled through the wind, heavy overcast, scattered rain showers, high water, and murk to scratch out a few fish here and there. Most were huge black drum that we found tailing in some backwater areas around shell. Conditions led to blowing out a lot of reds right under the bow that we never saw.

Day four was a complete washout as a front blew through with 35 mph winds dropping lots of rain along with the temperature. It was a good movie day.  Knowing how volatile the weather can be this time of year we always figure on getting blown out at least a day or two. The forecast called for dropping winds and clear skies the next three days. Deal.

Behind the front there was still plenty of wind early, but towards dark it slicked off and the tailers started showing. We had a pretty good session the last couple hours of the day. Nothing huge, but plenty fun. There were positive vibes for our final two days as the weather folks promised light winds and clear skies.

And it actually happened. Dead slick and blue skies. Conditions allowed for a run out to “the islands.” I’d told the guys about this place but they’d never been with me when it got calm enough to make the run. It’s a ten mile run across wide open water, not something you care to do in a poling skiff with 20 mph winds.

The run couldn’t have been any smoother. We slid into a big cove and started poling. Crap.  Dead water. No reds, drum, sheepies, or even bait. Sure was hoping I hadn’t oversold this place. And then we found them. The super low tide had everything on some scattered reefs in the middle of the cove instead of tight to the shorelines. No true bulls, but plenty of upper-slots and just-overs.

The final day dawned perfect once again. There was no debate on where we were heading, right back to the islands. After a satisfying morning session I asked if they'd like to keep on enjoying these solid fish or swing for the fences with another long run to some even more distant island in hopes of pulling off some bulls before the ride home. It was a gamble as this place requires clear water to produce and after the whacky weather I wasn’t sure what we’d find. The answer was immediate and we were off.

We arrived on the expansive sand flats with just a sliver of an island separating us from the Gulf of Mexico. The water was clear and shadows of large fish were moving in all directions. Perfect.  Except they were all big old drum. Dan got one that pushed the tape to 36 inches. Fun, but not what we were shooting for. Dan still hadn’t picked up a true bull on this trip when his turn on the bow came back around. I told him it wasn’t quite the bottom of the ninth with two outs, but the closer was warming up. So he steps to the plate and jacks a walk-off. Forty-three inches of gorgeous bronze bull redfish. Best fish of the trip. High-fives, grip and grin photos and a clean release.

The long sunset run back to the dock had a very satisfying feel. We’ll be back.