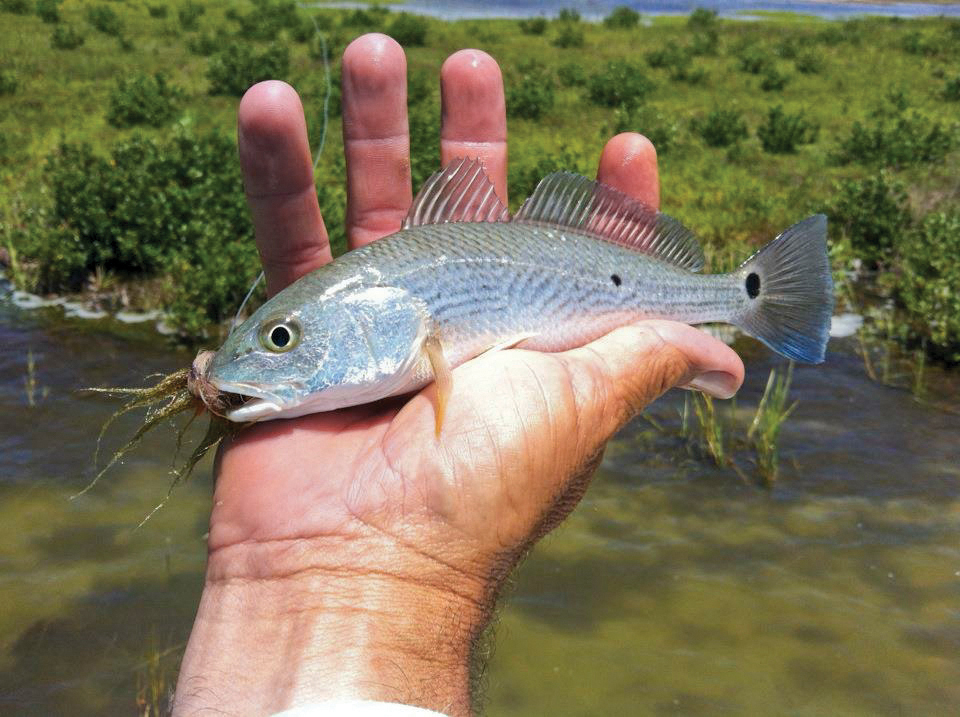 I’m a pretty simple guy when it comes to what I typically throw to redfish. I’ve seen all sorts of things in their stomachs over the years and often refer to them as the garbage disposals of the flats. During teal season I cleaned one that had a shotgun hull in his belly. I know lure manufacturers don’t want to see this, but most days I don’t think it really matters what color or shape the lure is. From my position atop the poling platform I’ve watched thousands of redfish eat and honestly it is more about location and movement. A cast that puts the lure or fly in their feeding zone and then retrieved in a way that appears somewhat natural will generally get eaten.

My typical lure box for a day of chasing redfish will have some topwater plugs, weedless gold spoons, a couple different sizes of paddletail plastics rigged weedless and some DOA shrimp.Color-wise, it doesn't look like a box of Crayolas. Most will be in somewhat natural colors with the exception of some of the paddletails having a chartreuse tail. If I were in a position where I had to live off of what I caught and could only have one lure, it’d be a three to four-inch paddletail with a dark-colored back, light-colored belly and a chartreuse tail rigged on a weedless eighth-ounce hook. For the life of me I don’t know what that tail looks like to a fish, but it works.

As for flies, I’ve got my go-to Redfish Crack fly tied in a couple different colors and sizes. It has all the attributes that make a fly work. It pushes water, has contrast, and the tail moves with the slightest twitch. It’s a simple fly to tie and it works. If conditions allow, I’ll throw a popper in there too; not because it is more effective, but because they’re fun.

I think some of my customers are disappointed when they peak into my arsenal and it looks so…well, blah. It isn’t real sexy, but it gets the job done. Except when it doesn’t.

Of course, there are days when the fish just aren’t eating for one reason or another. Maybe they had a huge feed on a hard-falling tide the day before. Perhaps there was a serious drop in temperature that has them a little stunned. I’ve seen them get really lethargic when the water gets extremely hot and oxygen levels drop. When they get like this all you can do is keep banging on them and hope you can irritate one into eating. Sometimes these days just turn into sight-casting practice and it doesn't matter what you throw at them. Thank goodness it doesn't happen very often.

Then there are days when you can see really active reds feeding but can’t buy a bite. These are the days that can drive you nuts and lead to a pile of lures stacked on the dash. Most often these situations occur because the reds are keyed in on a very specific prey. You can change colors, lures and flies all you want, but if you don’t figure out what they’re feeding on it won’t matter.

This tends to happen most often in the spring when there are sudden flushes of a certain food source due to a large hatch but can occur any time of the year. When there is an over-abundance of a certain prey the fish will key on that and ignore everything else. Fly guys on the rivers always talk of “matching the hatch” and it is crucial to their success. Just recently I’ve run into a couple situations where there was a need to match the hatch. One worked out, one didn’t.

I pulled onto a glassy-smooth grass flat at daybreak and immediately spotted a line of reds pushing the shoreline toward us. My customer hopped up on the bow and I poled the boat into position. The reds kept coming. We could see them making short dashes and kicking up small splashes. Everything was perfect…until it wasn’t. Three good casts to the front of the pack went totally untouched. I swear it looked like they parted to go around the fly. No problem. There was another school of tailers not far away. Same results.

Well on about the fourth school I saw the problem. There were what I would call micro-shrimp jumping out of the water ahead of the fish. They were keyed in on those and wanted nothing else. I keep a box of tiny bonefish flies for these situations. A size 8 Crazy Charlie was the ticket to a damn good day. Had we been throwing conventional gear it would’ve been tough to match the size, but one of the new 2.75” DOA shrimp in Near Clear or Gold Glitter would’ve been worth a shot.

The other situation occurred when a friend and I found a bunch of reds feeding at the mouth of a culvert. The tide was falling with a norther and pulling water out of the pipe from a brackish marsh. That water carried with it a cloud of tiny shad, so tiny that they looked more like glitter than baitfish. The reds were just slashing through the clouds for a mouthful and not targeting individuals. We threw everything in the boat at them without much luck. As far as we could tell there was no way to duplicate a really large ball of pinhead-size shad and we left defeated.

I’ve had this same scenario crop up in the past, but the bait was slightly larger, about the size of a dime. In those situations, I absolutely wore them out throwing a bass-style spinnerbait with a white rubber skirt. I guess it was a reasonable enough imitation of a small school to get them to eat. I’ve also had luck with a small spoonfly allowed to flutter down as if wounded.

One other situation to be aware of is a crab hatch. I haven’t had it happen yet this year, but it likely will at some point. There will be a time when the reds are slowly cruising the edges of the marsh grass as singles or maybe a loose group of three or four. They’re active but there’s no obvious signs of feeding other than occasionally poking at the bottom or mud banks. They’ll appear to be easy targets yet refuse to eat the typical lures or flies. If you run across this, try throwing a small crab fly way in front of their path and slowly crawl it in front of them.

I figured that scenario out years ago after finally catching a single fish through three frustrating days. Even though I couldn’t detect any feeding activity, this dude’s belly was bulging. I kept that sucker for dinner and checked his stomach to find it stuffed full of nothing but very small crabs.It pays to watch what’s going on around you all the time, but particularly when the fishing gets tough. Sometimes it’s a really subtle clue like a micro-sized shrimp jumping. Then again, it might be a belly jammed full of tiny crabs.