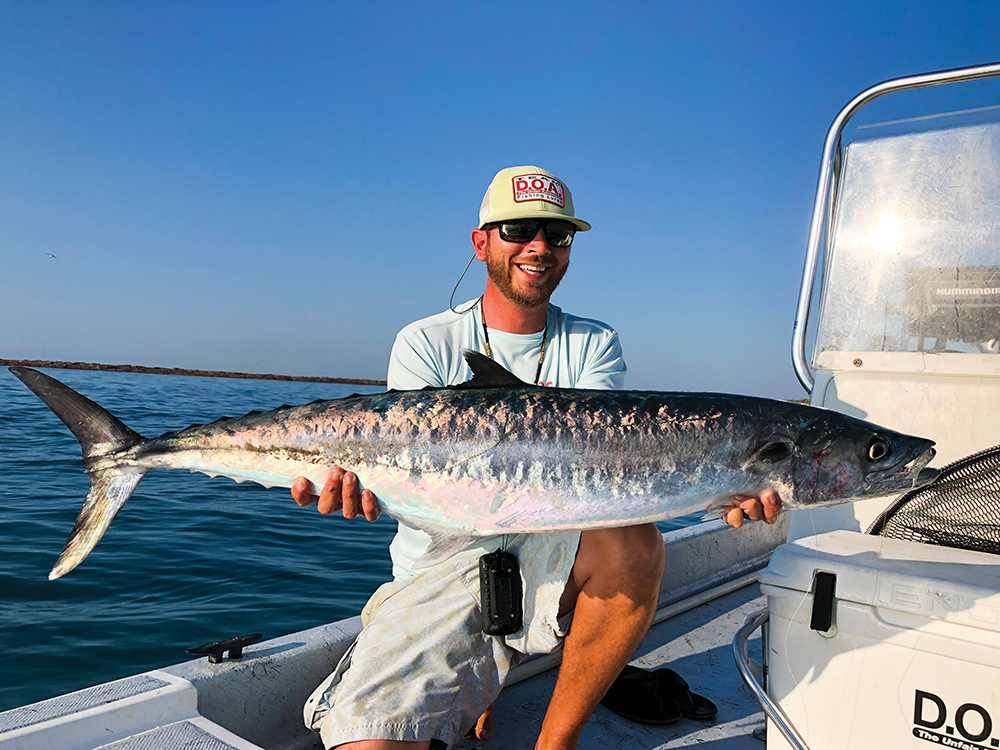 When people talk about sight-fishing along the Texas coast, whether fly or conventional, thoughts generally turn to redfish. It is perfectly reasonable to do so as reds are the most common and easily available targets. They’re also quite cooperative and tend to fall for a fake with gusto. And, for eight months out of the year, they are my main target on guided trips aboard the Sabine Skiff.

What’s different about those other four months? Well it’s really hot in the shallows leading to somewhat lethargic reds, it’s summertime crowded on the flats, and I’m honestly a little bit tired of doing the same thing every day. But most importantly, there are tarpon…and kings, ling, jacks, tripletail, dolphin, bonito and Spanish mackerel to be had. All of these can be sight-fishing targets in our nearshore waters, June through September, and even into October.

When I was a youngster I fished with my dad a good bit. We mostly hit the bays and maybe the jetties from time to time chasing trout, reds and flounder. About the time I hit my teen years dad bought a nineteen-foot Galaxy with a 150-horse inboard/outboard. After gaining some inshore confidence we pointed the bow towards the sunrise and headed out through the jetties. It was a whole new world “out there.” The green-tinted bay water gave way to blue-green and then deep indigo blue. I’d never seen water that looked like that.

As we pulled up to an oil rig to tie-off I was mesmerized by all the fish swimming inside the legs of the structure. Most were spadefish, but one was a large lumbering shape that looked somewhat like a shark. It wasn't a shark. Most of you are nodding your head knowing that we were looking at a large cobia…which we didn’t catch. We did manage to catch some snapper and a couple kings.

From that day onward I was obsessed with fishing offshore. When dropping a baited hook into the depths you never knew what was going to hit or how hard it was going to pull. I started working at Marburger’s Sporting Goods around that time and probably got on everyone’s last nerve with all my questions regarding kings, ling and snapper. Looking back, I was likely on dad’s last nerve as well because every time seas were predicted to be “smooth to slightly choppy” I’d be chomping at the bit to get out there.

We didn’t have the luxury of multiple weather sites and accurate real-time conditions back then.  Friday afternoon I’d sit in the boat parked on the side of the house and tune the VHF to NOAA weather. I’d listen to the forecast played over and over until dad pulled into the driveway. I wanted to make the absolute best impression with my overly optimistic version of a favorable forecast. More often than not we’d head towards Galveston the next morning with plans to go offshore only to be greeted by conditions that kept us pinned to the jetties.

Now here I sit, some forty years later on the first official day of summer, flipping from site to site comparing forecasts and looking at the trends for the coming week. It doesn't look good at the moment but hope springs eternal. We are coming up on what is traditionally the most consistent stretch of calm conditions, July through September. Barring any tropical trouble, there should be plenty of days that allow us to venture out in boats more typically thought of for bay use.

Personally I’m pretty conservative when making my plans. For chasing tarpon I want it as flat as possible with seas of less than two feet at 6+ seconds. I can easily handle rougher water in my Dargel Kat, but it becomes more difficult to locate rolling fish and schools of bait. When the morning dawns mirror flat you can bet I’ll be cruising the beachfront on the hunt for those silver flashes. Sight-casting flies or lures to schools of feeding tarpon is about as exciting as it gets.  I’ve had seasoned anglers completely forget how to cast the first time a school erupts a few yards from the bow. I truly enjoy showing customers a sight they've never witnessed.

The problem with our coast is that even when you get those mirror flat mornings chances are good that by early afternoon the winds will be picking up. Once that wind chop gets going it becomes much more difficult to locate and stay on the schools of tarpon. At this point you’ve got a couple options, you can keep grinding and do more blind-casting using you electronics to locate suspended fish…or you can switch gears and look for other targets.

Unless the tarpon have really been going off I’ll usually opt for looking at alternatives. Weed lines, color changes, oil rigs, shrimp boats and bait balls are all good options. Basically, our nearshore waters are fairly featureless when it comes to bottom structure. There are a few wrecks, rocks and manmade reefs but overall it’s pretty flat and those structures don’t necessarily offer opportunity for the sight-casting situations I prefer.

While searching the beachfront for tarpon I’ll keep an eye on the offshore horizon looking for birds working or maybe an anchored shrimp boat making careful note of the locations. If the tarpon aren't cooperating and the crew gets restless for some action I can head towards these easily seen targets. An anchored shrimper culling their catch is the golden ticket. Anything and everything that eats a bait can be found chowing on the easy meal. Chunk a big fluffy fly and let it settle with the chum. That’s probably as close to a sure thing as there is in fishing.

Bait balls with birds hovering above are also a high-percentage play. Work the outer edges and watch for predators flashing through the bait. Try to match the fly or lure to the baitfish in shape and size. Generally, this situation will lead to catching kings, Spanish mackerel, bonita and sharks. It can get a little crazy around these bait balls with kings and sharks breaching the surface by several feet in pursuit of a meal.

While cruising around looking for birds or shrimpers I’m always on the lookout for a solid weed line along a current rip. If the weeds look right and have bait I’ll either idle the edge or drop the trolling motor to ease along more stealthily searching for predators. Cobia, tripletail and small dolphin (dorado) are the most common targets.

And if all else fails, there’s always the option of chumming. An anchored shrimper no longer culling, an oil rig or even some sort of known bottom structure are all good places to chum. The trick to chumming is to put enough out to draw some predators, yet not so much that you’re feeding them. You want them excited and hunting when you drop the fly or lure. Too much chum in the water can make them picky about accepting a fake.

I took a little break in the midst of typing this story to peek at the forecast and I think there’s a little window coming up in about five days. Tomorrow will find me at the workbench checking tackle and prepping for battle. It’s that time of year!