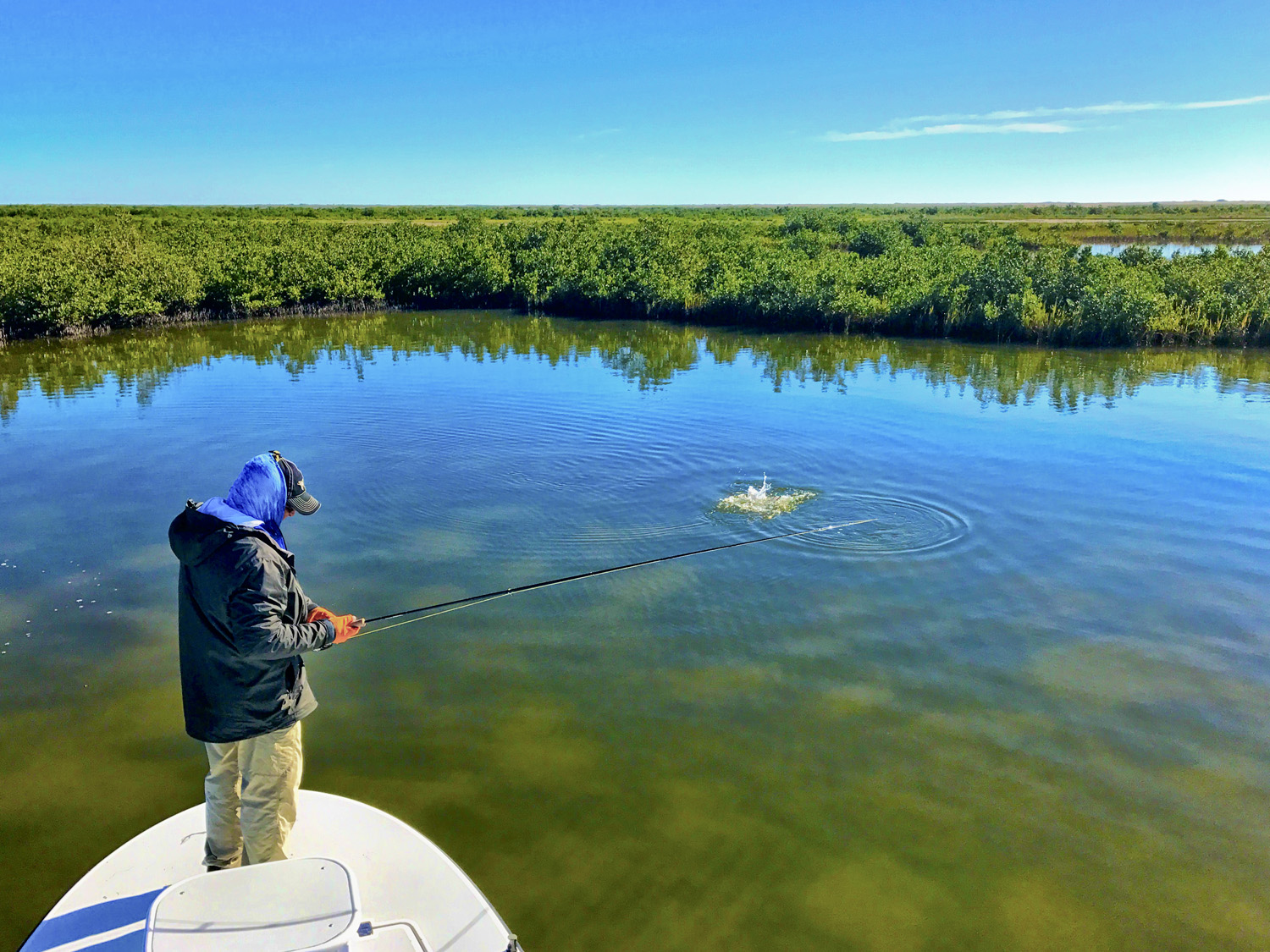 So, what do you think of the view from my office?

As I went out to the truck, the predawn air was dead still and just cool enough for a jacket. The rip-snorting front that hung around for a couple days had finally blown itself out. This one had been the full deal with a couple days of crazy strong southeast winds, some heavy thunderstorms, and then two days of tough north wind. As I drove down to the ramp I was up in the air as to which direction I’d head. Prior to the front I had been on some good numbers but the deck had been completely reshuffled.

Arriving at the dock, I found my customer already there and ready to roll. Mike is a great stick to have on the bow under any conditions and a real joy to share the boat with. He travels all over the world chasing a wide variety of species on the fly and fully understands that the fish don’t necessarily work on our schedule. We had talked it over the night before and I was straight up honest that we might have to do some hunting. His response was perfect, “I’m happy to just be on the water. Fish are a bonus.”

The open bay was mirror-slick as we ran wide open towards Matagorda Island. The front had dropped the tide a good bit, so my initial thought was that the reds might have pulled out of the marsh lakes to the outer shorelines. About an hour’s worth of poling the grass flats, bayou openings and a few scattered reefs proved me wrong. All that we found were two little wayward redfish that wanted nothing to do with us.

Prior to the front I had been on them in some of the larger lakes way back on the island. Maybe the water hadn’t dropped enough to pull them out. We picked up and made a move, but instead of running all the way into the back lake I shut down outside the entrance. The winding bayou leading back there is several hundred yards long with some little flats along the edges that might hold some fish if they had bailed on the lakes but not as far as the bay front.

My hunch was confirmed as soon as I got up on the platform. “There’s one at 2 o’clock moving away, two more at 11 o’clock coming to us. Take your pick.” Seeing fish was no problem, getting those suckers to eat proved a bit more challenging. As I said, he’s a great stick to have on the bow so hitting the target wasn’t an issue. I knew the reds were seeing his fly.

We caught a few but, given the number of shots, our batting average wasn’t all that great.Several reds rushed the fly only to slam on the brakes inches shy of eating. Others made half-hearted swipes, barely even rippling the water that barely covered their backs. Some even nonchalantly changed course to avoid the fly altogether. The few that ate were barely hooked with several shaking loose for long distance releases. So, we have clear water, dead calm and plenty of fish, but not much bait and no discernible feeding taking place. Time to switch it up a bit.

A fly of slightly lighter color and a size smaller was tied on. The next fish jumped all over it and I had to pull out the pliers to extricate the fly from his crushers. I won’t say every redfish ate with reckless abandon, but the pliers were needed on the regular and a pretty good day turned spectacular. Later on, the preferred flies had all been lost so we went with an even smaller bonefish style fly. There were no refusals. Size really does matter.

Throughout the day I never did observe any actual feeding activity. Most of the reds were just slowly cruising or even sitting nearly motionless. Toward the end of the day a school of spooked mullet ran through some flooded cord grass sending out a shower of tiny shrimp. Apparently, that’s what those reds had been keyed on and anything larger just wouldn’t do. My guess is the cooler water behind the front had the shrimp buried up and the reds were just hanging out waiting for them to show.

This is what I love about sight-fishing. Had we been blind casting and unable to observe the reactions of the fish to the fly we would have likely concluded there weren’t many fish in the area and relocated. Seeing fish provided the confidence to stick with them while a slight tweak in tactics led to success.