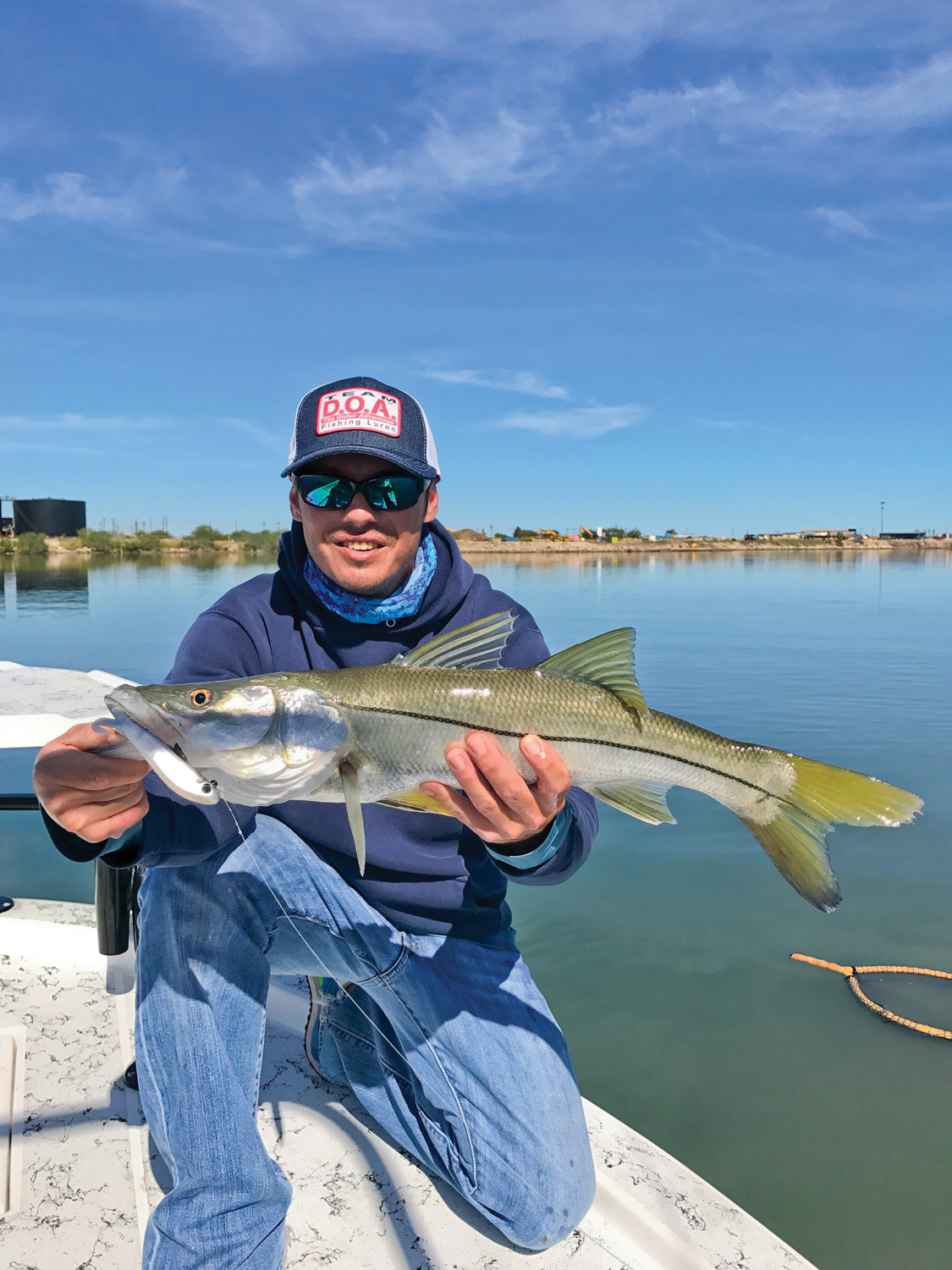 With Capt Lee Alvarez; we got so busy, I netted his while fighting mine, and then he dropped the net!

Back in November I got a call from Ed Zyak with DOA Lures asking if I’d be interested in spending a few days fishing Port Isabel in December. He and Mark Nichols, the owner of DOA, were getting a group together for the first Texas version of the DOA Writers Event. I have attended their annual event in Florida and it is always a good time. Ed gathers up guides in the area who are on pro-staff and pairs them with outdoors writers. No way I would miss this one in my own backyard.

At the time of the call we were in a run of unseasonably warm weather and as the date crept closer not much had changed. A few mild fronts separated by summer-like warm spells got me thinking about snook. My favorite thing about traveling to Florida is the abundant snook population. I’ve caught a few little ones in Texas as far north as the Freeport area and know of some that have been caught around Bolivar, but the vast majority of encounters occur around Port Isabel where there is an established population. My best in Florida is a thirty-six incher, but upping my personal best Texas snook from the standing thirteen-inch mark seemed like a really good possibility.

And then it snowed.

Snow and snook don’t typically go together. Snook live in far south Texas for a reason, they’re a semi-tropical species that doesn’t handle cold temperatures all that well. Day one of the gathering was a bust as far as fishing went. There was a unanimous lack of interest in venturing out onto the bay with 30+ mph winds, freezing temps and snow flurries. If you can’t actually be on the water, hanging out with a bunch of fisherman from around the country talking lures and fishing isn’t a terrible way to spend the day. Later in the evening the weather was clearing up and the wind was laying down. Plans were made to meet up at the dock in the morning and give it a shot.

Mark and I hopped aboard Capt. Ruby Delgado’s boat and headed north towards the Arroyo. It was a seriously cold ride. Along the way we passed dozens of cold-stunned sea turtles and miles of wind-churned dirty water. We spent the day hopping from one area to another looking for any sign of life on the cold flats. Ruby was trying everything she could to put us on some fish. We fished shallow, deep, soft bottom, hard bottom, grass, sand, clear water and off-color.It just wasn’t happening. We did manage to see a handful of lethargic reds and plucked a few trout from the edge of the ICW. Regardless of the catching, spending a day on the water with Mark was a lot of fun. The man is full of stories and having the chance to pick his brain about lure design and big trout made my day.

The next morning dawned clear, calm and a good bit warmer. I was paired with Capt. Lee Alvarez. As we headed south under the causeway, he was fully confident that we would pick up some trout at his first stop. When we eased into position adjacent to a long concrete bulkhead I knew exactly what he was up to. The sun was already shining onto the exposed concrete and likely radiating some warmth into the water. We tied on the new DOA Sna-Koil to give it a try.Mark is known for coming up with innovative lures and this 12-inch snake-eel soft plastic is certainly different. First cast up against the wall drew an instant thump and a nice trout was brought to the boat. For the next forty-five minutes nearly every cast that landed near the wall resulted in a keeper-size trout. I even caught one with the lure dangling over the side of the boat as I was releasing another. The Sna-Koil looks alive just sitting still.

I’m certain we could’ve sat there all day and caught trout until our arms fell off. Not to look a gift horse in the mouth, but I really wanted to go poke around for some snook. Lee was all over it.Chasing snook happens to be one of his favorite things to do. He did caution that they might not be as enthusiastic as the trout due to the cold, but I assured him I’d rather chance catching a snook or two than boating a bunch of school trout. My goal was to beat that personal best Texas snook.

It didn’t take long. Our second stop was a small drain that emptied out into the Brownsville Ship Channel. After a couple dozen casts the DOA paddletail was crushed by an acrobatic 22-inch snook. Lee could’ve called it a day right then and I would’ve been perfectly satisfied. I’m really glad he didn’t.

The wind was perfect for drifting down the shoreline of the channel at a nice slow pace. We were able to pound casts at all sorts of structure, picking up a small snook here and there. As we neared the end of an old bulkhead I spotted a cut back that just screamed snook. The cast was true and drew an immediate thump. I about fell off the bow when I set the hook into nothing.Dammit.

I dropped the rod tip and started to crank hard for a quick follow-up cast. About two turns in, the lure just stopped. You know that stop, the one when a good fish eats. A split second later a big snook was headshaking across the surface. She dove, I prayed. She jumped, I prayed some more. Eventually it all worked out and I was holding a Texas snook that taped more than thirty inches. Cool!

But we weren’t done. The next stop was another ditch with some dirty water draining into the clear water of the channel. The dirty water didn’t look all that promising until a snook blew a hole in it, followed by a shower of finger mullet. The fresh, murky stuff was only a few inches deep riding atop crystal-clear saltwater. Finger mullet were trying to hide in the murk and the snook were lurking beneath.

Lee hit the Power Pole at the edge of the dirty water and we proceeded to have a magical afternoon. Every time a fish blasted a mullet there would be a clear ring for a few seconds. A cast into that clear spot would get eaten damn near every time. At one point, Lee said, “Holy crap! Look down!” About three feet under the bow was a massive school of snook cruising shoulder-to-shoulder as far as you could see. Easily a hundred or more slot and over-slot fish.Amazing.

I honestly don’t know how many fish we pulled out of that spot, but we were doubled up multiple times and rarely went more than half a dozen casts without a snook for a period of a three hours. Forty snook and half a dozen reds would not be an exaggeration. We threw a variety of lures, but the most consistent were the C.A.L. 4-inch Shad Tails, 5.5-inch Jerk Baits, and the DOA Bait Buster in light colors. White, pearl and glow drew instant strikes while anything darker would be largely ignored.

Who would’ve ever thought that working a snow melt run-off would be a productive pattern for snook? Never say never!