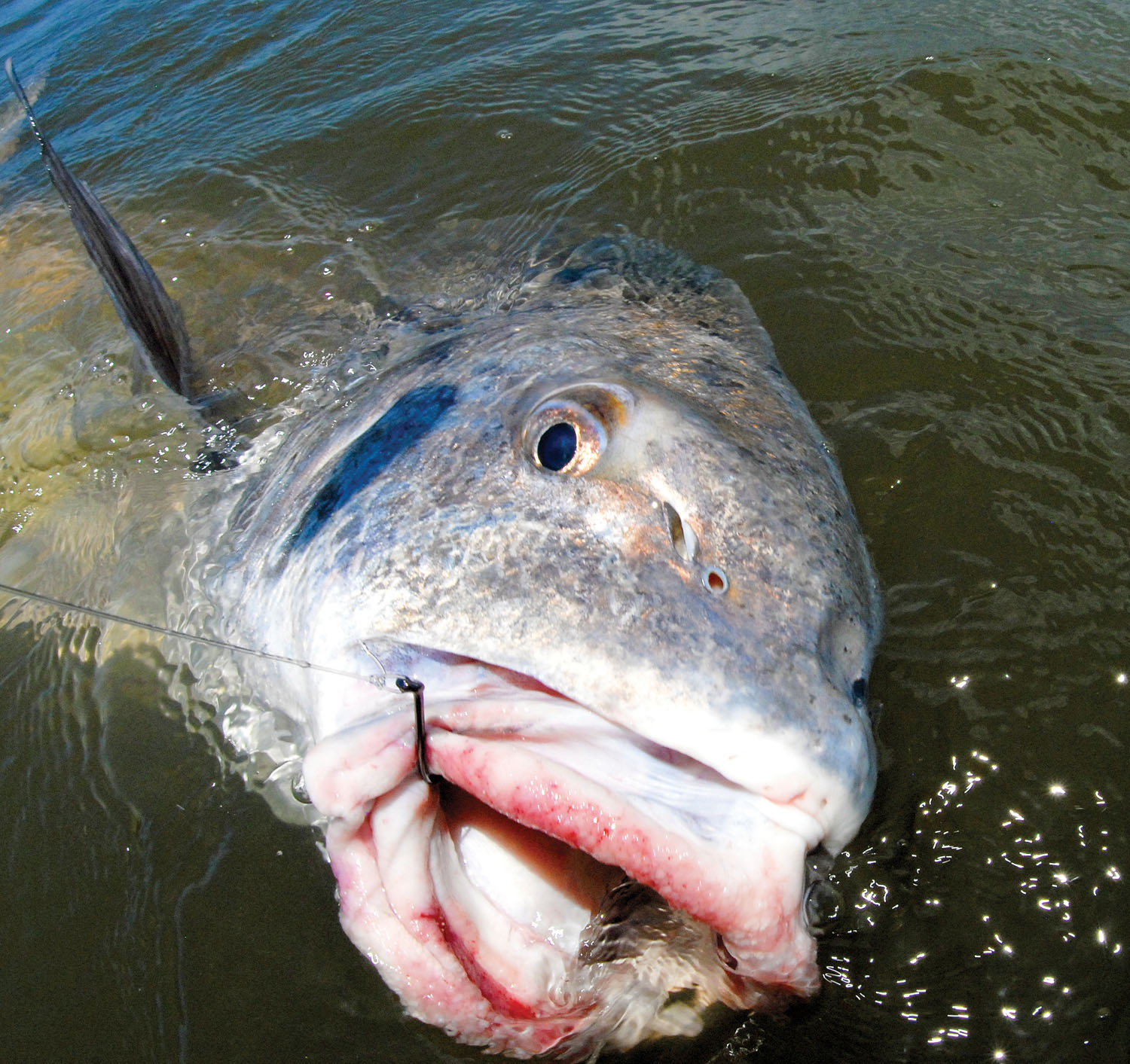 Big drum brought alongside, with circle hook pinned to a rubbery lip.

Texas’ population of big, black drum are now gathered for their annual spawning ritual. These brutes commonly grow to 50 pounds, and for many anglers who don’t venture offshore, this is the biggest fish they can reasonably expect to catch.

Big drum are a low-cost fish: The biggest expense may be scoring a dozen blue crabs for bait. No other saltwater species is out there of that size, that will bite only yards from dry land, except perhaps alligator gar. Keep in mind that, only one cast away from dry land, these spawning fish prefer depths of 15 or 20 feet. You can park a car and fish, or use a simple jonboat with a few sturdy rod-holders.

If the wind is blowing, no problemo: Anchor in deeper, saltwater bayous (such as Saluria in POC), the Texas City Dike, Seawolf Park in Galveston, or sheltered water around coastal jetties. Target a decent incoming tide, or at least moving water. Depth is important; I’ve never heard of big drum spawning in shallow water.

Use medium tackle with at least 25-pound line, with just enough lead weight to hold bottom in a current. A nice red circle hook works great, the bigger the hook the better, because these guys have a big mouth and greedy appetite. With a (preferably live) blue crab, first pop the shell off and toss it out there where you plan to fish—it makes good chum. Next, cut the crab carcass in half, right down the middle. Pin the hook through the crab’s paddle fin, which has a nice rubbery joint at the base. (See photo). Using this recipe, set out four rods, and you’re in business.

Where to find blue crabs? Bay water should certainly be warm enough by March, for crabs to be active. If you have a crab trap, let it soak overnight before checking it. Blue crabs can be difficult to buy in small coastal towns, but I suppose crabbers ship them to bigger cities for a better price. Asian food markets invariably carry these crabs, usually still alive. I pick out the biggest, meanest crabs in these stores, not the limp ones. Blue crabs will stay alive overnight in a cooler with a sealed bag of ice, though it’s best to shield them from cold plastic and water.

Haul a few spring breakers out in the boat to a known drum hotspot with a dozen or more blue crabs, and things can get interesting very quickly. Especially on the right tackle. We used to catch these fish with whatever offshore snapper tackle was available, but they’re far sportier on spin tackle.

Since I started using more blue crabs for bait during warmer months (targeting redfish), we’ve battled many big black drum, sometimes landing eight or so without moving the boat. It seems that during summer and fall, these big fish spread out and prowl fairly shallow water, usually feeding over oyster reefs and shell, rooting out young oysters and whatever crabs they can find. We’ve also caught them next to commercial docks in a dozen or more feet of water. If you want to get serious with a big fish in tight quarters, try that. Our 25-pound line couldn’t stop them, so we upgraded to heavier gear.

Two summers ago I was pleased to educate a few local shore fishermen on a small bridge over a bayou. They were tossing dead shrimp and catching small panfish. I told them I knew redfish were in the bayou, and since mullet was scarce that day, why not try a crab? One of the guys pulled out a single crab from his bucket. I showed them how to prep the crab, and pinned the guy’s J-hook through the paddle fin. He tossed it out and within two minutes, had a heavy strike. But missed the fish. I told him to wait a few seconds before setting the hook. With his last bait he tossed back out there and within seconds was hanging on to his rod, something huge was trying to take it away from him. There was much commotion, a flailing landing net too small, but eventually a big drum was landed. As I drove away there were high-fives and selfie pics with the ponderous fish.

Not sure if they released that fish or tossed it in their car trunk. These big spawner drum carry a slot size limit of 18 to 30 inches, with five fish allowed per day. However, one of those fish can be kept if it is longer than 52 inches. Presumably a drum of that size has spawned a number of times in the past. But it would be tougher than horse meat on the table, not worth keeping. Best let the big ones spawn again, to produce many “puppy” drum that are far tastier.