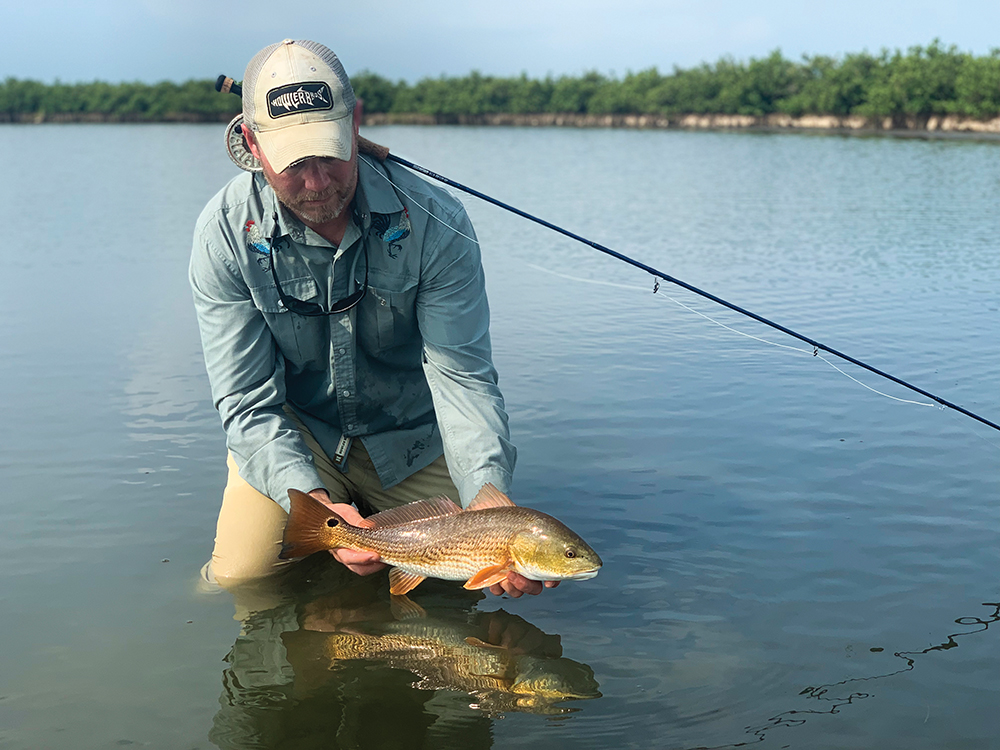 Sitting in my office this morning it hit me like a light shining through the window. We’re headed into fall, my favorite time of year. And it literally was light shining through my window. After this day the rising sun will line up with this window as it tracks further south on the horizon until it returns north next spring. But I’ll be elsewhere most mornings this time of year, either on the water or in the field.

When I took a break from my desk duties, I stepped outside; it was far from cool and crisp, but the heavy oppressive heat of late summer hadn’t cranked up just yet. Here lately I’d been breaking a sweat loading the boat in the predawn. I know we’ve still got several weeks of heat, but it felt as though the 100 degree days were finally fading in the rearview.

Then I heard the familiar buzz of a hummingbird as it checked out the flowers around the porch, one of the earliest signs of fall around here. Time to decorate the porch with hummingbird feeders full of sugar water to fuel them for their vacation in Mexico. In the next couple of weeks we’ll have more than a hundred hummers visiting our feeders on any given day.

A pair of doves flew over the yard and I shouldered my imaginary shotgun and swung on them.  Rolled ‘em both. Of course. Next week there will be actual gunpowder burned and I doubt I’ll roll that first double. Those shifty little doves will sharpen the skills for some feathered rocket action as teal invade the coast.

Why am I writing all this hunting stuff in a fishing magazine? Mostly because they are the signs of fall I look forward to each year.  Once the dawn shines through this window, the hummers show up and my calendar starts filling with season openers and…I know the fishing is about to get really good.

It also means the summer crowds will be gone and the flats will quieten down a bit. Between school, hunting, and football, a lot of folks simply won’t have time to hit the bays. But for some of us the draw of fall fishing puts a morning on the water above the other options. The water temps will start dropping making a wade much more refreshing than this bathwater-warm stuff we’ve been sloshing around in. The cooler water will awaken the flats and all that inhabit them.

I love watching the transition of seasons on the water as well as on my little piece of land. I may visit the indoors and this desk as necessary, but I live outdoors. If you are going to be successful at fishing, hunting, and wildlife photography you must commit to being an observer.  As sure as the movement of the clock on your wall, nature moves at a predictable pace. I know that when my fawns are losing their spots the reds will be cranking up their feed on migrating shrimp. The whitetail rut on my place will coincide with flounder starting to stack at the drains to feed prior to starting their movement towards the passes. The early arriving ducks tend to show up about the time the birds are working over schools of trout.

Not only is fishing this time of year more comfortable, it is more productive. I’m often asked when would be the best time to come fish the coast. My response is always if I could only pick one thirty-day period out of the year to fish the flats it would be October 15 through November 15. Generally speaking this is a time of great weather, not too hot and not too cold. The fronts are typically mild and blow themselves out somewhat quickly leaving clear skies and light winds in their wake.

The shrimp have grown to a point they are leaving the nursery grounds of the marshes. Reds, trout and flounder will all be taking advantage of this migration to fatten up for the leaner months of winter. And I’ll be taking advantage of their aggressive attitudes. There is a feeling of urgency about their feeding that is fun to watch from my poling platform. The slowly tailing fish of summer gather together into schools that march across the flats seeking concentrations of shrimp. In the heat of August it might take several precise casts to convince a lethargic red to eat your fly. In October it just needs to plop down within their sight radius to be inhaled. What’s not to like about that?

I’ve written and talked about “drain days” many times over the years. The first one will usually occur during this period. For those who are new to this term, a drain day is when a strong cold front blows in and drops the water levels significantly. The perfect wind direction varies depending on your location, but for the upper half of our coast a front with northwest winds at 15 mph or greater will do it. This wind literally blows the water out. Whereas our typical low tide might drop water levels six inches, a good norther might drop it two feet or more leaving many back lakes dry.

All of the inhabitants of those areas have no choice but to bail out. Every gamefish and everything they eat will be funneled out through the drains. They will all be concentrated into fairly tight quarters and a feed will commence. It can be some of the most insane action you will ever experience, but it is all about the timing. An hour or two in either direction can leave you staring at dead water. A couple years back I had a father and son out for a drain event that started just after daylight. For about six hours we sat on a marsh drain and flat wore the redfish out as school after school came through, crushing bait, sometimes trapping the bait against the side of the skiff. These guys from Utah had never even seen a redfish. By the end of their day they had lost count of fish landed. The dad said he had quit counting at forty for himself and his son was doing better than he was. It was an epic morning of fly fishing.

After I dropped the guys off to head to their pre-Thanksgiving gathering, I turned the skiff around and headed back to the marsh. I needed a fix of my own.  But I arrived to dead water. Nothing.  Not water movement. No bait. No reds. It had been about an hour and a half since we left them biting.

As I said above, timing is everything when fishing a drain day. I messed around on the flats outside the drain and found several schools, but they weren't eating. They were absolutely stuffed from their binge feast. I swear I think they were burping because there were little slicks popping up, but I could plainly see that these fish weren't feeding.

Whether you’re sitting in your bow blind, swinging on a crossing dove, or chasing hungry fish…enjoy. Enjoy the time spent outdoors with friends and family. Enjoy the solitude of a bow blind. And most of all enjoy this cooler weather.