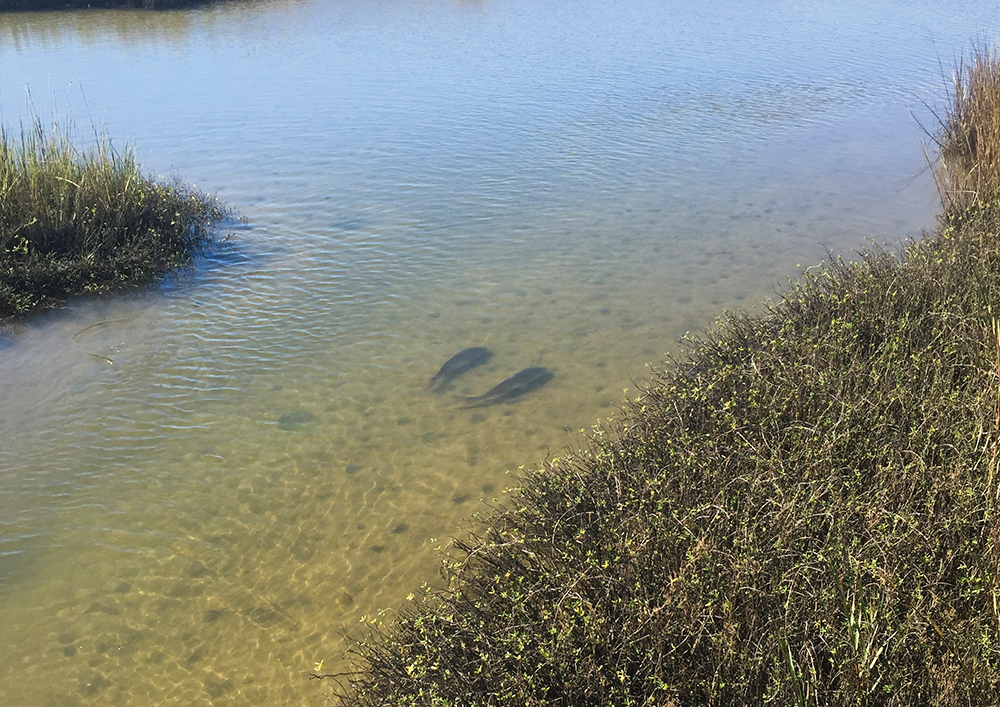 Give me a low tide in the marsh!

While co-hosting the Bite Me Saltwater Fishing Podcast I have come to realize just how confused many people are about these two subjects. We receive a wide range of questions via Facebook and email but some come up more often than others. I get it.

Any advice you get about saltwater fishing tends to start off with water movement, but figuring out the when and why water moves can be confusing. This will likely seem a rehash of Tides 101 for old salts but hopefully there are enough people out there who need this to justify the magazine space.

I’m often asked whether I like a high or low tide. Depends on what I’m targeting and time of year. Do I prefer incoming or outgoing? Again, it depends. There are no hard and fast rules but the need for some kind of water movement is as close as it gets. Generally speaking if the water is stale things aren’t going to go well.

Texas is huge. We have roughly 367 miles of coastline from Sabine to the Rio Grande and hundreds of thousands of surface acres of inland bays, marshes and tidal waterways. The Galveston Bay complex alone accounts for nearly 400,000 acres. Take a good look at a map and note how Texas bays are oriented – the long and gradual curve from east/west along the Upper Coast to the north/south orientation of the Lower Coast plays a huge role in water movement. No matter how many times I fish the Lower Laguna Madre I still can’t get used to where the sun comes up.

Why is the shape and orientation of our bays so important to water movement? In a word – wind. Wind plays a huge part in water movement. In many areas the wind is a greater influence than the actual tide schedule. While you’ve got that map out, take a look at the passes along our coast.  We are somewhat short on openings considering the length of our coastline and the amount of water that lies inland. With the recent closings of Rollover Pass and Cedar Bayou, I count fifteen openings. Of these I’d consider only eight or nine as major passes capable of allowing a significant amount of water movement.

It becomes readily apparent that many places within our bay systems have little or no communication with the Gulf of Mexico. This leads to the first bit of confusion many people have regarding the effect of tides on areas they plan to fish. The further away from one of these passes you travel, the less the tide predictions will matter. When I fish the jetties or a natural pass, the tide schedule is really important. The tides will generally occur as predicted, but can be thrown off a little by wind or a heavy flood. A strong wind blowing straight into the pass will slow an outgoing tide and accelerate an incoming.

This next piece of information is important no matter where you fish. Sustained southerly wind blowing through a pass for several days will elevate the overall water level in adjacent bays, sometimes a couple of feet. That’s when you see coastal flood warnings issued even though it hasn’t been raining. The incoming tide is pushing a greater volume of water than normal and the outgoing is partially blocked. Also of note, the first calm day following such a wind and tide event will result in an outgoing tide that runs longer and harder than predicted. As the wind relaxes, the dam breaks and all that excess water leaves.

The opposite occurs in winter when a strong norther blows through the region. I’ve written several times about “drain days” being my favorite time to fish the marshes. The exact wind direction required for a huge tide dump to occur varies according to the orientation of the bays and passes. This one requires on-the-water experience to figure out.

The further away from a pass you get the less moon-driven tide will affect you. It will also affect the timing of highs and lows. Compare the Galveston jetties to the upper end of Trinity Bay. Even though Trinity’s tide originates at Galveston it is far different in both timing and strength.

San Antonio Bay, Baffin, and parts of the Laguna Madre are so far removed from a pass that their tide prediction are almost a flat line. Highs and lows are measured in a few inches. Water movement in these places is largely dependent on the wind. While much of the coast welcomes a calm day, you’ll often hear guys from these areas praying for wind. Dead calm conditions in these bays can lead to really tough fishing.

When you combine solunar charts, tide schedules, and wind predictions it’s easy to see why there is so much confusion over choosing optimum fishing days. Waiting for all these to align favorably could mean you’ll rarely venture out. My advice is to go when you can and learn to deal with the conditions you are given. Experience is still the best teacher, even with a world of information at our fingertips.

When I first started fishing Louisiana I was confused how a cove I liked to fish would go from perfectly clear to nasty in a matter of a few hours with no change in the wind, and adjacent areas remained clear. I finally figured it out when I decided to stay in that cove all day. The morning low tide had clear water and easy pickings for sightcasting bull reds. As the tide came in I noticed a plume of dirty water emanating from two very small bayous that seemingly led into nothing but a big marsh. Where I had assumed water would be flowing into these areas on the incoming tide, I found it was actually coming out of the bayous. I poled into the larger of the two and found that it did indeed lead into an expanse of marsh with a soft, silty bottom. And then it led farther back to the main ship channel. Aha! A strong incoming tide was pushing from the channel, kicking up marsh silt and delivering it to my cove.

Get out there and figure it out. For me, that’s the best part of the journey from newbie to old salt.