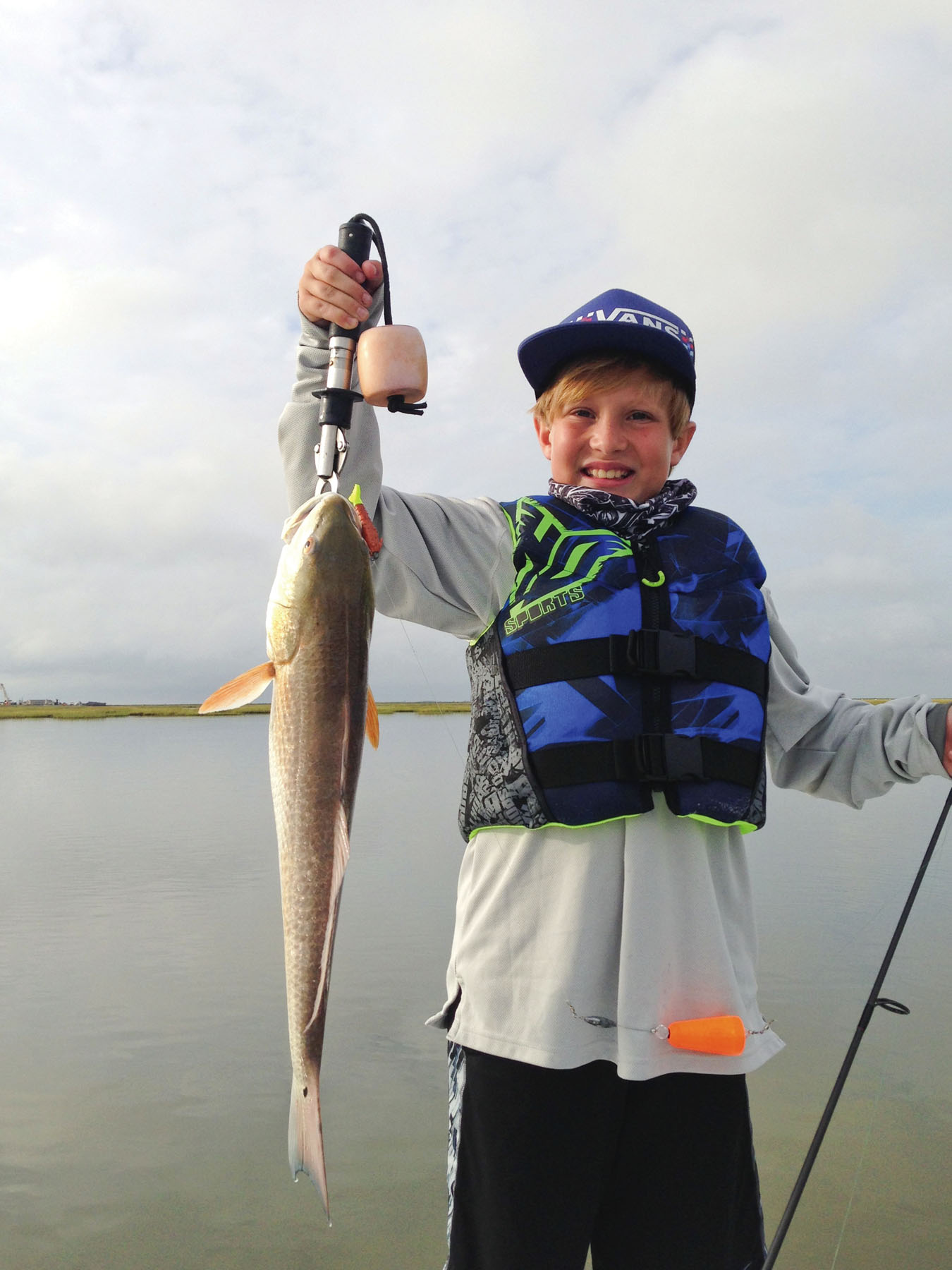 The next generation of anglers should be reason enough to find solutions to user conflict on the water.
I'm a little past deadline, according to Mr. EJ, but with good reason. I've been struggling over how to write this, such that it might create the most positive response. I've messed around with the words in my head, and then as deadline approached each month I'd take a path of less resistance.

We have a real and growing problem along our coast. A few months back I wrote an article after experiencing some particularly frustrating days on the water, highlighting the general lack of courtesy and respect for others and the resource I had been observing. It apparently struck a chord as I've been writing for this magazine every month for ten years and nothing previously written ever drew as many emails or phone calls. So I'm thinking the problem is real and not just one in my mind.

Enter Chuck Naiser, a much respected veteran guide and waterman from Rockport. Chuck has been in this game a long time and helped pioneer saltwater fly-fishing in Texas. He is one of my heroes and I have tried to model my guiding style after his. Chuck contacted me with an idea to gather some people from different disciplines of coastal fishing to just talk. No finger pointing, no puffed chests, no arguingjust talk. Talk about what bothers each group; how the other groups go about their day. It wasn't going to be about seagrass or regulations. He just wanted everyone to hear the other guy's story and possibly gain a better understanding of each other.

Eventually Chuck assembled a group of guides and non-guides who fish from a variety of crafts, in all different manners. There were kayakers, air-boaters, waders, bay-boaters and skiff polers. Bait fishermen, lure chunkers, and fly guys. An eclectic crowd for sure and Chuck asked me to come to the first meeting as an observer and report on what I saw, hoping to get the ball rolling in a positive direction.

The basic issue as I've previously pointed out is an overall lack of courtesy and respect for others who use the water differently than the next guyreal or otherwise. If you have never fished from a kayak you may not fully understand what you are doing that irritates them. Same goes for poling skiffs, waders, drift fishermen, etc. If you don't know the methods employed by each group then the chances are good you could step on someone's toes and never realize that your actions ruined their chances.

As an example, most times I'll pull into a shoreline at least a couple hundred yards from the area I intend to target and then ease in, poling quietly. Quite often another boat will pull in, cutting me off, as a swarm of waders pile into the water. I'd like to think they just didn't understand what I was trying to do and meant no harm. It still is irritating though and something that could possibly be avoided if those waders better understood how someone in a poling skiff operates. I honestly believe that most people on the water have no intention of bothering others, they just don't know how other folks fish.

Then there are those who don't get it and don't seem to care. One in particular stands out because we fish in the same manner in the same areas. I was poling along with a fly-fishing customer, no other boats in sight, middle of the week and miles of open shoreline. Along came another skiff on a beeline and angles in about 100 yards downwind and down-sun, obviously the direction I was heading. I know this cat and I'm instantly hot. But not as hot as when my phone buzzed with a text, "Sorry man, I didn't realize that was you until I was already in." What the hell difference would it make who he pulled in on?

Sorry, got a little carried away for a moment–back to Chuck's meeting. Everything went off without a hitch. Chuck kept things orderly and everybody had their say. It was unanimous that the fishing areas most negatively impacted by poor user etiquette are flats, shallow shorelines, marshes and back lakes. Most of what I heard revolved around a few simple things that if adhered to, would cut out a large majority of the irritants.

Don't shortcut flats. Simple enough. Use channels and deeper water. Just because you have no intentions of fishing that area doesn't mean others won't. Go around.

Don't needlessly traverse fishing grounds. You see it every day, somebody running back and forth through areas that are well-known favorites. Even though a place that is "too common" or "too crowded" for you does not make it right to run through it. Most places along the coast have a way around them. Even though it might mean going a few hundred yards or maybe even a mile out of your way, do it.

Slow down and check out the area before entering. Look at who is there, how they are fishing and where they might be headed. Are they drifting downwind? Which way are they poling? Are those waders working shallower or deeper? It doesn't take but a few moments to figure out most of their game plans. And if the area just seems too crowded, go elsewhere instead of trying to shoehorn in between others.

Number one by farstop the "burning." I know it is an effective way of locating fish concentrations for a tournament or whatever, but it is about as big an "I, me, mine" move as you can make. Screwing up miles of water for everyone else so that you can "locate" fish that you might want to come back and fish later. Give us all a break (fish as well as fishermen) and just stop it already.

One well-known young guide in attendance made a statement that stuck with me and summed things up pretty well. "As guides, we set the bar and educate our customers on what is right and proper on the water. I'd rather zero than harm my reputation by being discourteous to others."

Another noted, "The bad behavior has been done so much it has gotten to the point it is accepted, the old "everybody's doing it" mentality.

My takeaway from all of this is that most everyone in attendance wants things to be better. They want to enjoy days on the water without getting irritated. It's supposed to be fun and relaxing. TPWD does as much as they can with what they have, but they don't have the resources nor ability to make people act respectful towards others on the water. We don't need more laws and regulation, we need more education. People on the water such as guides and more experienced fishermen who take those newbies out need to lead by example. Make it a point to not only take the right action, but explain to those you have with you what you are doing and why. Explain to them that you were going to fish that area, but those waders are headed that way so you are going to Plan B. Explain to them that the ride might be a little rougher for a few minutes because you need to swing out further off the bank to avoid those kayakers. I'm sure you do these things all the time, take the time to tell your passengers why.

Jay Watkins couldn't make the meeting, but he passed on his thoughts through Chuck regarding this group and I couldn't agree more. "We need to reach out to those who believe as we do, that we can all act more responsibly. From that we can build a base. Coming out fighting hard against something is futile. We need to stand for something that is positive."

I am willing to try, are you?