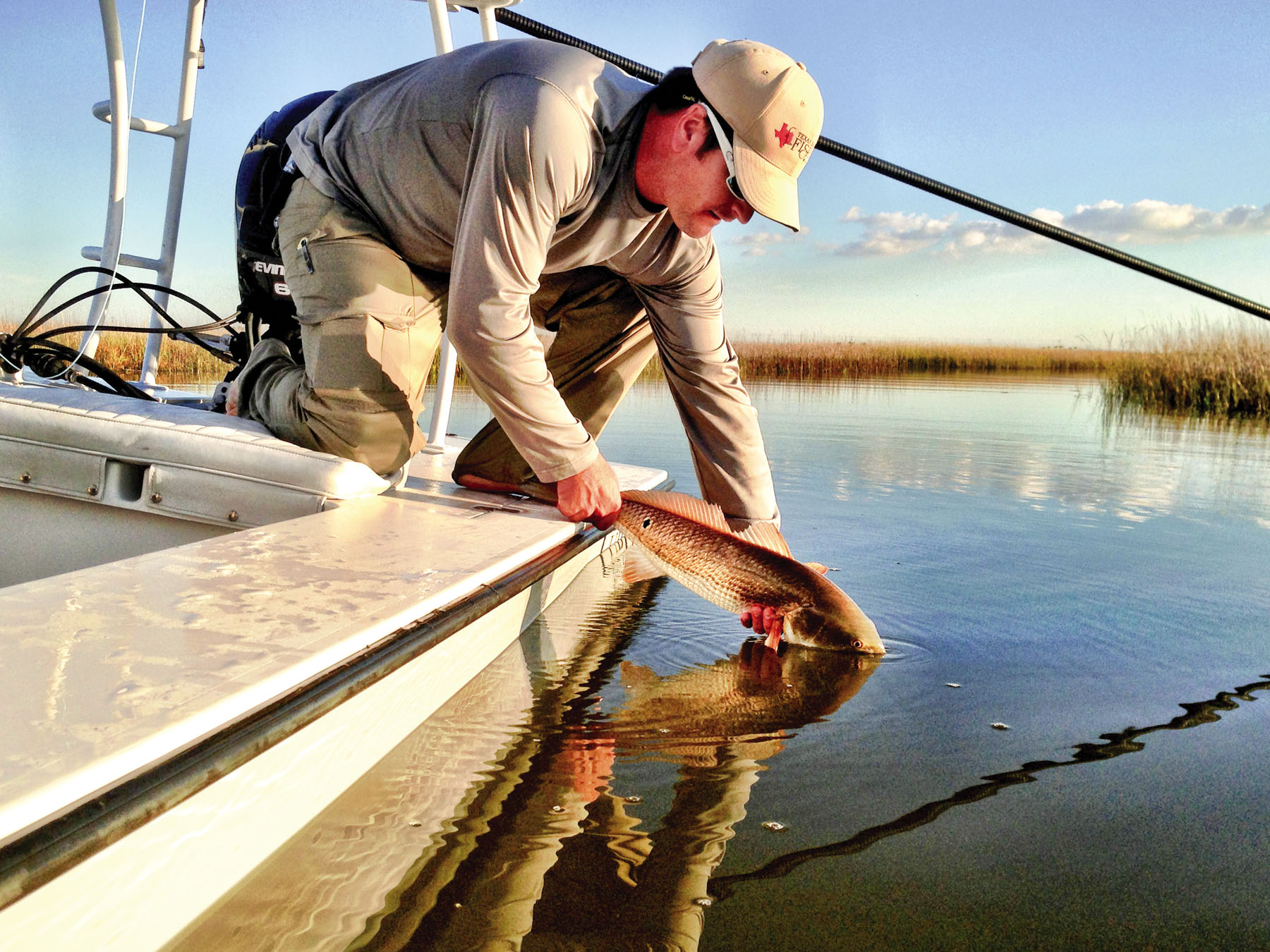 “I have never cared about setting world records, or filling my boat with fish, or, for that matter, even catching fish. I go for the experience of spending six hours in the arms of the ocean, never thinking of a single thing except chasing fish.”  -Jimmy Buffet

Couldn’t have said it any better myself.

What I love about the shallow water sightcasting game is the hunt.  It’s about patrolling the marsh from high atop my poling platform and trying to figure out what the redfish are doing on this particular day at this moment.  It’s about putting the pieces of the puzzle together; the season, the wind, the tide, the time of day and their food source.  It’s about soaking it all in and coming up with answers.

It is about taking a moment to size up the fish’s attitude.  It is about deciding whether he’s aggressively attacking anything that moves, looking for a quick snack or just chilling.  It is about planning the approach and setting up for the shot without alerting the target.  It is about executing the perfect cast and watching as the red is fooled into eating the fake.

I fully understand that my way isn’t the only way to enjoy time on the water, but it is where I have arrived after many years of fishing.  I was once the kid trying to catch every fish in the bay.  Later I was the young man trying to string the biggest to feed my growing ego and prove I belonged among the salts I admired.  Then along came the tournament phase where I had to judge my skills against the rest of the crowd.  I wouldn’t change anything about the course of that journey.  I’ve had fun with every step and I certainly don’t begrudge anyone following their own path, so long as they do so ethically and within the legal boundaries.

Now as I enter the month leading to a half century on this spinning rock I no longer have the desire to compare myself to others.  I no longer feel the need to catch the most or the biggest.  More and more often I’m finding that just capturing a good photo of a feeding redfish is reward enough.  I only want to fully enjoy what I do and make sure my future grandkids have the opportunities to experience the cool places and sights I’ve seen.  I want them to see a shower of baby shrimp shooting out of the water as a herd of reds plows down a shoreline.  I want them to watch as a solitary redfish roots a crab out of the mud.  I want them to grin as a reddish egret dances like a fool through the shallows with it’s wings spread while chasing tiny baitfish in circles.  Most of all I want them to realize that getting out there and seeing these things for themselves instead of looking it up on the internet is possible...and pretty dang cool.

Earlier this year I wrote an article about a trip we took to fish the marshes of Louisiana last January.  The story detailed a four day sightcasting adventure like none I’d ever experienced.  Over there, the big mature bull reds move into the shallow marshes throughout the winter.  It is not uncommon to see reds well over thirty pounds in water so shallow it barely covers their backs.  After writing that story many of my regular customers started asking if I would consider guiding them to some of these beasts.

I like to keep my customers happy, so I’ve decided to give it a go.  I have rented a house in Grand Isle for the months of January and February.  Trips will be for one or two anglers aboard my poling skiff using fly or light tackle.  If you’re interested please shoot me an email and we’ll discuss the details.