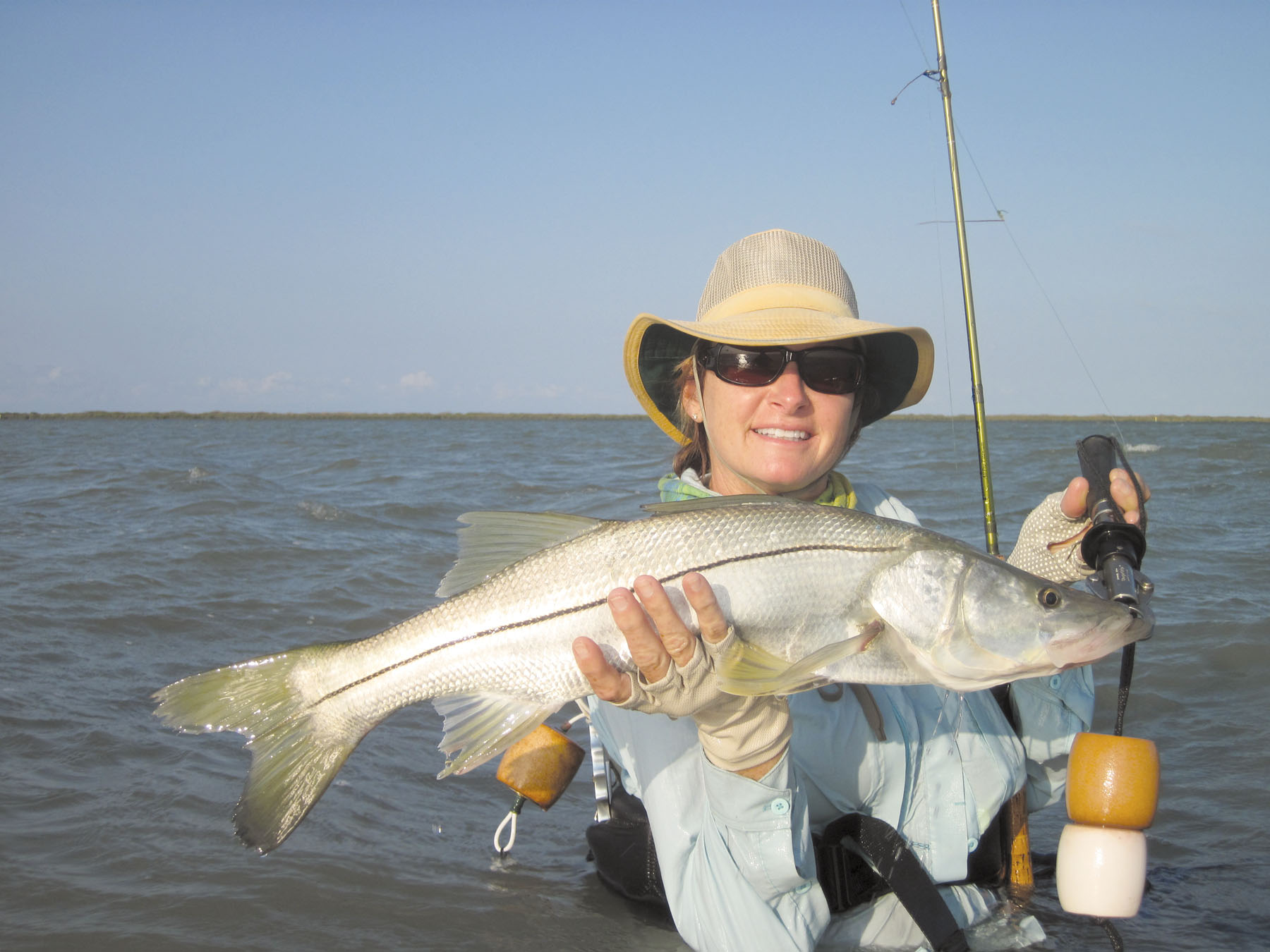 In the mind of your average Texas angler, the mention of angling for trophy snook will almost invariably conjure images of exotic destinations and neo-tropic waters. Rightfully so, snook thrive in warm water - not to mention reaching outsized proportions requires a long and happy life in rich habitat - a requirement that is not-so-common on coastlines where icy blasts can drive shallow seawater to near freezing whenever Old Man Winter takes the notion. Even in Florida's Everglades National Park wintery blasts will occasionally carve a deep notch in snook populations.

Yet - way down at the southernmost tip of our coast - we have a population of common snook that not only clings to life, but over the past decade seems to thrive.

The Lower Laguna Madre is blessed with a variety of habitat that snook can utilize year round. The deep waters of Brazos Santiago Pass and the Brownsville Ship Channel offer snook and other species safe haven during even the worst of winter freezes while the nutrient-rich Laguna itself, especially tiny South Bay, provides a great summer home.

We made our fourth annual summer trek to Port Isabel for a snook fix back in early June. The dates had been set for nearly a year and anticipation ran high in the days proceeding as our dear friend and fishing guide, Capt. Ernest Cisneros, emailed grip-and-grin shots of clients posing with outstanding specimens. We were pumped.

We pick our dates very carefully to coincide with the new moon, hopeful of day-long feeds and lots of opportunity. Each year we have succeeded in beating our previous best catches and, naturally, we all had visions of eleven and twelve pounders. The record snook in all Ernest's guiding is a seventeen pounder several years ago for Richie Hominga that taped an honest thirty-nine and a half. Maybe not enough to make headlines in Everglade City, but certainly enough to make this Seadrifter's blood run hot.

So with nervous anticipation, dressed in full wade fishing garb ready to step off the boat, reels filled with brand new braid, 40lb flourocarbon leaders already tied, wade boxes bulging with single-hooked topwaters and soft plastics (Ernest's recommendations) we boarded his Shallow Sport at 0500 to begin our great adventure. Munching breakfast tacos and sipping coffee to strains of Red Hot Chili Peppers via Ernest's XM (very inspirational for fishing), we idled slowly out of the harbor.

Setting the Power Pole, Ernest gave us the rundown on the spot we were about to test. The instruction included his usual snook can be stubborn speech that includes admonition to fish slowly and thoroughly, punctuated with if the blowup sounds like a snook, throw to the same spot at least ten more times. With their elongated snout and large mouth snook make a distinctive racket when they attack a surface lure.

Off into the still-dark morning, trudging slowly through ankle-deep goo in water that was barely at your knee one step and belly-deep the next, we launched tentative casts into the inky abyss praying to avoid backlashes. As Ernest predicted, we were fishing an area filled with mullet and exploding with occasional bursts of shad. In the distance all around we could hear the sounds of baitfish becoming breakfast.

There is nothing like a blowup in the dark (I don't care who you are), and the unmistakable pop of the six pounder inhaling my Skitter Walk was like a stick of dynamite. None of us mistook it for anything but what it was. Being dark and all, the fish pulling drag and jumping like crazy, I about wet myself believing it could be at least a ten. The wetting wouldn't have mattered, I was already wet.

Wading a few yards to my right Joe connected with one a bit heavier before I could apply the Boga Grip to mine. Pam was shrieking about her sixth blowup on as many casts and Norma was in a tug-of-war with a brute of a redfish. Pam's next cast produced a sleek five pound trout while Joe and I took turns with the waterproof camera. Norma was still hung up. I couldn't see Ernest's face but he had to be grinning. Such is snook fishing in the Lower Laguna Madre.

The key to all this was Ernest's sixth sense. The man must have been a snook in a former life is all I can figure. There we were in an improbable dead-end gut, literally treading mud while barely inching forward (stopping your feet will get you hopelessly stuck), catching quality fish after fish. Snook count at that spot was four, trout two, and Norma's bulldozer.

The next spot afforded plenty of daylight so the blindfolds were off. Now we see the bait and the essential current that snook love to feed in. Drifting in and dropping the Power Pole our jaws dropped collectively as a solid snook rolled less than fifty yards ahead. I teased Ernest by telling him even I could have picked this one. Floating grass cancelled the topwater opportunity, even with single hooks, but Norma's plumkin Trout Killer raked up a feisty four pound snook before another beastly red put her in time-out. Pam snagged a four pound snook that could have applied for a pilot's license it spent so much time above the water. Joe and I found a honey-hole of three pound trout.

Ernest says that over the years he has found daybreak to be the undisputed best time to catch big snook. He follows that quickly by saying the noon hour should never be overlooked, though, especially when the moon-over major coincides with the sun being directly overhead, (as it is during new moon). And then he stresses current. Too many anglers give up in the middle of the day, he says, but the beginning of a strong incoming current can really turn them on.

Again I say he must have been a snook. Delaying lunch to cash in on the tide - each of us hooked and lost at least one trophy snook (several ballistic tail-walkers), while landing a couple each in the four-five class.

Ernest has taught us his lure preferences. White, white with chartreuse, and woodpecker are his favorite plug colors (evidently snook dig white). Super Spook Jr. and Skitter Walks are his most trusted surface lures, single-hooked for added strength and to avoid floating grass. Kelley Wiggler Ball Tail Shads on 1/8 ounce jigs are his preferred plastics.

Flourocarbon leaders of at least 30lb test are a must as snook have sandpaper lips that can shred a leader in record time. Leaders of three feet and longer are recommended as snook have a habit of rolling. A short leader wrapped around a big snook will put light monofilament and thin braided line in contact with razor-sharp gill covers during the struggle and it more than likely will not hold.

Even though TPWD allows the harvest of one snook per day in a 24-28 inch slot, Ernest is all about catch and release for this species. This is made clear during booking; no snook will be retained on his charters. I grew up fishing here and the last nine years the snook population has grown so that I can target them steadily on my charters. I feel the snook deserve a chance, maybe some day well have more.

Perhaps the greatest thrill of fishing for snook, at least for me, is their stubbornness and unpredictability. No expert by any means, I am constantly amazed how they seem to bite out of nowhere. How they can blowup on your first cast and then refuse twenty, only to crash the last one made in desperation just blows my mind. How can you ever be sure it is safe to give up?

This is where hiring a knowledgeable guide comes into the picture. And without a doubt, a guide that targets them day after day over many years is worth his weight in gold to an angler on a tight time budget.

For all our three-day effort, even with Ernest's insistence to fish split days going out morning and evening, this was not our trip to claim a personal best. We each landed several solid snook every day, we hooked some genuine beauties on tops and also on tails, but the hooks never held. The snook gods wouldnt allow it. But that's okay; all any guide can guarantee is to put you among the species you're chasing. We're already booked for next year and we might get a chance to slip back down there in August or early September.