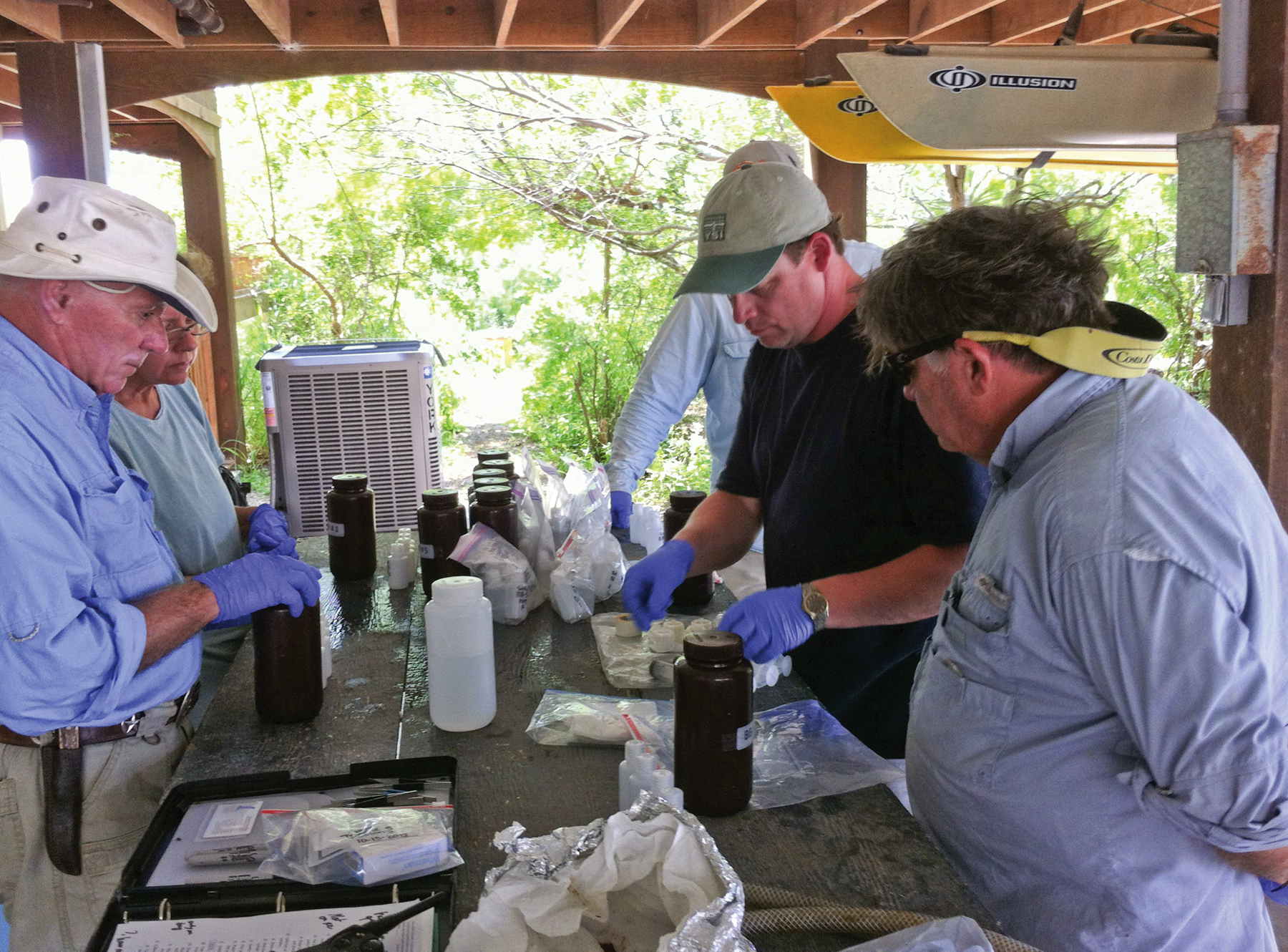 Volunteers collecting and processing samples as part of Baffin Bay water quality study.
By all accounts, Baffin Bay, located 50 miles south of Corpus Christi, is the jewel of the Texas coast. What has made Baffin Bay so special and attractive to both recreational and commercial fishing interests is its amazing ability to grow world-class spotted seatrout along with a black drum fishery that is second to none. Baffin Bay along with the Upper Laguna Madre, are the most productive bays in Texas when it comes to finfish production. In recent years however, concerns about changes in this once pristine ecosystem have been raised by both local and regional interests who have a vested interest in the future of this remarkable bay system.

Most everyone who is familiar with Baffin Bay and the adjoining Laguna Madre are acutely aware of the persistent brown tide outbreaks that have occurred since the early 1990s. During these outbreaks, the water often turns a brownish tea color which makes fishing difficult, particularly for lure fishermen, due to very low visibility [Figure 1]. From an ecological standpoint, brown tide blooms have led to sea grass die off in parts of these systems, and there is some evidence that the brown tide organism, which is at the base of the food web, may not be nutritionally adequate for consumers. Aside from brown tide, other concerns about the health of Baffin Bay include large fish kills that occurred in 2007 and 2010, a perceived decline in the black drum, blue crab and shrimp commercial fisheries, and anecdotal evidence of die-off of the dominant bottom-dwelling suspension feeder in the system, the dwarf surf clam Mulinia. In 2012, a large percentage of adult black drum that were commercially caught had to be discarded due to flesh with a "jelly-like" consistency. It has since been determined that this was likely due to starvation of the black drum. Coincidentally, the Mulinia are a primary food source for the drum. Several long time Baffin Bay users including commercial fishermen, recreational fishermen and fishing guides have commented that these symptoms appear to be unprecedented for Baffin Bay and have been increasing in frequency and intensity in recent years.

At about the same time as the "jelly" drum episode in 2012, a report was published that synthesized water quality data from the Coastal Bend region. The report indicated that over the past 35-40 years, the nutrients (Nitrogen, Phosphorus) that support algal growth have increased by >50%. A subsequent reanalysis of TCEQ data shows that during the same timeframe, chlorophyll (an indicator of algal biomass) has increased by nearly 3-fold and has exceeded TCEQ limits in every year but two since the early 1990s, in some years by as much as 2-7 fold [Figure 3]. These findings suggest that Baffin Bay is now undergoing a process called eutrophication, which is an all too common problem facing many coastal water bodies in the U.S. and worldwide. Eutrophication is basically the enrichment of a system with nutrients and algae, and is largely caused by man's activity in watersheds. In fact, the symptoms of declining ecological health in Baffin Bay are classic indicators of eutrophication. While several studies have shown that a certain level of nutrients can have a positive "fertilization" effect on the entire food web, high levels can drive a water body past a tipping point where harm to the ecosystem and fisheries becomes a real possibility.

In response to the citizen concerns and the clearly changing water quality conditions, a rigorous water quality monitoring program, staffed by citizen scientists and led by Texas A&M University-Corpus Christi researchers, was established in Baffin Bay in early 2013 [Figure 4]. The program relies on a dedicated group of volunteers, representing recreational fishermen, business and property owners and other interested parties with close ties to Baffin Bay. With an initial funding award from Kleberg County, the CCA, SEA and Coastal Bend Bays & Estuaries Program (CBBEP), this program set out to address a broader scope of water quality issues in Baffin Bay that cannot be addressed by more limited routine sampling efforts. One such goal is to determine when and where symptoms of water quality degradation are most pronounced in Baffin Bay. During the first year of this study, it was found that chlorophyll levels exceeded state criteria throughout the entire bay system for 8 months in 2013, and low bottom water dissolved oxygen conditions were routinely observed during summer-fall. Thanks to a recent funding pledge by the Celanese Corporation, the study group will be able to continue its work for an additional three years to better understand how the drought-rainfall cycle affects water quality in the system. Additionally, funding from the NOAA Coastal Management Program will allow the group to conduct experiments in order to determine whether it is the increasing nitrogen and/or phosphorus levels that are contributing to elevated algal growth in the system.

Aside from the water quality focused-studies, scientists from Texas A&M University-Corpus Christi have also begun a study of black drum movements in Baffin Bay. This group is working in tandem with the water quality researchers to determine if/how water quality affects habitat availability for the drum. The same group is also conducting surveys of Mulinia populations, which have not been done for over a decade in the system. The black drum and Mulinia research will be intricately linked with findings from the water quality study to better understand how the ecosystem as a whole is affected by changing water quality conditions.

In the near future, it is certainly conceivable, if not likely, that the Baffin Bay watershed will require the implementation of strategies to reduce nutrient inputs to the bay. Reducing nutrient inputs will presumably reduce the frequency/intensity of algal blooms, though studies in other systems have shown that it can take many years or even decades for a system to "recover" from eutrophication. Unfortunately the "recovered" system often does not look like it did prior to being affected by eutrophication because other important factors have changed in it as well. In Baffin Bay for example, at the same time as nutrient and algae levels have increased (since at least the early 1970s), water temperatures have increased by >2 degrees Celsius (>4 degrees Fahrenheit). Nonetheless, lessening the effects of algal blooms in Baffin Bay is likely to go a long way towards increasing the resilience of this system to other stressors such as the temperature increase.

Scott Murray, a long time coastal conservationist who serves as Co-Chairman of the Baffin Bay Study Group aptly states, " I think most of us, who have spent a lifetime on the lower coast would agree that Baffin is in transition and there is no doubt that it has significant water quality issues that must be addressed. It is this generation of fishermen along with other coastal stakeholders who are the stewards and trustees of Baffin Bay. I'm confident that we can leave this system better than we found it for our children and grandchildren. It's my sincere belief that these important and timely studies will serve as a turning point for much better things to come for Baffin Bay" [Figure 5].

2. All of the water quality problems in Baffin Bay are caused by drought. It is true that the first (documented) brown tide outbreak in 1990 occurred during a major drought, and there are studies that suggest the food web in Baffin Bay may be affected by drought and the hypersaline conditions that accompany it. Nonetheless, there is not a well-established linkage between drought and the long-term, continual increase in nutrient and algae levels in the system. Research conducted by the Baffin Bay volunteer water quality study should provide a much better understanding of the relationship between water quality and drought-rainfall cycles in the system.

3. The water quality and algal bloom problems are a part of natural cycles in the system. There have been several attempts to look at past cycles of algal bloom activity in Baffin Bay by collecting sediment cores and looking for algal indicators. Unfortunately these studies have not gone through the rigor of the scientific peer review process, and given the difficulty in interpreting sediment indicators of algae, little can be said of past algal activity in the system until the studies are thoroughly reviewed by experts. The clearest indicators of change in Baffin Bay are the trends of increasing chlorophyll and nutrient levels noted since at least the 1970s.

How to get involved: