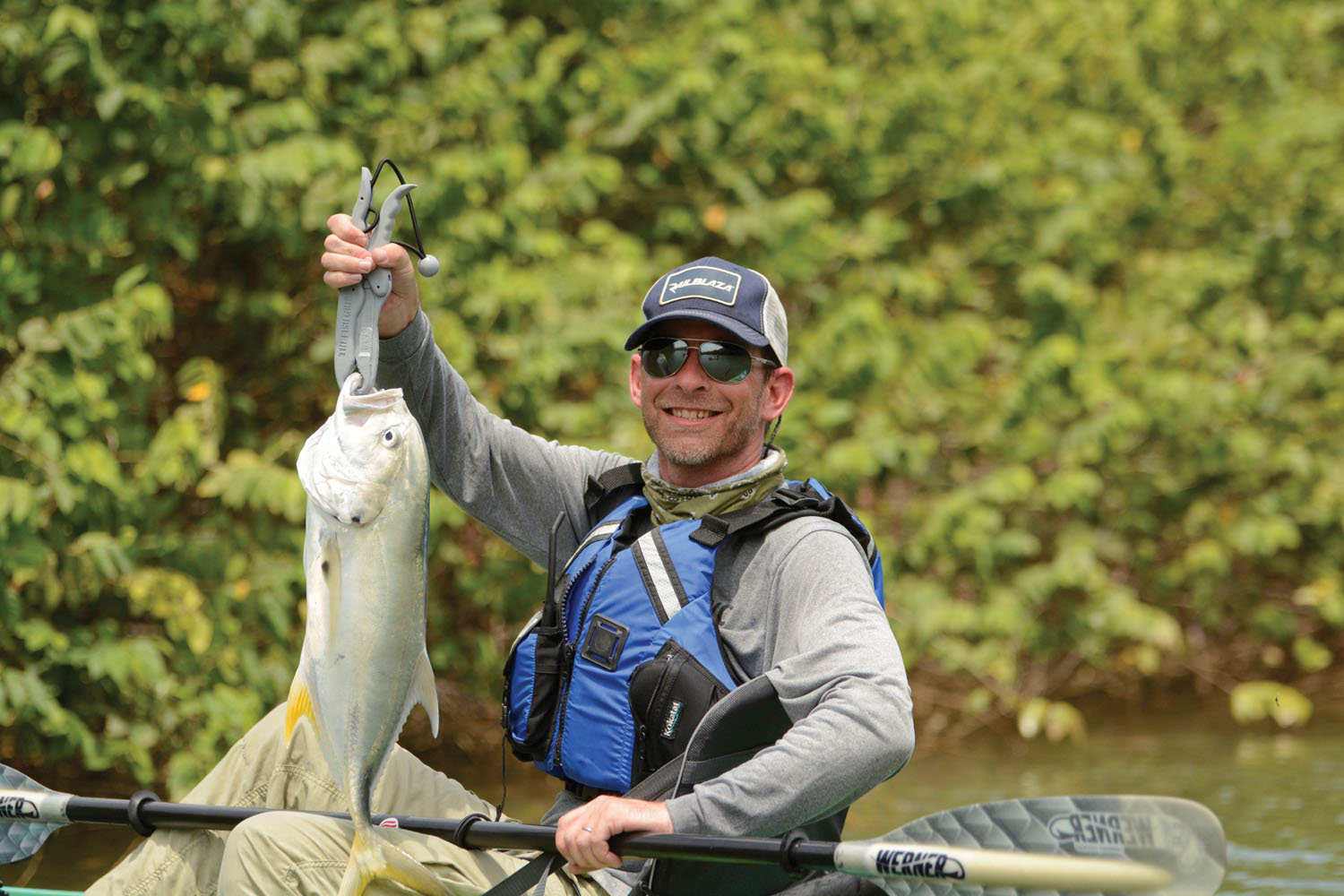 Jeff with a feisty jack.

Over the years I've come to accept that not all fishing trips will turn out as planned. Having a Plan B and going with the flow can divert frustration and salvage a trip. You just need to be prepared and accept that Mother Nature doesn't care one flip about your script.

A few weeks back I got a call from my buddy Jeff Herman asking if I'd like to go to Belize for a quick fishing trip out of the Belize River LodgeWell Duh!

I love Belize and I've always wanted to try out that fishing operation. The plan was to hit the flats and island lagoons for bones, tarpon and maybe a permit via mother-shipped kayaks. The lodge is looking to promote their kayak fishing options and putting a couple writer/photographers on a bunch of fun fish couldn't hurt.

As the departure date neared I had gathered quite the stack of gear. Several fly rods from 7- to 11 weight. Floating lines, sinking lines, leaders, boxes of flies, miscellaneous accessories, clothing and a bunch of camera gear. Probably too much for a three day trip, but you never know. The goal was a single medium-sized checked bag and a carry-on. I was pushing it.

Then I checked the weather–dammit. The forecast was for 20-30mph winds, heavy cloud cover and rain was looking like a real possibility. As their name says, this place sits on the banks of the Belize River and in fair proximity to a couple other really fishy jungle rivers with feeder creeks and small brackish lakes. I recalled reading the exploits of Brister, Doggett and Pike from the old days of the Houston Chronicle outdoors section. They visited the Belize River Lodge several times and wrote of the baby tarpon and big snook in those rivers.

Time to rethink that gear pile. I thought briefly about ditching all the fly gear but decided to keep a light bonefish rig and a heavier stick for tossing permit flies and also capable of handling small to mid-sized poons. Hey, you never know. Weathermen aren't all that trustworthy and I'd kick myself if we arrived to ice cream conditions. The rest of the fly gear was culled in favor of a couple casting rods and a box of topwaters, plugs and soft plastics.

We arrived to heavy cloud cover and the predicted whipping winds. Disappointing for sure, but we were in beautiful Belize. Cold Belikins and exploring jungle rivers on kayaks beats the hell out of sitting in Texas watching it flood.

Even if we didn't catch a thing, hanging out at the lodge with the owner and listening to his stories of growing up fishing and prowling the jungles of Belize was worth the trip. Mike Heusner is a fourth generation Belizean, born in 1939. He has seen a Belize that I could only imagine. His love of sport fishing is obvious. A skin mount of his first snook on rod and reel still hangs on the wall along with a bunch of cool old photos. But it was his love of the environment those fish live in that really shined through in his tales. Birds, bugs, plants, history... he is a wealth of knowledge.

The first morning we awoke to rattling palm trees. The weatherman picked this time to be correct. Our young guide, another Mike, was undeterred and full of optimism. We loaded the kayaks and our gear onto his panga and set forth. As we cleared the mouth of the river the view of the flats was dismal. White caps as far as the eye could see. Mike pointed the bow towards a distant island with hopes that the leeside would be fishable. Nope. Next island–nope. The wind had churned the normally gin-clear flats to a chalky mess. Plan B.

Mike turned the boat back towards the river and took us on a ride down a creek that twisted through a cathedral of huge mangroves. From there he made a long run down an old canal, through a couple lakes, another creek and into the Sibun River. Scenes from The Mosquito Coast were shot here. Picture in your mind what a jungle river should look like and this is it.

We unloaded the kayaks and started plugging the shorelines. Drifting with the current and hitting every likely-looking spot, and there were many, resulted in a few half-hearted snook blow-ups and a couple hook-ups with feisty mangrove snapper. After relocating, Mike pointed out a large downed tree at a bend in the river, "There's always a tarpon around that."

Jeff eased into position while I got my camera ready. The first cast resulted in a huge boil and an airborne poon. Fish on! Oops–fish off. That's tarpon fishing.

The rest of the day was pretty much a replay of the beginning. The wind had pushed the tide a good bit higher than normal and refused to allow the predicted afternoon low tide to run out. The predators and prey were snuggled deep into the brush and virtually impossible to reach. A flurry of feeding jacks in the middle of the river saved the day and stretched our lines. I don't care what you say, a school of several hundred juvenile jacks busting topwaters is fun. These little ten pounders pulled our kayaks all over the place and put on quite a show.

Day two dawned with the same rattling palms. Due to an unfortunate bee incident, Mike wasn't available. Our new guide, Pedro, has been guiding these waters for 37-years and had some ideas how to beat this high tide. We went into all sorts of cool little creeks and backwater lakes off the river. Every one looked fishy as hell and they all produced the same noncommittal snook along with a couple more briefly-hooked tarpon. It was tough fishing no doubt, but I could tell by Pedro's frustration that these waters usually produce for him. Being a guide myself, I fully understood his feelings.

We only had a short time to fish on day three and stuck to the Belize River fairly close to the lodge. The conditions hadn't changed much, but the fish were at least a little more cooperative. The wind had subsided just enough to let the falling tide start moving some water. I finally got my river snook and we jumped several more tarpon that just wouldn't stay buttoned, not even long enough for a photo. After a second nice snook, sadly we were out of time and had a plane to catch. Just when it was looking like the bite was turning on of course.

I'm already scheming a rematch. Given that Southwest now flies direct to Belize City from Houston and the fares are crazy cheap, a quick trip is painless and affordable. If you're thinking of getting away from the onslaught of fresh water dumping into our bays, I highly recommend checking this place out. The lodge staff is very accommodating, the guides are top-notch and the food is awesome. Also, don't pass up the post-fishing veranda session of stories from Mike. They're the cherry on the sundae.