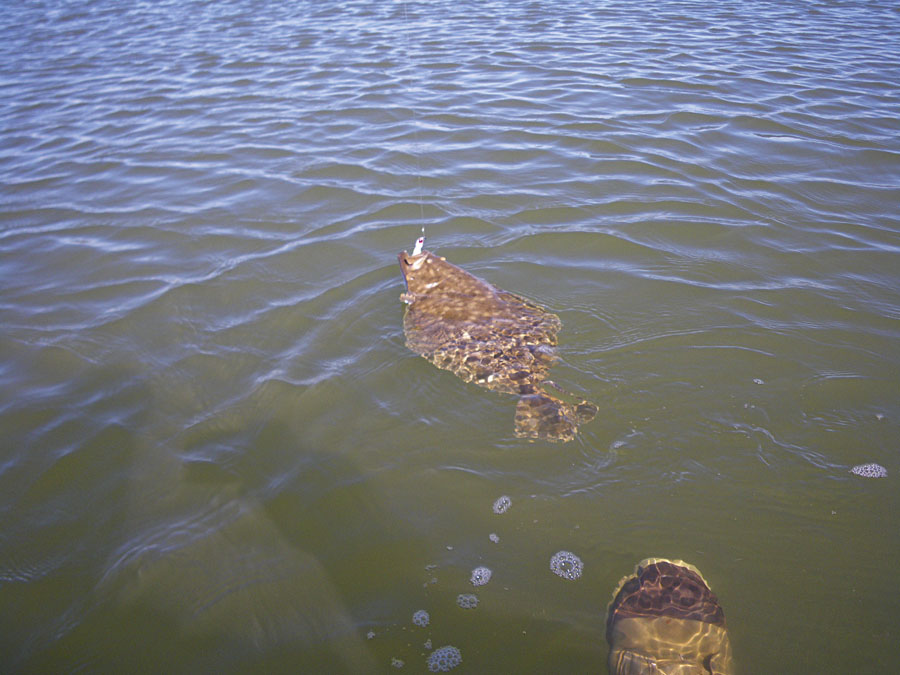 Who would argue when a flounder grabs your offering?
Spring has sprung and it is finally time to hit the marsh. The last few days have held steady southeast winds pushing the first good we have seen in a while. And now that the marathon effort we put into the Houston Fishing Show is in my rearview it is time to go play.

All the signs have been pointing to a strong spring fishing kick-off. The last few weeks I've been prowling around the marsh drains finding redfish stacked and waiting to invade. Any place with shell outside the drain and even the slightest drop-off in depth has been holding fish. The water wasn't too pretty and the mud was flat out nasty, but the reds were quite cooperative. These were fat healthy fish with an aggressive attitude.

On one of the more extreme low tides a couple weeks ago I took a break from fishing for a little hike through the marsh to take a look at a couple lakes. The lakes were completely drained. I love doing that when all the water is gone allowing me to see every oyster, drain channel and pothole. It is always a learning experience and I carry along a camera to aid my old brain in remembering the details. But the coolest and most encouraging sign was a tiny detail I almost missed. Squatted down near the entrance to one of the lakes to get a different perspective on a couple photos, I saw some wiggling going on in a nearby puddle. A closer inspection revealed hundreds of tiny shrimp feeding on the algae around an oyster patch. I started looking at the rest of the puddles and found the same thing. The shrimp hatch is looking awesome!
The only downside to early spring fishing is the wind. It is going to blow, write it down. And there will be days where it blows so hard that it makes locating these shallow water reds difficult. My article a couple months ago talked about looking for subtle signs in order to find the fish. Well that won't always work this time of year. The water will get dirty to the point you can't see an upper slot red in a foot of water. Those days will also have enough surface disturbance to hide the wakes of cruising reds and completely obscure the telltale jumping shrimp. Sometimes the birds will still betray the feeding reds, but not always.

So what's a marsh rat to do in such a situation? Go to what I call my searching lures. Something obnoxious, noisy or stinkyor perhaps a combination. This is not the time for subtle presentations and slow moving lures. I want to get their attention and entice them into showing themselves. At the same time I want something with which I can cover a lot of water. On days like that I'll be constantly paddling and fan casting until I can locate a concentration of fish or uncover some sort of reliable pattern. On a normal day I try to slip in and passively observe, on the windiest days it's more like stomping around trying to flush something out. It may appear to be a haphazard drill, but in reality I'm probably paying closer attention to the details than on the ice cream days.

This is the time to dissect the marsh. Pay close attention to where you are and what you are doing when the bump or bite occurs. Often times that one fish will lead you to the money pattern for that day even when you don't have the visual clues. Spend some time thoroughly working the bayou on your way in. Try the edges, the middle, the depths of the inside corners and the shallows on the outsides of the turns. Continue the search hitting the outside of the marsh drains, the drain channel and then just inside the lakes. Once inside the lakes you've got the calm side, the windy side and the ones that are getting raked long-ways. Most days in the upper coastal marshes I find the reds up tight to the edges, but when the flags are popping the fish can be anywhere so go ahead and work the whole lake.

Having said all of that, there are a few fairly reliable patterns that tend to emerge. If the shoreline parallel to the wind direction is irregular it will often hold fish off the points. The wind is pushing a current along the shoreline and pulls the bait with it. The points break up the flow and concentrate the bait drawing the predators in. An island perpendicular to the wind provides a similar situation in that the current and bait are pushed into the island and then swept around the ends. Quite often a larger island will have a gut carved out of the bottom by these currents. Perhaps my favorite is an area many kayakers avoid, the cove exposed to the brunt of the wind. It isn't the most comfortable place to fish, but when the wind is really howling the baitfish will get pushed into these coves and they can't escape. The off-color churning water disorients the baitfish and provides cover for predators to ambush them. In this situation you need to throw as tight to the shoreline as possible, that's where all the action is taking place.

Now back to the lures. Like I said earlier you want something that gets their attention and allows them to hone in on your offering. Perhaps the most commonly used lure in these situations is a big noisy topwater. Walk the dog aggressively and get those rattles going. They won't always eat it, but even when they aren't on a topwater bite they'll at least swirl or tail slap it. I've never really figured out whether those are missed attempts to eat or if they're just aggravated into reacting. Either way, at least you know they are there. If you get some slaps, switch to something subsurface to get hooked up.

That something for me is quite often a spinnerbait. I prefer the safety pin style that allows me to attach my own jighead and soft plastic. My choice will usually have a copper blade; gold would be my second choice. In fact, spinnerbaits have become my go-to bait in off-color conditions. When I first started throwing spinners I used whatever paddletail soft plastic I had handy figuring color didn't matter too much with the flashing blade. I noticed that in really dirty water I was feeling thumps, but not getting any hook-ups. It eventually occurred to me that they were hitting the blade and ignoring the part with the hook in it. Through experimenting, I've arrived at using a curly tail plastic in white or something with a chartreuse tail to give them a target. The hook-up ratio has seriously improved.

When all else fails and I really need to get my line stretched it's time to get down and dirty with lots of noise, commotion and scent. If there's a red in the area a MidCoast popping cork with a gulp shrimp dangling underneath will get the job done. There are several models to choose from, but I prefer the Inticer or Mojo. They cast well in the wind and make a lot of noise when popped aggressively. When a red shows up to check on all the commotion there's a smelly Gulp hanging down right in their face. Done deal.

By the time you read this those little shrimp will be the perfect snack size for those prowling reds and if the wind will lay I'll be wearing 'em out with my fly rod. If not, I've got an alternative plan. Come on out and join me.