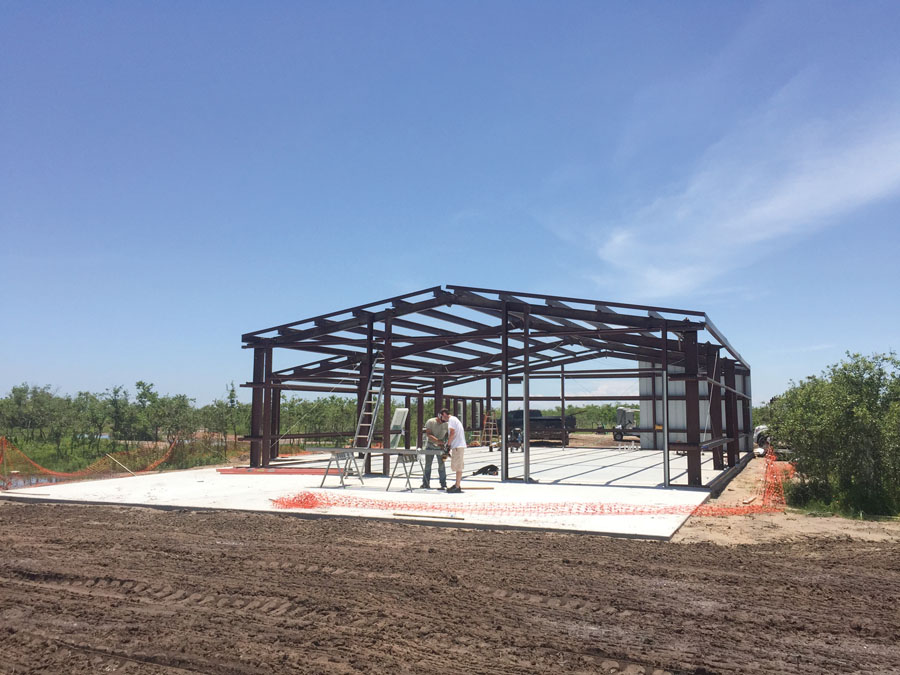 Future home of Capt. Scott Null’s guide service.
A good life is like a good book. Chapters come to a close and lead to expectations for the next one. Life generally moves forward at a steady pace and then there are sudden shifts that signal a time to turn the page.

For Camille and I, that time has come. A couple chapters back I retired from being a homicide detective and went into a new career in outdoors sales with a little guiding on the side. At that time we also purchased some acreage between Port O'Connor and Seadrift, very near the home offices of this magazine. The purchase was made with the thought that someday we'd make it our home surrounded by deer, turkey and quail. "Someday" seemed a long ways off and at times felt more like a dream than something that would actually happen. We still had kids to raise, jobs to work and too many bills to pay.

Several years ago I created a little subchapter by moving into full time guiding in the Galveston area. I have truly enjoyed taking people fishing in the areas I prowled as a youngster. The marshes around Galveston don't often get the respect they deserve as a sight-fishing venue. Most folks have it in their mind that sight-casting starts about midway down the Texas coast. I love it when someone who has lived in this area their whole life tells me they never knew these places existed and had no idea you could actually target visible reds here. Many of these people have become regular customers as well as good friends.

Over the past year I have stepped off into the second half century of life, watched my two beautiful daughters stretch their wings as they left the nest, and become a granddaddy to the cutest little girl who has stolen my heart. Just last night I learned there will soon be another grand baby to spoil. Life is good.

With all these changes taking place Camille and I suddenly realized there was nothing holding us back from turning the page and starting the next chapter. All the dreaming, planning and scheming is finally coming together. Building the infrastructure of roads, electricity, water well and such, were completed a couple months ago. By the time you read this the boys at M&M Unlimited will have the first structure completed, a big metal garage/shop that will eventually have an apartment inside. After a rocky start searching for a contractor to get this done, working with Caleb and Jeremy to complete this phase has been smooth and easy. I would heartily recommend these guys.

So I say all of that to say this; I'm transitioning my guiding from Galveston to the Port O'Connor/Seadrift area. Between the new building and the travel trailer I'll have a comfortable base of operations allowing us to move down there while we work on the real home.

I first began fishing this area when my father-in-law, Chuck, took me on a long weekend trip in the mid-80s. At that point in my life I had only known the typically off-color waters of Galveston. I'll never forget the first time, pulling up to the shoreline just east of the old Army base, and looking at the crystal-clear water and a bottom covered in grass. Chuck dropped me and a buddy off for a wade while he took Camille to do some drift fishing. David and I eased along the shoreline casting topwaters over sandy potholes catching trout and reds. I was hooked.

Over the years I've fallen into lust with various ports up and down the coast. There have been periods when I only went to Port Mansfield, Matagorda, Aransas Pass and Corpus. I have great memories from all of these places but I always seemed to end up back in Espiritu Santo Bay. I love the variety of fishing opportunities from kayaking or poling the back lakes to wading the sandy shorelines to making the short run through the jetties for shots at pelagics.

So here's the plan. For now, I'll still be running my East Cape Fury poling skiff guiding light tackle and fly fishermen. Sight-casting to cruising or tailing reds will be the main focus, but in the clear waters, getting a shot at a big trout is always a possibility and incidental flounder will happen. If you're in for a fly fishing challenge there are plenty of picky sheepshead and puppy drum to test your presentation skills. And to test your endurance there are usually some bruiser jacks available along the edges of the flats.

Once we move into the hot and calm dog days of summer, slipping through the jetties and seeing what species wants to play is an option. Unlike the upper coast, deeper water comes in a lot closer, providing greater opportunity for smaller craft to venture out. Legitimate shots at tarpon, kings, ling, tripletail and jacks are a possibility. This is something we can make plans to do, but Mother Nature will always have her say as to whether it's a go or no-go. If you'd like to try it we'll just have to remain flexible and know that redfish in the protected waters will be the fallback plan if the wind blows.

After we get settled into our new life I plan to pick up a larger boat to allow getting out to run the jetties and beachfront more comfortably and safely. East Cape has a new 24-footer on the drawing board that would fit the bill quite nicely. Hopefully the unveiling of this craft will coincide with my plans to acquire it. The idea is to build it out with fly fishing in mind. I don't really know for sure how many fly fishermen will be interested but, I'm going with the "build it and they will come" theory.

As a bonus, this boat can also be used as a mothership for taking kayaks over to the back lakes of Matagorda Island. I may not have a clear handle on the number of offshore fly guys, but I know there are adventurous kayakers out there who would love a chance to go exploring.

It'll still be pretty easy to talk me into coming back to Galveston during the awesome October-November marsh fishing and I already have some dates booked for that with longtime customers. Shoot me an email if you're interested and we can take a look at the schedule. And, of course, I'll still be heading to Louisiana for sight-casting bull reds in the marsh come January and February.

Well there you have it, time to turn the page and see how this next chapter plays out. Camille and I have lived our entire lives in and around the Houston area along with 6.5 million of our closest friends. Moving to an area where the population of the entire county is barely over twenty thousand will take some getting used to but I think we can adjust.