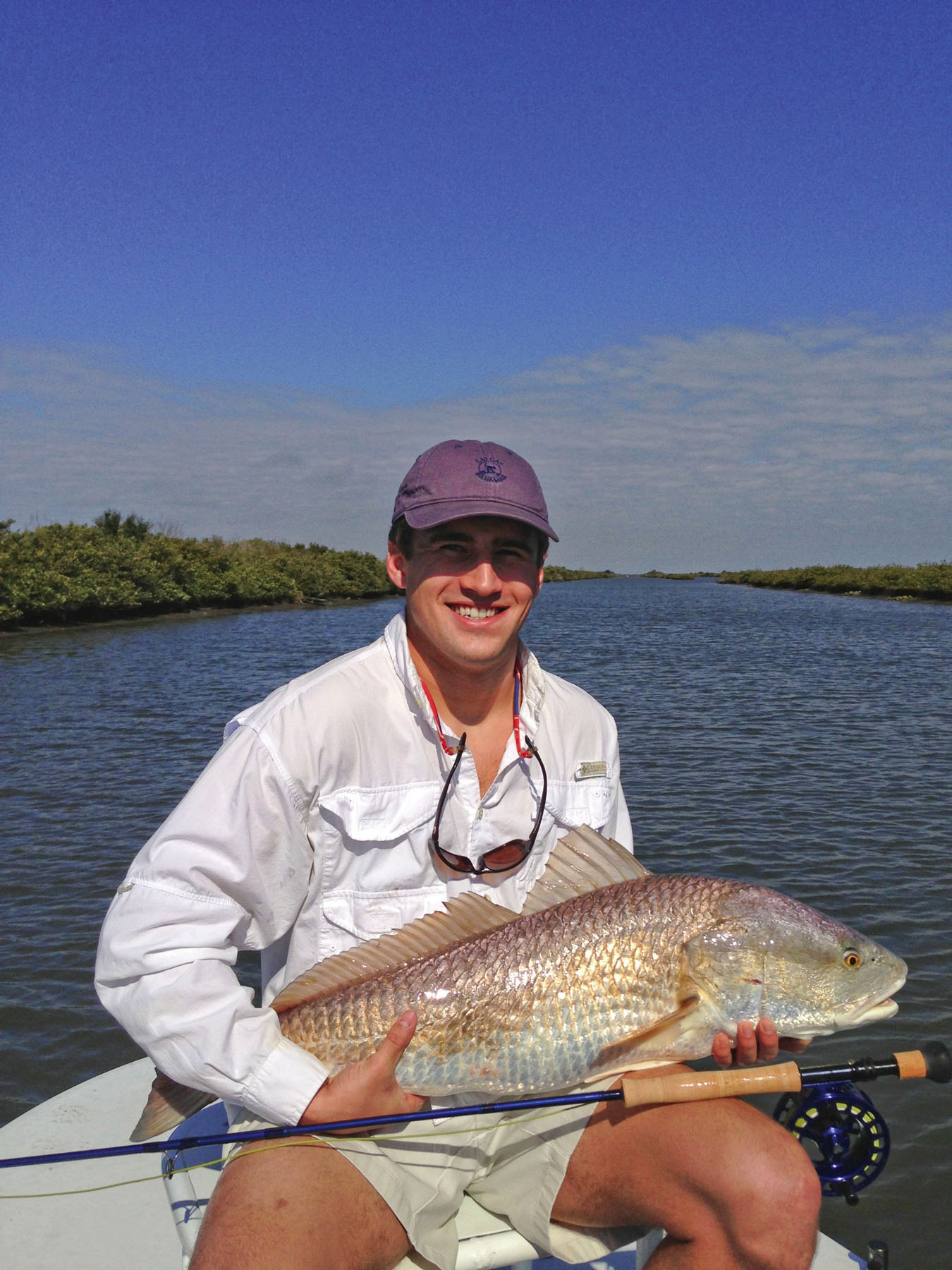 Guiding a client to a memorable fish is more enjoyable than catching it myself.
"Big red moving right to left at fifty feet about one o'clock."

"He's hugging bottom. Tough to see, but he's there. Now at twelve o'clock and forty feet."

"I still can't see anything."

And as the beast flees the scene taking all of the fly line and a good bit of backing, I grin like a fool from my office atop the poling platform. I never tire of this game. Day after day, week after week I get to watch people catch fish. Many of my contemporaries here in Texas don't get what I do. It is the accepted norm here in Texas for guides to fish alongside their customers. I may go weeks without even making a cast during the busy season. And that's perfectly fine by me.

The way I see it I'd rather my customers catch fish than watch me catch them. But in my own way I am still fishing. I fish by proxy. It is far more challenging to help someone else catch a fish than if I were making the cast. Standing high above the action I can see the fish. Through my words I can place the cast in the right place. With further guidance I can retrieve the fly at just the right pace for it to intersect with the cruising fish. And with just the right twitch at the right moment I get to see the fish eat, my absolute favorite part.

When it all works there is no greater satisfaction than having the angler look over their shoulder and smile.

One of the great benefits of my vantage point is getting to watch the interaction of fish and lure. Over the past ten years I have to say that I've learned far more about what makes a fish eat, or flee in terror, than I ever learned while standing there chunking to wakes, tails or the slight outline of a fish. I could always imagine what the fish and lure were doing and knew that certain retrieves seemed to work better than others, but it was only an educated guess most of the time.

Feeding a wary fish a fake in a few inches of water is challenging. First you simply need to see the fish. It sounds simple enough, but you'd be surprised how many people can't do it. You need to train yourself to look into the water and not just stare at the surface. Also quit thinking you're going to see the whole fish. Most of the reds I spot from the platform first appear as just something out of the ordinary. Depending on water clarity and bottom type it could be just a slightly darker shadow or perhaps a lighter shape slowly moving. Most often the first thing I see is an odd whitish spot that turns out to be a pectoral fin.

Once you get the idea there's a fish in view try to figure out which way it's facing. Sounds easy enough, but I see far too many people hurry the cast before ascertaining this critical information. There's only one end that eats.

While doing this I also try to get a read on the fish's demeanor. Is it actively hunting? Is it just sitting there resting? Or is it starting to move away having sensed your intrusion? Being able to sense the mood of the fish determines where and how I want to land the fly or lure. It also makes a big difference in the speed and type of the retrieve. This is something I've wanted to write about for quite some time because it's probably one of the biggest mistakes I see people make. One particular retrieve won't work on every fish. It's hard to put into words, but I'll give it a shot.

Fish that are actively feeding are the easiest of course. You can get away with a lot of mistakes when they're charging hard. The only issue is getting noticed among all the bait they're feeding upon. I like to make the fly splat down within a foot or so to get their attention. Once you know they've seen it, make a quick retrieve. Actively feeding fish have gotten everything stirred up and something trying to get away from them is natural. They're in attack mode and you likely can't move it fast enough to keep them from eating.

Unfortunately the hard-charging feed isn't the norm. Most often reds in shallow water are on the prowl and hunting. They may be trying to bump a shrimp loose from the salt grass or catch a crab slipping up out in the open. Reds cruising the edge of the flooded salt grass want something to flee from the grass, be it a shrimp or baitfish. The cast can be a bit tricky, but you want it as close to going into the grass as possible. A foot short of the grass might not get their attention. Too long and you could foul in the grass. Most shorelines aren't perfectly straight and uniform. If possible I like to wait until they're coming up on a small indention or a point. Drop it into the opening or just behind the point and bump it out just as the fish approaches.

Reds hunting an open flat can be tougher than they would appear. Many times they're just wandering aimlessly, constantly changing direction. I like to lead these fish by several feet and fall just beyond them so that the lure crosses their path. The wanderers seem to always change directions just before the two meet. The more zig-zag in the fish, the less lead I'll give. Try a steady retrieve until the fish shows interest and then give a little quicker twitch. Think like a baitfish. Once seen by a predator he doesn't just keep strolling along or surrender. If they're on a steady path I like to move the fly or lure into their path and let it settle to the bottom. As he gets close give it a couple quick twitches and let him think he's spooked something off the bottom.

Tailing reds are what we all love to see. Nothing gets the blood pumping like a big single tail waving above the surface. As easy as it appears tailing fish are sometimes difficult to get to eat. Keep in mind that the reason they're tailing is they are looking at something on the bottom. Their field of vision is relatively small and if you want to get bit you'll need to get into that zone. With a lure it's usually best to cast a few feet beyond the fish and ease it into the area. Once you think it's there give it a couple quick, small twitches. Resist moving it too far or you'll take it out of the zone. With a lightweight fly I like to just drop it quietly right in front of their nose and let it settle. If that doesn't get bit, a small quick strip usually will. Reds tailing in thick grass are tougher than those on a clear bottom. With their faces buried in the grass they can't see anything more than a couple inches from their nose. It might take a few tries.

Often times the most frustrating fish of the day is the sulker, a big ol red that you stumble upon as he's resting. This fish isn't going to go far to eat. The cast needs to get the fly close, but too close and they'll spook. The good news is you usually have time on your side. Try casting beyond the fish and easing it into position. If that doesn't work make the same cast and twitch it past his nose. After three or four failed attempts I just go for broke. Splat the fly just short and to the side of his head. He's either gonna spook or eat.

This sight-casting game can be frustrating, but with time and experience it gets easier. Put in enough years and it almost becomes instinctive. Accept that there will be failures and revel in the successes.