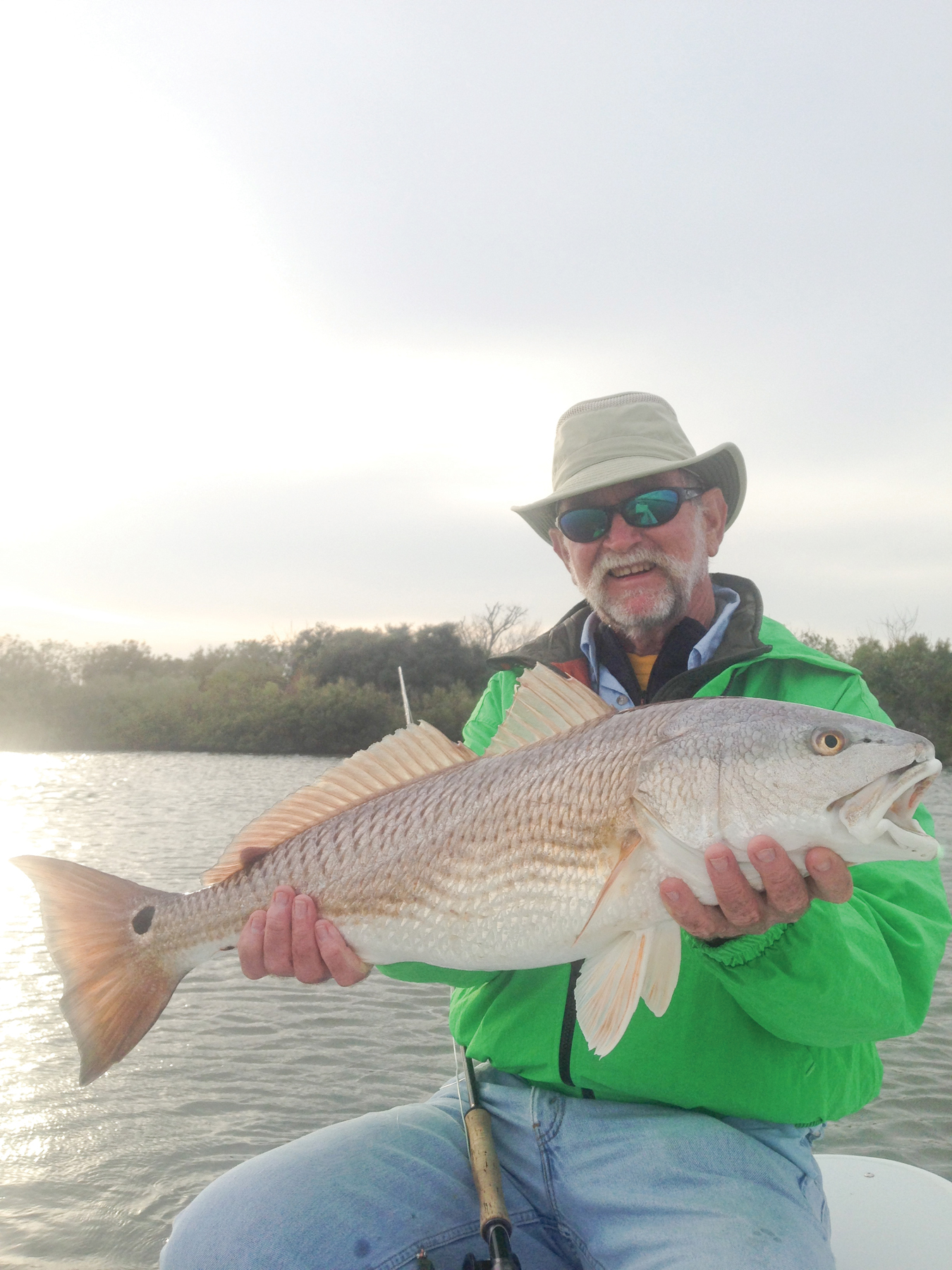 Anyone who has read here for long knows I'm a redfish addict. I love studying their habits and trying to figure out what they're going to do from day to day and season to season. Well, the spring transition is underway. Time to re-figure.

The cold fronts are done and the water along the upper coast has crossed the 70-mark. This means several things in my world. First off, the gin-clear water of winter has turned green, or perhaps brown if the nasty southwest gets to honkin'. Sight-casting in the marshes has transitioned from seeing fish cruising in a foot or two to looking for signs and maybe doing a bit more blind-casting. All is not lost, though. Predators on the feed in shallow water produce a lot of sign–if you know what to look for.

The most obvious, of course, are the times when they get skinny enough to actually show themselves. Almost every customer expresses hope that we'll find tailing reds. True tailing though doesn't happen all that much in the marshes of the upper coast, at least not enough to count on it. Reds on submerged grass areas are much more likely to do the classic headstand and tail wave. Marsh reds tend to tip upward briefly and then disappear. Blink and you'll miss it. The next tip may happen a few feet away or perhaps yards down the shoreline.

Having observed them from atop the poling platform for years, it makes sense. The typical marsh shoreline is a vast mud flat. There are occasional crab burrows, chunks of oyster or maybe an old tire; but little else to hold their attention. Cruising redfish will slide over to these little pieces of structure and lean in to look around for a bite. While doing this their tail often slips above the surface. Once satisfied that nothing is there they'll move on to the next spot. The exception is when they spot a crab. It's fun to watch them tail like crazy trying to figure out how to get the snack.

To catch these intermittent tailers in dirty water takes patience and a little luck. You can either wait them out for the next time the tail appears and make the cast, or make a guess-cast where you think they may have headed. When using spin or casting gear, a Buggs jig is our go-to when I see this kind of activity. When fly fishing, it usually takes a weighted fly to get down to the bottom and get their attention.

What I tend to see more often than tailers are crawlers. Redfish aren't shy about venturing into super skinny water to feed. A good low tide early or late tends to be best, but I've seen them plowing through inches of water in the middle of the hottest days of summer. Nothing gets my blood pumping like seeing a big red waddling across a mud flat with his back exposed to his eyeballs. These fish are there to feed and tend to be pretty aggressive. They're also very spooky. I'm sure they feel pretty vulnerable while doing this.

Approach only as close as you feel comfortable casting, the further away the better. A soft landing is critical. Non-weighted soft plastics like a DOA shrimp will do the trick. If you must have some weight in the lure to make the distance you'll need to land it away from the fish and then reel it into position. If the red is cruising close to the bank I'll throw onto the mud and then slip the lure back into the water. You want to position the lure in their path and let them find it. When you think he's close enough to see it, give it a twitch. Too much and he'll spook, not enough and he won't notice it. Fly fishing really shines when chasing crawlers. Dropping a non-weighted fly right on their nose will often get an impressive take.

Absent tails or backs showing, it comes down to deciphering subtle clues. Baitfish will often snitch on a cruising red. We've all heard the term "nervous bait." I am often asked what that actually means or what it looks like. Well, it can be a lot of things. Any baitfish that isn't acting calm and going about its business could indicate a predator is near.

Mullet nosing along the top or lazily jumping aren't nervous, they're just doing mullet things. Mullet gathering into tight groups on the surface are nervous; something is up and they're not happy. Blind-casting in the area behind or to the sides of them will often get you bit. A mullet that jumps on a low trajectory one or more times has crossed from nervous to frightened. Try to hit right on his tail. You'll get bit and save his life. It's a win-winunless you're the redfish.

Spring brings swarms of various juvenile baitfish. Often these schools will appear as a cloud in the water. They always look nervous on some level. When you're the littlest guy in the marsh it's understandable. What I look for with these big schools of tiny bait are little showers clearing the surface. Most often this will indicate little trout or ladyfish slashing into the bait balls from underneath. But sometimes it'll lead you to a red that's cruising below them.

Small, shiny flies and spoons will usually be the best options, but I've been frustrated many times in these situations. It's hard to imitate a bunch of micro-bait with a lure and I think the predators are just rushing into the biggest pile instead of targeting individuals. One day I had this happening with Spanish mackerel. After throwing most everything I could think of I had an idea. A clear, soft plastic paddle tail with lots of glitter. It must've looked like a small school had separated because it worked when nothing else would. Since then I've also used it on flounder busting into passing bait balls.

The earliest of juvenile shrimp will also be showing soon. They'll be really tiny and hugging the saltgrass shorelines. When a red cruises down a shoreline the little shrimp will dimple the surface like rain. They aren't big enough to be on the red's menu yet, but they apparently don't know that. Lead the rain shower a little bit and throw tight to the grass. It's just about a sure thing.

Sight-casting in the off-color water of spring isn't easy and it doesn't always work out. If the reds are on the feed and you're observant it can certainly be productive, but when they go neutral and the bite is off, it's time to bite the bullet and start blind-casting. Still beats being stuck in the office or mowing the lawn.