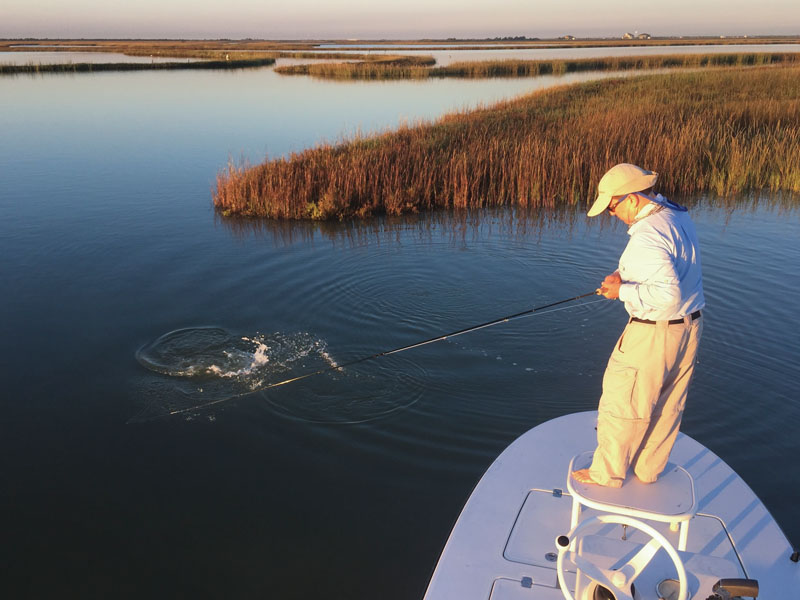 Some days it’s all about picking the right marsh drain.

Sight-casting to redfish in Texas this time of year tends to be a boom or bust proposition. A common call I get is the potential customer asking how the fishing will be if they book a trip in December. My typical answer is that it could be really good or it could just flat out stink.

Why? Well, to start with, the weather swings are so crazy that it becomes difficult to pattern the fish. We could have a late-arriving winter or it could be bitter cold the entire month. The most likely scenario, year in and year out, is some weird combination. A blasting cold front followed up by several days of short sleeve weather–there's simply no way to book something weeks in advance and have any certainty what you'll get.

Don't get me wrong, fish can still be caught most days no matter the weather. And we all know a day on the water beats being at the shop or in the office. The problem lies in that it may not always be that perfect sight-casting scenario you have pictured in your head me poling you across a shallow flat with blue skies and light wind while reds tail and cruise around in crystal clear water and eat your fly with reckless abandon.

Generally speaking there is a pattern to early-winter weather. Mother Nature doesn't always stick to the script but most often the way it works is an approaching front brings some cloud cover and moist air in on a stiff southeast breeze. The tides and air temps will generally rise above normal. If the water temps have already been sufficiently chilled, the water clarity will likely remain acceptable. These pre-front conditions can also lead to a pretty aggressive feed. The issue though for the sight-caster is being able to see the fish. Cloud cover and elevated water levels often hide them until we are too close for a decent shot.

Under these conditions I urge folks to do some blind-casting to likely looking areas or suspicious swirls–if it looks fishy it's worth a try. While doing this you'll also need to remain on alert for that red that seems to suddenly appear ten feet off the bow. A quick underhand pitch with a jig can score. If you're working with the fly rod–well, good luck.

As the norther swings through we'll likely see some rain on the frontal boundary and then a 180 wind shift. Hopefully it'll be a fast moving front that doesn't stall out and give you three days of nasty, misty Seattle weather. Most folks will elect not to fish during passage of the front, but it is often one of my favorite times to be there. The elevated temperatures and water levels just prior to the front will have bait and reds scattered throughout the marsh. As the front blows through the north wind will push the water levels back to normal. If the arrival coincides with a naturally falling tide and the wind will be 15 or more, you really need to be there. The falling tide will accelerate and everything will be funneling out of the marshes and back lakes. If you pick the right drain the results can be epic. This isn't that calm, serene kind of stalking sight-casting. It is more like wild and crazy fish boiling the water and bait running for their lives kind of stuff. My buddy recently referred to it perfectly when he said, "The reds were going all Nat Geo."

Immediately behind the front is usually the toughest. The water probably got a little dirty from the big wind shift, the air and water temperatures dropped and the fish likely fed pretty heavy on the frontal passage. If the front was really strong the north winds will stay up for a day or two as well. About the only option during this time is dredging the deeper guts and bayous. The good news is they'll be concentrated into smaller areas. The bad news is they'll be tough to feed. On really strong fronts where the north wind keeps blowing for three or more days I've had some awesome trips. The fish are stacked, the water is low and they'll eventually get hungry.

But when things settle down it can lead to that perfect day you have been picturing. The cooler water will clear up and the tides will likely stay below normal. The sky will be brilliant blue and the winds will die to zero. As the sun warms the shallows the baitfish will slip out of the deeper guts followed closely by the redfish. These are the winter days I love. The boat launches are void of traffic and there won't be another boat in sight. The fish are hungry and the conditions for spotting them are as good as they get.

The key to December sight-casting is being flexible. Staying flexible has a couple different meanings. If you're going no matter the conditions, work them to your advantage and run your game based on what you find. Don't get stuck in a rut and beat your head against the wall trying to make the fish do what you'd prefer them to. The better kind of flexibility is being able to bail out of work to hit those perfect conditions. Take care of the honey-dos while the weather is crappy and cash in your hall pass at the perfect time, which rarely falls on a weekend. Those of us lucky enough to have that flexibility know what a perfect December Wednesday on the flats looks like. I can't wait.