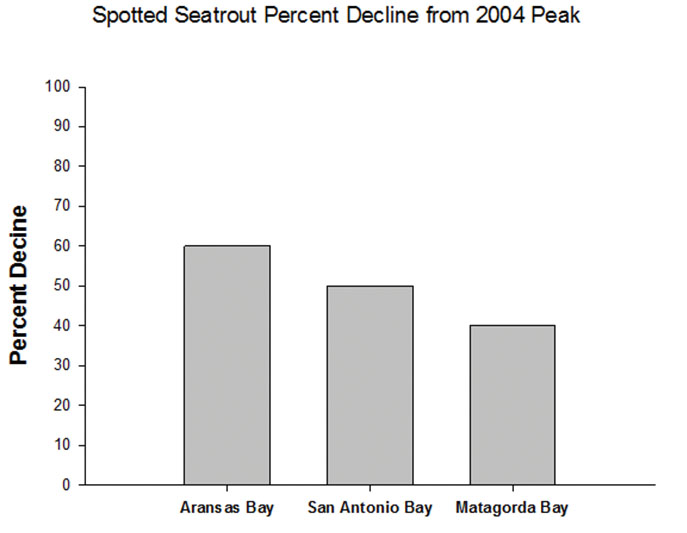 Texas has a world class spotted seatrout fishery, and there is no doubt about it. Our managers come armed with the best monitoring program and management strategies that are the envy of every state agency on the Gulf Coast. Decisions based on over thirty years of data are robust and have a long and successful track record with demonstrated results benefiting Texas anglers. An effective enforcement program has minimized illegal netting and keeps everyone else honest. Couple that with our productive estuaries and conservation-minded anglers, and it equates to phenomenal fishing. But we have to ask ourselves, can we maintain what we have created?

Unlike the situation in many states, Texas saltwater fishing is expanding. Angler participation and new recruits into the saltwater fraternity are growing by leaps and bounds. During 2001-2006 saltwater anglers in Texas reached 1.2 million anglers and the number of days fishing increased from 7.5 to 15 million. Many of the new 286,650 fishers were seeking the holy grail of saltwater fishing in Texas the speckled trout. It is almost impossible to imagine that our fishery can support this type of angler pressure, but it has done so for many years. The underlying question is, can the fishery support current and future levels of harvest?

We are at an important crossroads about the fisheries future. First and foremost is the matter of sustainability. We have proven tools to manage our fisheries, such as bag, size, and season limits, but there are also environmental issues as well adequate freshwater inflow, water quality, and habitat. The second and related problem to solve is what do we want our fishery to look like? It is the old question of quantity versus quality, which is admittedly a sliding scale and one subject to endless debate. We make the argument that moving the scale towards a quality fishery accomplishes several desirable goals: 1) a more sustainable fishery that can better survive extremes, like freezes; 2) a greater economic return for those economically dependent on recreational fishing; 3) insurance against almost certain future increases in fishing pressure; and 4) a more enjoyable fishing experience for the rest of us.

Texas saltwater anglers have moved considerably along the quantity/quality scale over the years. After rebounding from commercial overfishing, recreational fishing in the late 90s and early 2000s was exceptional. The bays supported unprecedented numbers of fish reaching the new "trout" benchmark of all-time high abundance between1996 -2004. With increased angling participation and effectiveness, trout were being removed at a record pace. Both quantity and quality definitions were met and often exceeded. Tremendous fishing pressure and a series of trout-killing freezes took their toll. The condition of the fishery appeared no longer to be as resilient and responsive as it once was. It became clear that coastwide regulatory regimes might no longer be a viable means of sustaining the fisheries we all desire.

Even the best monitoring program takes time to collect, process, and analyze the data. Both fisheries experts and anglers can interpret the output differently and generally do. However, we are now seeing signs that these harvest rates may not be sustainable. Alarmingly, by 2009 spotted seatrout abundance had decrease by 60% in Aransas, 50% in San Antonio Bay, and 40% in West Matagorda from the 2004 peaks of what we know the bay can support. Thus, the trout pie is shrinking with more anglers participating, and clearly some measures need to be employed to avoid continued downward trends. Our review of the data shows "low recruitment" (supply of young) as the primary culprit behind these declines. Data showing low recruitment certainly raises the brows of fisheries managers, because we know when there are fewer spawning adults you get low recruitment, and the risk of overfishing the population becomes high. The solution is Fisheries Management 101: 1) a reduction in harvest will increase spawning adults in the population; 2) an increased number of reproductive adults equates to more recruitment; and 3) an increase in recruitment leads to rebuilding the population. History and experience tells us limiting take is the most effective and resource-minded tool to rebuild the populations. Thus, we suggest a decrease in the spotted seatrout bag limit from 10 to 5 fish per day per angler for the lower Texas coast from Matagorda Bay south.

The TPWD Coastal Fisheries monitoring program is widely acknowledged as the best of its kind in the world. A peer-review by an independent panel of nationally recognized fisheries scientists reaffirmed that status. Its comprehensive nature and 30+ year record makes it a powerful management tool. The outcome of management decisions based on this database over the years has proved effective and the result has been the restoration of a recreational fishery unprecedented in the USA. The monitoring program is robust enough to support a regional management approach and maintain the sound science base for decision-making that Texas anglers expect. Moreover, it was arguably designed to allow that option.

Any questions about the effectiveness of a five trout limit and the ability to enforce it was answered in lower coast anglers in the Lower Laguna Madre. A 5-fish bag limit management strategy was put into place there in 2007. After several years the results are what was hoped for and appears to be an outstanding success story. Just ask any anglers fishing down south. There is a reason that the King Ranch Shoreline, Baffin Bay, Badlands, Yarborough, Rocky Slough, and the Land Cut are in the rear view mirror of many boats as they race to the Lower Lagoon to get in on the action. Ironically, anglers are landing more and larger fish, and the population is remaining stable. It is early, but all indications are very positive for trout populations in the Lower Lagoon.

Now for the bad news the trout bubble has burst, particularly for the middle Texas Coast. The data and trends are alarming (see Graph).

However, there is a silver lining. Trout are prolific spawners and fast growers. We have options, and it is not at all too late. There is a simple precautionary fix to return to the "Good Ole Days" of 1996 -2004 and protect the future of the spotted seatrout, and we only have to do two things:

– Make the trout pie larger by increasing recruitment of young fish into the fishery, by
– Reducing the bag limit from 10 to 5 fish

These changes will result in increased spawning and future recruitment; thus, rebuilding the population. These new limits would theoretically reduce the per-capita share per angler but at the same time conservatively manages the fishery as a sustainable population.

A word of caution These data finally support what those on the water every day have been telling for some time. Clearly, we need solid science to support and base our decision, but we (scientists) need to pay close attention to those experiencing declines firsthand on a daily basis, and use this information to take precautionary steps that help to prevent us from going backwards in spotted seatrout management.

"A bright future for saltwater fisheries"

There is a change of culture afoot. The quantity/quality scale is moving in the right direction. Texas saltwater anglers have long supported conservative limits for red drum (even declining opportunities for increasing bag limits) and overwhelmingly reaped the benefits. This bodes well for a sustainable and quality trout fishery that will continue to generate billions of dollars of economic benefits for Texas. We hear and see other evidence of that movement all the time, and it is catch-and-release angling. Do not be misled, we wholeheartedly support keeping a reasonable amount of fish, but wise use of the resource can carry us a long way; plus, five trout still generate a lot of fillets. We also understand there are many from inland areas that don't get the opportunity for fresh fish, and would still like to adhere to the meat haul mentality. There is room for that as well just not with spotted seatrout. We still have redfish and black drum that are at all-time highs. Black drum will even readily take scented artificial lures for those in the know, and in our opinion, they are some of the best table fare of our inshore species.

Some remain concerned about survivability of spotted seatrout after catch-and-release. Numerous studies from simple tagging to recent state-of-the-art acoustic tracking carried out at The Harte Research Institute for Gulf of Mexico Studies (HRI) have shown on average 90% of the released fish survive. Greg Stunz is leading an effort to establish a Sport-fish Research Center at HRI to continue to add to our knowledge in this regard and would welcome your interest and support. You can learn more about his work by visiting: www.harteresearchinstitute.org.

It is time to take the next and necessary steps to sustain our world-class fishery here in Texas. All the information we need exists, and in Texas Parks and Wildlife Department (TPWD) we have the expertise and capabilities to do so. What the TPWD Commission needs is our continued support and the best thing we can do right now is support a 5 fish limit for the lower Texas coast.
____________________________

Dr. Larry McKinney is the Executive Director of The Harte Research Institute for Gulf of Mexico Studies. Dr. McKinney came to HRI from the Texas Parks and Wildlife Department (TPWD) where he retired after 23 years of service as the former head of Coastal Fisheries at Texas Parks and Wildlife Department. Dr. Greg Stunz is an Endowed Chair for Fisheries and Ocean Health and leads the Sport-fish Research Group at HRI with over 15 years of sport-fish research experience.

More information about can be found at www.harteresearchinstitute.org.