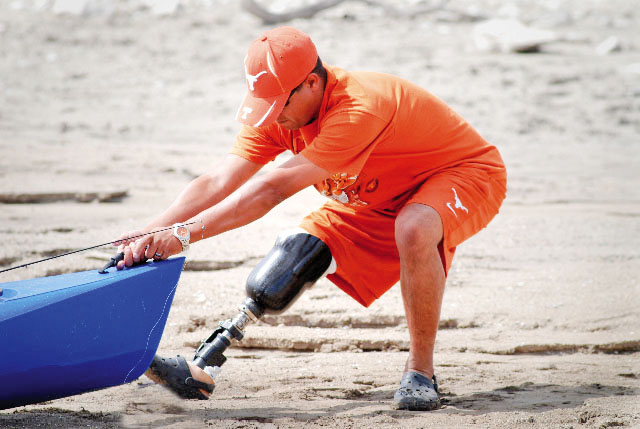 I'm not handicapped!
Back in 2007 I wrote a piece about taking some wounded soldiers kayak fishing. It was something a few of us were doing to help take their minds off of the rehab. We figured a day on the water would be a welcome relief from the realities they were facing in the hospital. A couple years later I wrote another piece about Heroes on the Water (HOW), the organization that was spawned by those first outings. At that time Jim Dolan, president of HOW, was working to get better organized in order to help as many soldiers as possible. By that point it had become clear that taking these young men and women kayak fishing was reaching far beyond just an outing away from the hospital, it was actually helping to heal the mental wounds suffered by so many of these young people. Kayak fishing is now accepted by the military as an effective rehabilitation tool.

Jim commented, "Spend a day on the water with a group of soldiers and you will understand the passion behind this program. The injured soldiers are literally captains of their own kayaks – moving around on their own at their own pace, experiencing nature up close, and earning bragging rights for their catches. Kayak fishing is therapeutic for anyone, but particularly for military personnel recovering from injuries and trauma. Our mission is to give these heroes a chance to enjoy a challenging outdoor sport that allows them to decompress from the stresses related to combat and from the physical and mental rigors of rehabilitation, and to join the kayak fishing band of brothers."

Jim, an American Airlines pilot and military vet, along with his wife, have worked tirelessly since those first outings. HOW has grown far beyond what any of us could have dreamed. At this time there are more than forty chapters in twenty-two states with over 1,100 volunteers having provided more than 6,100 vet days on the water. Amazing. I was prompted to write about HOW again by a couple of things. First off, Jim has decided to retire from American in order to spend even more time working with HOW. I'm honored to call Jim a friend and admire his determination and dedication to help as many wounded soldiers as possible.

Second was a recent interaction I had with the wife of a soldier helped by HOW. I was visiting my good buddy Captain Dean Thomas down in Aransas Pass while he hosted a couple young soldiers for a few days of kayak fishing. Over the years Dean has "adopted" several of the guys he's met through volunteering with HOW. Dean and his wife don't just talk the talk, they walk the walk. These soldiers and their entire families are often welcomed into their home. Between fishing trips I talked with the wife of one of the soldiers about what HOW had done for her husband. I always knew the program helped, but hearing their story made me want to further spread the word of this great organization. My memory isn't what it used to be, but luckily she recently wrote an article detailing the story of his first HOW trip. I couldn't have possibly written it any better so I'll just let you read her words.

"It's like a painting in my memory – a single, significant moment of this journey. A few street lamps cast a surreal glow in the dark, early morning fog. He barely even looked at me as I dropped him off and helped with his gear. He didn't tell me goodbye; he didn't kiss me. As I drove away, I looked back up at him, planted in the middle seat of the white passenger van. The van's interior lights highlighted his hunched form. His jaw was set and I could feel his scowl even though it was hidden by his ball cap. No one else was in the van yet, but he was ready. He was a man on a mission. He was a man going fishing.

After he returned from his first Afghanistan deployment in 2009, he bought a fishing kayak. On Saturday mornings he loaded up the yak on our little Toyota Corolla and headed off to the lake by himself. He was always more relaxed and easier to get along with when he returned from those early morning fishing trips. When he deployed the second time, he daydreamed about fishing just to keep himself sane.

The night they called to tell me he was injured, I paced our back patio as I made phone calls and arrangements. His kayak was there in the back yard, its outline visible in the porch light. Each time it caught my eye I wondered, "Will he ever be able to go out on the water again?"

The days following my notification were filled with chaos. I left my home in the middle of the night a few days after he was injured. I just ran out the door with a suitcase and never lived in that house again. We were reunited at Walter Reed Army Medical Center in Washington D.C. When I got too far away from him, my knees went weak and I had to hold the wall for support. It was an interminable cycle of surgeries and recovering from anesthesia and pain crises. I wasn't sure that things were ever going to be okay, that we would ever live outside those walls again.

I was waiting for an elevator one afternoon with my friends who were there to support me. When the door opened we stood in stunned silence. Unloading from the elevator was a double amputee. Thrown over his shoulder was a kayak. A man. Two prosthetic legs. Carrying a kayak. In an elevator. In a hospital. In that moment, my friends and I knew that things were eventually going to be okay. My question was answered.

"He will be able to go out on the water again." We tried to convey the significance of the elevator kayak amputee, but Ollie didn't quite believe us yet. In those days, I'm not sure he believed in the existence of anything outside of that hospital room.

It was several more months before I dropped him off that foggy morning. There was a lot more pain, more surgeries, a cross-country move, a reunion with our children and several changes in living arrangements. He did not cope well with his necessary dependence on me and othersnot only was he mostly unable to walk, he couldn't drive, and even needed assistance in the shower. He was taking a multitude of drugs in order to tolerate the pain of having pins in each of his toes. Some of those medications made him insufferably belligerent. It was a dark, unhappy time for us both. On the fishing morning, he woke up with his alarm for the first time since the injury. He got himself up and dressed, then went to gather his fishing gear that he'd prepped the night before. Chad Hoover and his kayak fishing buddies hooked Ollie up with some rods, lures, a PFD and other goodies. He meticulously organized it all and sat waiting for me at the front door, his milk crate on his lap and his PFD thrown across the back of the chair. Resentment flowed out of himat the time I thought he resented me. Looking back, I think he resented needing me.

I dropped him off and as I looked up at him sitting there insolently in the van, my heart broke. My fun loving, independent clown of a husband was now completely dependent on other people to do...everything. He was emasculated, broken, and diminished. I wondered if this is how our lives would always be. At the time I failed to see the hope, though, in his belligerencesitting there with his set jaw and his eyes forward. He was angry; he was robbed of his independence. But he was going fishing, come hell or high water.

When I picked him up after lunch, the change in him was astonishing. He was no longer balled up in pain and anger. His body was visibly relaxed, his face broke into an easy smile. The cocky banter that I love, even though I pretend it annoys me, was flowing freely. While he was in the kayak he was able to move freely and gracefully again. When he came back that afternoon, he was confident. He felt like a man again. Just one morning on the water eased months of pain and anguish. That morning was the first time I saw my husband really return from the war – Heroes on the Water brought him back to our family, back to himself.

Heroes on the Water brought him home."

Should you find yourself moved to help with this worthy organization there is plenty of information available at www.heroesonthewater.org. They are a 501c3 non-profit organization and gladly accept donations as well as volunteers, but what Jim wants more than anything are connections to soldiers who need their help. If you know of a veteran suffering, whether physically or mentally, who could benefit from a relaxing day of kayak fishing, please give them a shout. These young men and women have sacrificed greatly to provide us with freedom and security, it's time we return the favor as best we can.