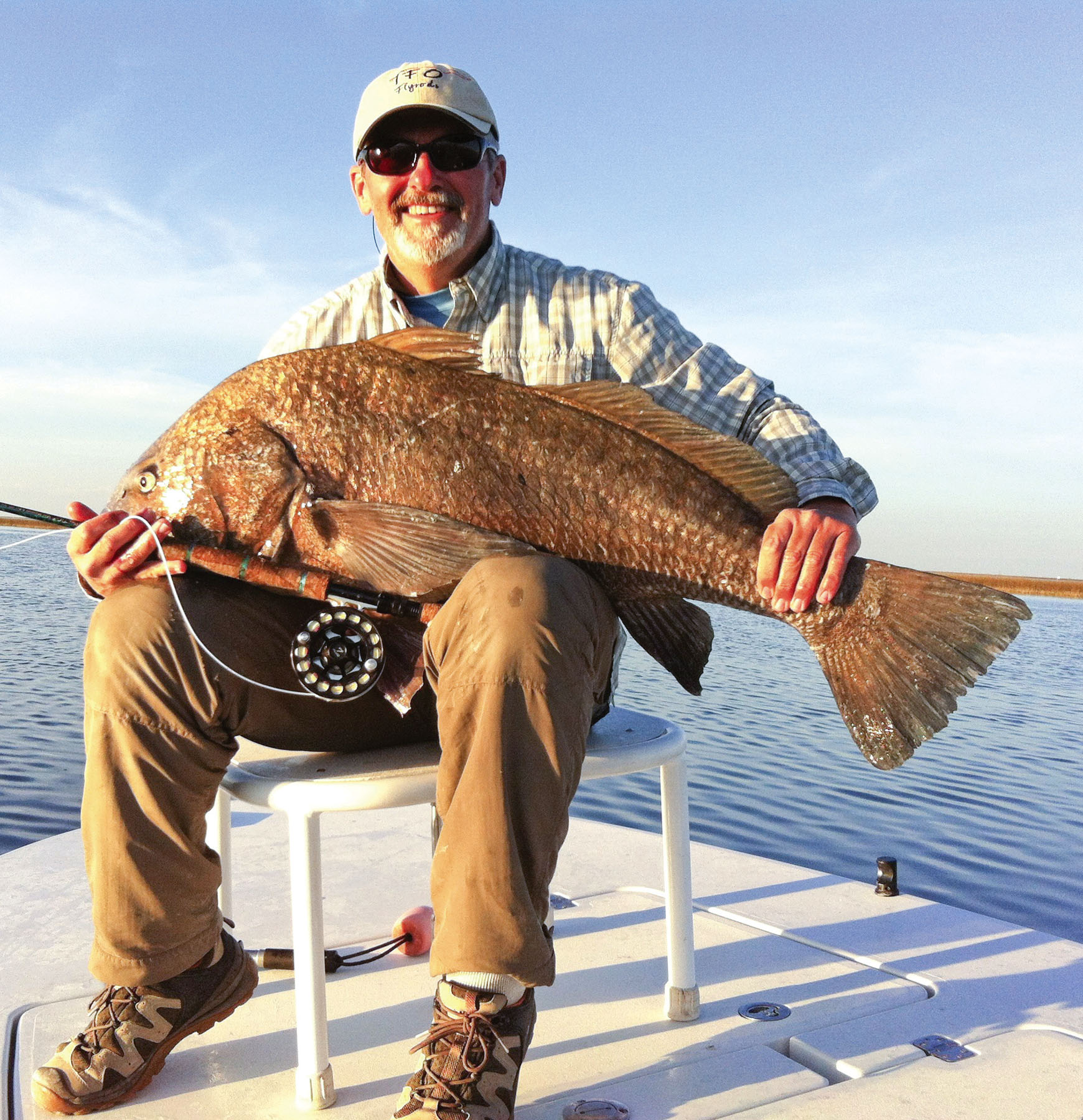 Shallow water sight-casting along the Texas coast seems to mean chasing redfish for most anglers. That's understandable I suppose. Redfish fit the bill quite well. They feed shallow, give away their location by tailing or pushing big wakes, readily eat lures or flies and they fight bigger than their size. All around awesome targets for the game and certainly one of my personal favorites.

But if you're limiting your casts to reds and passing on everything else you're missing out. For me, sight-casting is all about the challenge and being able to watch the fish eat. I don't care what kind of fish it is, if it'll eat my fly I'm throwing. I know some will turn their noses up at the thought, but I've even sight-casted to and caught some big hardheads. Why not? I release 99% of what I catch anyway. And if there aren't any better targets around I tend to enjoy amusing myself.

Think of all the different fish you see as you drift across a flat or pole through a marsh. Sheepshead, black drum, jacks, gar and even those unidentified dark spots that you know aren't reds. If I'm on the bow there's a cast headed in that direction. Not only is it a challenge to see if you can get them to eat, it's also really good casting practice for when that big red does show up. How many times have you stood on the bow for an hour waiting for a shot only to blow it because you weren't warmed up?

I see it all the time with my customers. It's a slow day (it happens) and the customer isn't into blind-casting. I'm seeing the occasional sheepshead or drum and pointing them out as possible targets. Nope, not gonna do it. If it isn't a red or trout they aren't taking a shot. Then along comes a pig of redfish happily rooting its way down the shoreline. Miss, miss, miss and...spooked.

I can fully understand if you don't want to cast to a hardhead or piggy perch, but why pass up a sheepshead or drum? They require a perfect cast, spook with the slightest provocation and are picky about what lure/fly they eat. They also represent themselves quite well once hooked and aren't too shabby on the dinner table if you're so inclined.

Alright guys, now that the snobby folks have turned the page it's down to just us fun people. I figure if you're still reading I should probably let you in on a few things I've learned about casting to so-called trash fish. First off, pretty much everything out there eats a shrimp. Second, most everything eats little crabs.

For the fly fisherman this is good news. Most popular flies used for redfish are designed to imitate a small shrimp or crab. The Redfish Crack fly I detailed a few months back can sort of look like either one depending on how it's tied and how you fish it.

For those of you using conventional gear the best thing I've found for catching drum or sheepies is a Buggs jig. They also work like a charm on reds. Buggs are flathead lead jigs tied like a fly using rabbit fur. When simply resting on the bottom the fur wiggles and waves like something that is alive. I've got a whole box of them in a variety of weights and color combinations.

Sheepshead are perhaps the toughest of the crew to catch on artificials. The good news is they're pretty common so you'll get plenty of opportunities. The bad news is they're spooky as all get out and you'll only catch a small fraction of them. I generally find them more agreeable from fall through the dead of winter. In the fall, as the shrimp are moving along the edges of the marsh grass preparing to migrate out, you'll see a lot of sheepshead right up against the bank. They'll be slowly working the shoreline poking their nose into the grass hunting the shrimp. I like to wait until the fish backs out of the grass and starts to move down the bank before casting. If you can drop a small shrimpy looking fly right on it's nose you can often get an immediate bite. A few inches too far away and they'll never see it, too close and they'll flee like you shot at them.

During the dead of winter I like to look for sheepshead along the edges of oyster reefs. They can often be found tailing just like reds as they poke around the loose shell looking for a meal. The hardest part is getting the fly or Bugg in front of their face without hanging up. I'll usually just wait patiently for the fish to move to the outer edge of the reef or over a clear spot. Drop the fake a foot or two in front of the fish's path and let it sit. As he gets close give it the slightest movement to get his attention. Do it right and he'll pounce, pinning it to the bottom, do it wrong and he's gone in a puff of mud. But that's the fun of it all. I've thrown to hundreds of sheepshead with the fly rod and only caught a handful. There's a reason they're known as the "Texas Permit" in fly fishing circles.

Black drum are just flat out weird. In general they can be found in the same areas as redfish. The smaller drum under 10 lbs tend to be the pickiest about eating artificials. Treating them like a sheepshead on a reef will sometimes work. The generally accepted fly is small and dark, same with a Bugg. However, last year I found myself in a large shallow pond on Matagorda Island that was loaded with 5 to 10 lb drum. I tried all the traditional methods and flies to no avail. On a whim I put a really small bright pink shrimp on. My first cast was to a drum headed straight at me. I was shooting for a spot about a foot ahead of him, but missed wide left. I knew I was toast so I stripped the fly quickly from behind the fish towards his head while waiting for the inevitable mud puff and fleeing wake. As the fly passed within inches of his gill plate the fish spun and hammered the fly. I figured it was a fluke, but tried it again on the next fish. Time after time it worked like a charm and I had a blast. I've tried it several times since then without catching a thing. Like I said, drum are weird.

At times some really large drum can be found way back in the marsh. It's not unusual to see these 20-40 lb fish tailing like crazy. These fish tend to be a bit more aggressive about eating artificials. Treat them like you would a tailing redfish with the only difference being the lure often has to pass within inches of their nose to get a response. It may take repeated shots, but it's worth it. A really big drum in shallow water can put up quite a fight.

Next time you're out there and the redfish have disappeared give these oddballs a try. You might just find you like the challenge.