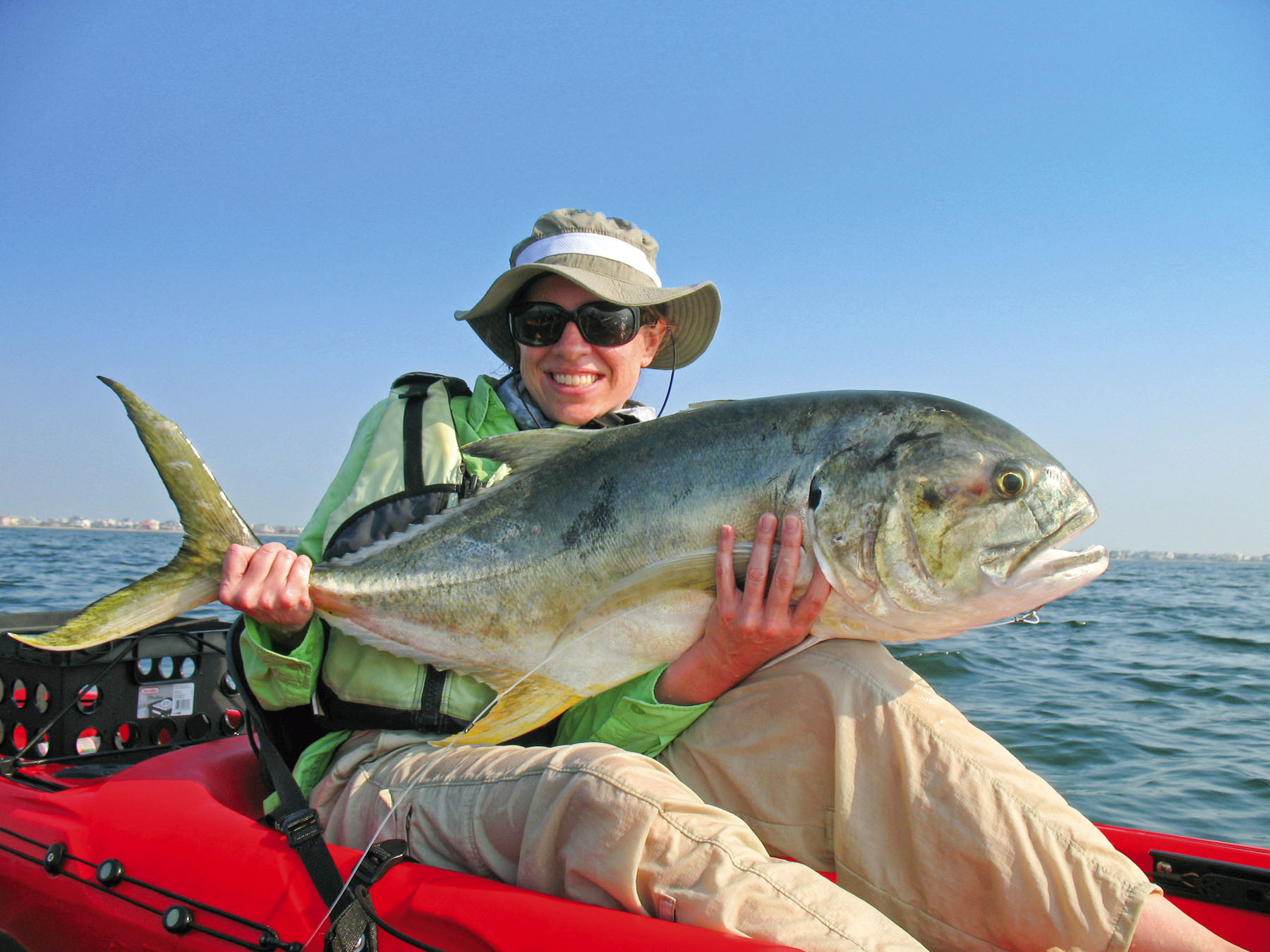 Jacks from a yak can be very interesting…long sleigh ride!
The pre-dawn coastal marsh mosquitoes were out in full force as I rushed through the launch sequence trying hard not to forget anything important. The hurried drill was in part to get away from the blood suckers, but more so because the incessant wind had finally stopped blowing. It was dead flat calm for the first time in a very long while and I couldn't wait to scoot out across the open water instead of ducking for cover.

Busting out through the Little Jetties the entire surface of Matagorda Bay looked like one large mirror reflecting the orange glow growing on the eastern horizon. Cade Simpson and his dad were aboard looking to hunt reds on the sand and grass flats behind Matagorda Island. Midway through the journey I shut her down. Cade and his dad stood to ask if there was something wrong. As I pointed towards what looked like a boat wake headed our way I replied, "Nah, just thought y'all might want to see this."

"What the heck is that?"

"Yep. Wanna have some fun?"

The guys looked at each other and shook their heads in agreement. Neither had ever tangled with a jack crevalle. This was just about the largest school of jacks I'd ever seen and they were pushing hard. As I tied on a couple large topwaters I told the guys to keep watching the school because they were about to run into a big school of mullet. Seconds later the collision of predator and prey exploded. Foot long mullet were flying all over the place with small packs of large jacks in hot pursuit.

Ready, set, go! Topwaters landed amongst the mayhem and drew immediate attention. The fish followed the lures slashing and missing all the way to the boat. One finally got a good bead on Cade just a few feet from his rod tip. Crash, zing, pop! It happens like that with jacks quite often.

The big school had now busted into several smaller roving packs. I bumped the boat ahead to intercept one of the schools as they closed in on another wad of bait. Pops launched his topwater ahead of the lead fish and got bit hard. The fight was typical of jacks, a big run or two and then settle in for a tug-o-war. All the while hundreds of the fish's buddies continued to blast bait in every direction. About the time it looked like the fish was done, he made one last surge and the line parted.

Cade, being the polite son, tried to hand his dad a freshly rigged rod for another shot. Dad looked at him like he was crazy and declined. Once again I bumped the boat in front of a school as it herded a pod of bait and Cade put the lure into the strike zone. Several raging jacks shoulder each other out of the way until one was able to surge forward and grab the topwater right next to the boat. A seriously cool eat.

Cade and this jack went round and round. Every time it looked like the fish was done he'd bust off another dogged run. The jack finally gave up and rolled on its side allowing me to cleanly snatch him up by the tail. Following high fives and photos the beast was released to thrill another angler.

The scattered schools were still terrorizing baitfish all around us. I asked the guys if they were ready for another one. Cade replied that the next one belonged to dad. Pops responded with, "Maybe we should go find some reds."

I really enjoy putting people on their first jack crevalle, yet among the sportfishing crowd jacks generally get no respect. Most anglers seem to consider them a nuisance, but I can't for the life of me understand why. Some will claim it's because you can't eat them. Nobody eats a tarpon, yet people spend countless dollars and hours pursuing them. They don't jump. Neither do bull reds, yet people spend quite a bit of time chasing them every fall.

I think jacks just need a better PR person. If you are into sightcasting it's difficult to summarily dismiss intentionally hunting for jacks. They feed aggressively, eat most any fly or lure with reckless abandon and fight well beyond their weight class. Even without the fight, just the aspect of watching one of these big fish chase down and inhale your offering is an awesome experience.

Jacks generally start showing in decent numbers once water temps reach the 70 mark and hang around until the cool fronts push them out. They can be found in the bays, along the beachfront and offshore. Locating them is a fairly easy task. Feeding jacks aren't shy. Large schools can be found crashing through baitfish sending them showering in every direction. From there it's just a matter of getting in position ahead of the school and keeping your cool long enough to get your lure in front of them.

In the absence of obvious feeding schools, jacks can often be found in smaller groups roving along the jetties and along the edges of flats within the bays. Most often these schools will show up unexpectedly and disappear just as quickly. They're difficult to specifically target, but you can usually get off a cast or two.

Another good place to look is behind shrimpers culling just off the beachfront. Jacks will often be there along with kings, sharks and the occasional tarpon. Many folks bypass the shrimpers working nearshore, but for those with smaller boats this can be a bonanza of sightcasting to big fish with either conventional or fly gear.

The less common encounter involves small roving packs or even single fish up on the shallow flats. Throughout the summer months while I'm stalking reds I'm always scanning ahead for the telltale zig-zagging wake of a big jack. I've seen it all up and down the coast, but it seems to happen more on the flats around Port O'Connor than any other area. I can generally count on at least a couple encounters a day if I'm paying attention. The shots are fleeting, but these fish are really revved up and ready to feed. The hardest part is getting your cast in front of them as they cut back and forth with no apparent destination.

I've had jacks eat most every lure you'd normally throw for specks or reds, usually because they just show up and you don't have time to change. But when I go hunting specifically for them I'll usually tie on a large topwater or some type of mullet/shad imitation. A medium-heavy rod with a little more line capacity than your standard bay gear is plenty for most encounters. When hunting them on fly gear I'll typically throw a large profile baitfish or a really big popper on a 10wt. A quality fly reel with a good drag and plenty of backing are a must for these hard chargers.

If you've never tussled with a jack crevalle I hope you give it a shot this summer. And if you're one of those who start cussing and trying to break them off when one jumps between you and your intended target, I hope you'll rethink why you go fishing in the first place. Quit taking yourself so seriously and soak in the awesome power of this great sportfish.