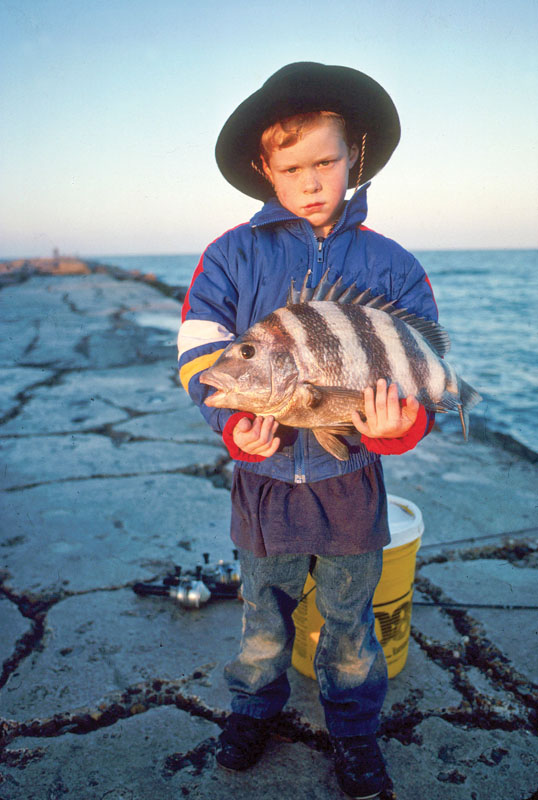 A happy young Ian Richard with jetty sheepshead during winter. Okay, maybe he would have been happier back home playing with Lego toys…

Jetty action on a mixed bag of sheepshead, black drum and redfish is pretty much a sure thing during winter, with a couple of caveats. Location and weather conditions are deciding factors.

Back in my Port Arthur days after hunting season, we had little to do on winter weekends with our small boats, except fish the jetties. We'd anchor, climb up on the rock wall with a 68-quart Igloo, and fill it mostly with sheepshead. Just strolled along and flipped lead jig heads tipped with shrimp, out about 10 feet. Ease that jig through the rocks until a sheepshead picked it up. Only about one-third of our strikes connected, thanks to the sheepshead's rock-hard mouth, but it didn't matter; we still loaded the box. Didn't even need ice, just dumped chilly Gulf water on the fish. Sometimes we had redfish and black drum, too.

By good fortune we lived near one of the three Texas jetties that are isolated from foot traffic, where a boat is required to reach these spots. A number of free boat ramps were located along the ship channel. Even in foggy weather we could launch and motor slowly along the line of rocks without losing sight of solid structure. There were five free boat ramps available in Sabine's ship channel, and two more a mile north at the Pleasure Island bridge. It was jonboat heaven for saltwater fishing, quite the opposite from Galveston's current situation.

The other two Texas jetties isolated from walk-in fishermen, and less fishing pressure, are on Matagorda Bay and then down at Mansfield on Padre Island. Matagorda Ship Channel jetty can only be reached by boat or airplane. Mansfield's East Cut jetty by boat or a really long car drive on the beach, something like 60 miles. All other jetties are hit daily by walk-in anglers, if the weather is tolerable.

Another factor is winter's weather, because you don't want to be out there when a black norther rolls in. Lives have been lost when winter fishermen dallied too long and a north wind caught them trying to cross open bay back to safety. Today's boats are bigger with more horsepower, so this hasn't been as much a factor in recent years. With the jonboat crowd, however, winter fishing on the bays is still touch and go. You don't want to launch and make a long boat run.

Here are a few basics and cautions to our winter jetty fishing:

If you walk the rocks, wear fishing gloves. If you fall, your hands take most of the impact–if you're fast enough to break your fall with them. Protective clothing and good shoes are a must. This is mobile fishing, so wear some kind of bait container on your belt. You obviously need shrimp or fiddler crabs, unless you're targeting redfish, where frozen mullet can be fished deep.

When guiding on the Matagorda Ship Channel jetties each winter, I preferred anchoring in 20 feet of water. That depth seemed to hold more fish. We fished straight down to avoid snagging, and I favored the two-ounce drop weights that would zip a bait down quickly. And could often be pulled loose when they did snag. Egg sinkers were useless. We'd bait up a #2 J-hook with a live shrimp and send it down. We caught a few reds and tons of sheepshead, keeping those that were four pounds or heavier. Smaller sheeps were released.

If I had a dime for every time I've dropped and retrieved anchors at the jetties, I could buy a ranch. I learned not to use an anchor chain, because they're impossible to retrieve when caught in a crack down there. Just find a used Danforth anchor and take your chances. Bring a spare, so you can keep fishing somewhere else. During summer, I used to snorkel the jetties and found so many anchors, I'd leave them up on the jetties for others. After taking my pick, of course. Some still had price tags on them...

Winter means mostly bait fishing, because fish are more sluggish and often down deeper. You will obviously need shrimp, to appeal to a wider variety of fish. Live shrimp is best, but I've found that decent frozen shrimp isn't bad. Back in the day we used to spot small, lone shrimpboats trawling nearby, and we'd brazenly stop them and ask to buy a pound or two of shrimp. Often they were small rock shrimp, which sheepshead are quite fond of.

Okay, so you want to try some of this winter fishing. Which day? First, find a tide chart and pick a day with high tide around mid-day. Then, hope for good weather. The best is a light southerly wind, even short-sleeve weather, probably with fog in the morning. Warm, green Gulf water helps. That's a day the fish will be feeding.

The slowest action would be during a sunny, high-pressure day, with a north wind cranking and a muddy, outgoing tide full of cold bay water.

Lots of potential out there, for an organized sport like Jacksonville's huge sheepshead tournament held each February for the past 20 years or so. I used to support the idea of such a tournament in Texas, but drastic weather changes here can wipe out a tournament day scheduled months before. Port O'Connor with its huge sheepshead population seemed like a logical place, but reaching the jetties across huge Matagorda Bay can be dicey, even life-threatening during a norther. Galveston harbor and jetties would be great, except Galveston Yacht Basin's boat ramp is now reserved for those who will pay a $1,500 membership. (No thanks). Anyway the last thing they want is a bunch of scruffy jonboats showing up. The remaining few ramps on Galveston's horizon are across big water.

Anyway, I'm quite fond of jetty fishing. It's a high-energy environment that makes the back bays seem almost comatose, by comparison. The sights and smells of marine growth on rocks, the constant slosh and flow, and knowing that so many fish are concentrated in all that rocky structureit all has quite an appeal. It's a great escape from daily chores and TV and constant news and Internet and texting and all that.