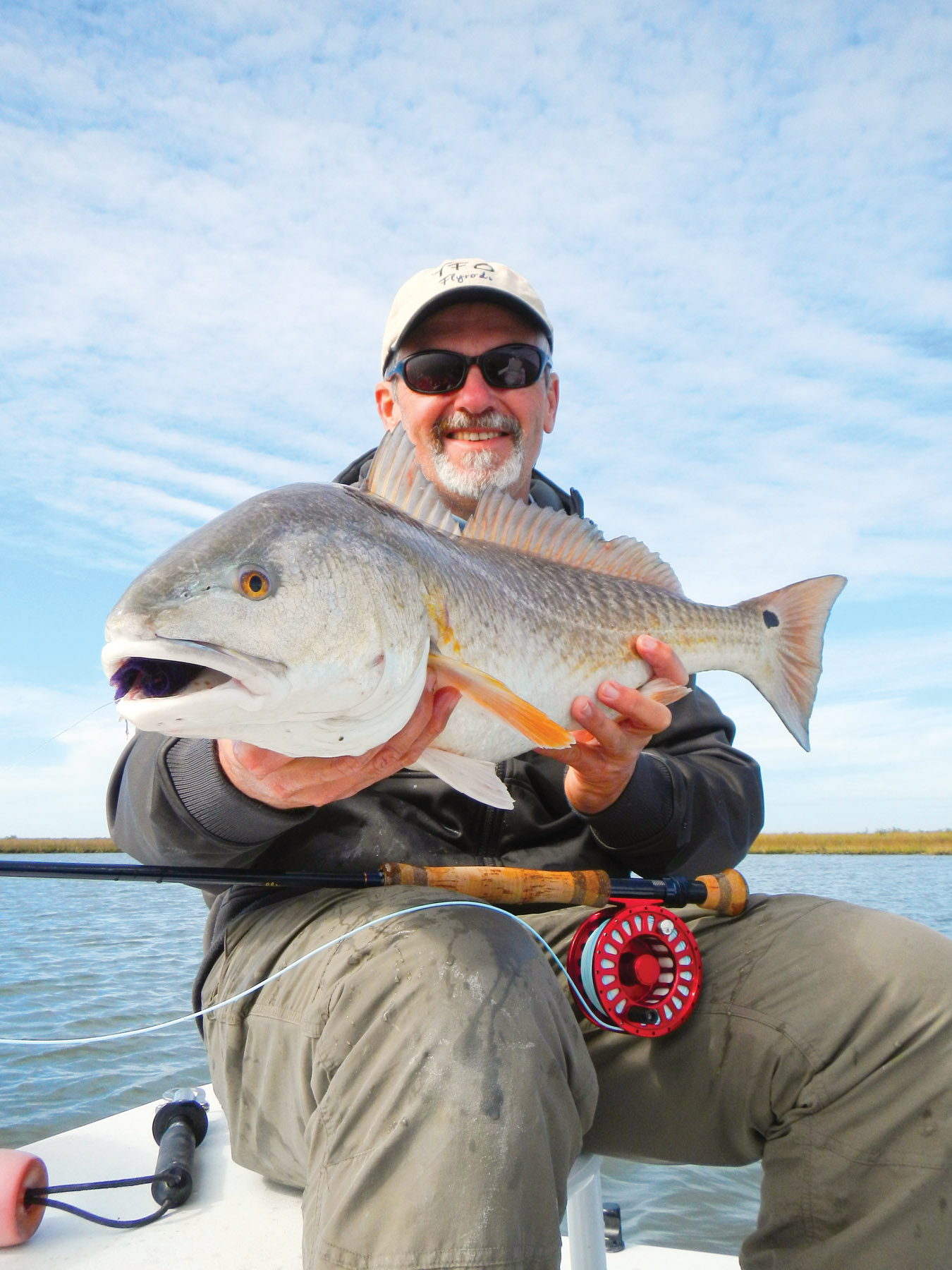 Yours truly with a “common” 15-pounder.

Each winter the past five or six years Ive been taunted by images of giant redfish sent from friends who prowl the delta marshes of south Louisiana. Photos of 20, 30 and even 40 pound reds held by guys and gals with silly grins and fly rods. Yes, I said fly rods.

A few years back when I was a sales rep servicing tackle shops I got to know a close-knit group of fly fishermen based out of Uptown Angler Fly Shop in New Orleans. These guys were telling tales of sight-casting to bull reds in the marshes of the Mississippi delta. At first I thought this was a fluke kind of deal. The more questions I asked, the more apparent it became that this was a fairly reliable fishery from November through February. I geared up to test it out any time I was in the area, but the unpredictable weather of the winter months always shut things down during my brief windows of opportunity.

With the advent of Facebook, the torture really ramped up. Being on the friends list of Captain Greg Dini, owner of Flywater Expeditions, will sometimes make you want to dump everything you own and move to Cajun country. Throughout each winter, fishing reports of multiple bull reds on the fly show up on my computer. Then along comes the unbelievable video Bulls on Top just to make sure the wounds remain open. If you haven't seen this video you can find it on Youtube, if you dare.

So when Jared Malone sent out a message that he was putting together a big group to go chase bulls I was quick to sign up. Twelve guys, five poling skiffs and four days in a big house near Grand Isle; nothing sounded wrong with that. I called my good friend and fishing partner, Jason Bryant to see if he'd like to tag along. Well, duh. The only issue being that Jason had not yet begun to fly fish. He had wanted to learn, but hadn't gotten around to it. Now he had a deadline. One month to go from training camp to the big game.

We got him set up with some gear and a couple casting lessons. He got the basics figured out, but I was still a bit concerned how it would play out on the water. Having guided plenty of beginners, Ive witnessed a lot of frustration as they try to plant the hook into their first redfish. The sight of a redfish in skinny water can often turn a good caster into a mess on the bow. On the plus side, hes an accomplished sight-caster with conventional gear so seeing reds wouldn't be a big deal. Remembering how to cast the fly and strip-striking instead of rod-setting, that could be interesting.

As the departure date arrived the weatherman appeared to be cooperating. After a solid week of overcast, cold and an overdose of wind; the forecast was showing a window of clear skies and light winds with temps creeping into the 70s.

We were rolling south on Hwy 1 by the time the sun creased the eastern horizon. Flags were hanging limp and the sky was clear. The closer we got, the faster I wanted to drive. It took a lot of restraint to slow down through the infamous speed trap of Golden Meadows. A few miles from redfish paradise we found winter. It got really ugly really fast. Stepping out of the truck at the meeting place was not very promising to say the least. A quick breakfast, a couple extra layers of clothing added and it was time to go exploring.

Jared had guided this area a few years back so he gave everyone a quick rundown on what to expect as well as a few areas to check out. As we cleared the channel and entered the open water my first thought was, damn this is a lot of water. It had looked large on charts, but seeing it in person made me wonder if wed be able to locate any good concentrations of fish much less the oversized bulls we sought to target.

The conditions were about as bad as they get for sight-casting. Thick cloud cover, winds blowing 15-20 and cold. We elected to start off blind casting with conventional gear to see if we could kick start the trip and start putting some sort of pattern together. It didn't take long.

I was on the platform poling down the first shoreline and Jason was firing off casts with a large soft plastic paddle tail when I noticed a large copper flash inside the mouth of a little bayou. Moments later Jason's drag was ripping and a submarine wake was headed towards open water. My 30 lb Boga was no match for this beast and bottomed out with a third of the fish still in the water. Not a bad start. High fives, photos taken and fish released. Then Jason says, that was fun, but I wish it had been on the fly rod.

It wasn't long before the fly rods came out and the casting rods were stowed away for the remainder of the trip. The rookie had his share of blown chances, but he wasn't giving up. Towards the end of the day we worked our way into a small lake and found a good many slot reds cruising the shorelines in less than a foot of water. As we eased up into a shallow cove a big tail pierced the surface. A few yards closer and the red came into full view, a solid eight pounder. He was nosing along the bottom looking for a snack when the fly plopped down right in his path. He ate without hesitation, Jason hit him with a solid strip-strike and the fight was on.

One of my favorite things about guiding is putting people on their first red on the fly, doing so with a good friend was even better. I know I caught several good reds that afternoon, but I don't remember much about them. However, I can close my eyes and picture everything that happened with his first.

Day two dawned partly cloudy with much lighter winds and the promise of increasing warmth. We went straight to an area where we had seen some big oversized reds the day before and started hunting. The fish were a bit sluggish, but most every one that offered a shot ate a fly. The sun finally started peaking out around mid-day and the reds went on the prowl. It was amazing how many really large fish we were seeing. The funny part was trying to guess size in the water. We were consistently light on our guesstimations by several pounds. When you aren't used to routinely seeing fish over ten pounds cruising through a foot of water its hard to wrap your mind around what your eyes are seeing.

We landed several solid reds as well as black drum (yes, the black drum over there readily eat flies), but couldnt break the twenty pound mark we had set as a goal. Jason was taking his turn on the bow and doing a little practice casting between fish sightings. He had just made his longest cast when a very large red appeared right in line with where the fly landed. The rook kept his cool and made a couple smooth strips to get the fly in front of the fish. One quick twitch and the bull crawled all over the fly. The eight weight rod was somewhat overmatched, but everything held together. The beast pulled the Boga down just past the twenty-five pound mark. Awesome.

The rookie had my personal best beat by a solid ten pounds, but I still had two days to catch up. Stayed tuned.