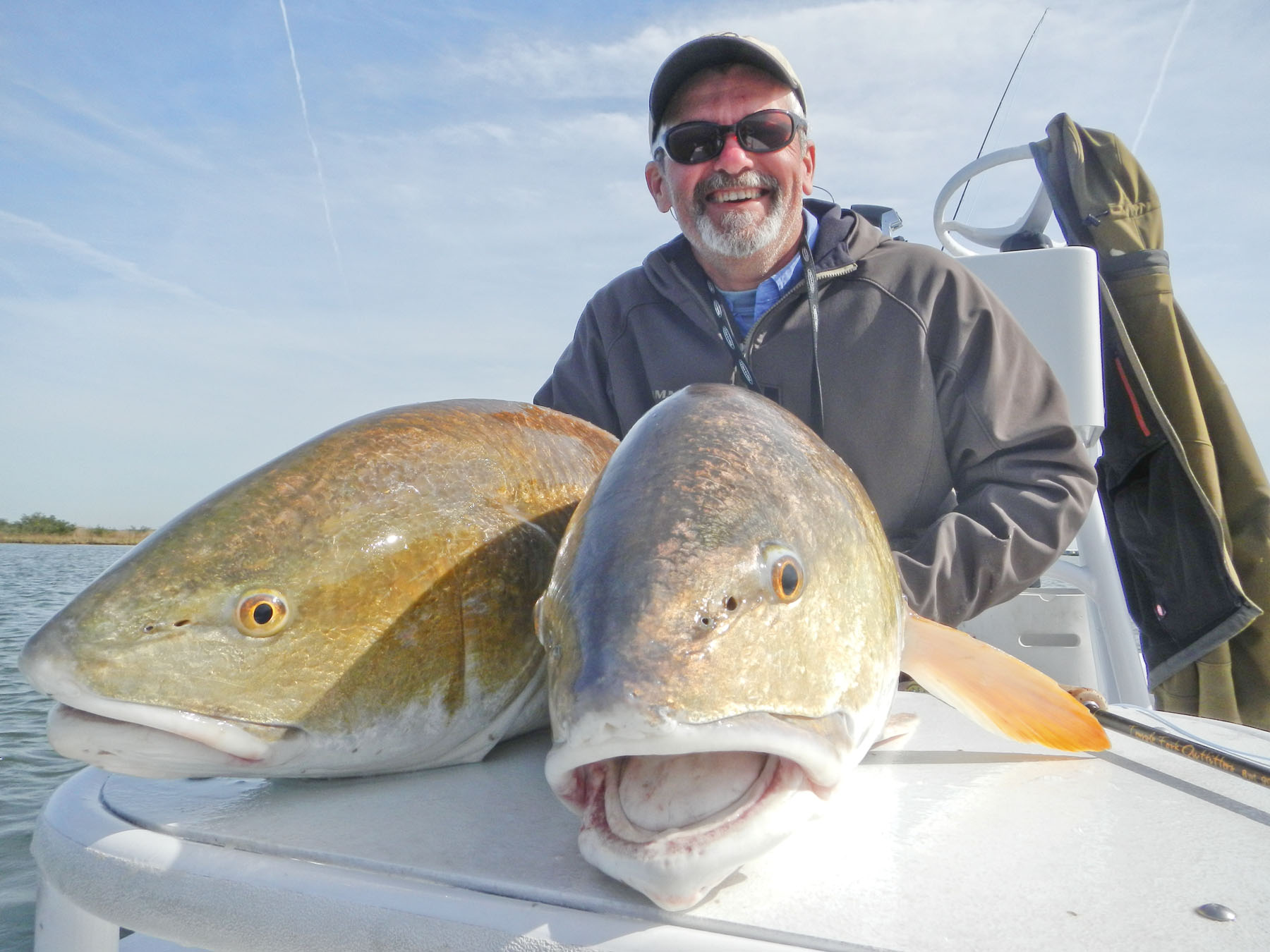 Twin twenty-three pounders!
A month later and I'm still grinning about that Louisiana marsh. While the first two days were good enough to make the trip successful by any standard, the final two days pushed it to lifetime memories category.

Day three dawned cool, cloudless and dead calm. Jason and I headed to some back lakes searching for some really shallow fish while the sun angle was too low to see into the deeper water. As the Fury settled off plane several large fish wakes scattered ahead of us. It's nice when you can just point to a spot on the map that looks good and the fish are there.

I hopped on the platform and Jason began a few practice casts to loosen up. Moments later I heard the familiar sound of a gang of reds munching their way down a shoreline. From my elevated position I could see the splashes behind a small grassy point and set the boat on intercept. A leading line of five or six reds rounded the corner with their heads exposed and jaws popping, followed closely by a couple dozen picking leftovers. The rookie kept his cool and laid a beautiful cast inches in front of the school. The lead fish surged ahead surfing with half his body above the water before inhaling the fly. Fish on!

As Jason fought the upper-slot fish I watched the rest of the school stop and begin milling about. Fish landed and photos taken; the rest were back to feeding within casting distance. Jason flung another cast and immediately hooked up again. I grabbed my rod and climbed back to the platform thinking I might sneak one in before they all fled. To my surprise there were dozens of reds all around the boat. We sat with the Power Pole down sight-casting to these fish for a good thirty minutes before those not yet stuck grew wise. This does not happen in Galveston.

Oh yeah, amongst the melee of feeding reds Jason also managed to snag a flounder on the fly. That made three species in three days for the rookie and he wasn't done.

We left the somewhat spooked school and went back to hunting. Not fifty yards later I spied a group of sheepshead nosing along a shell bank. Those who have stalked the wily sheepies with a fly know how hard they are to fool into eating fake food. I've cast to more than I care to mention and only managed a single landing on the fly. Jason's fly plopped down in front of one and gently settled towards the bottom. Two quick strips and he ate it without hesitation. I'm not sure if these Louisiana sheepshead are easier or what, but mark another species off the list.

By this time the sun was up enough to start searching for the big fish in deeper water. Arriving on our favorite flat it was my turn on the bow. The big reds hadn't decided to roll out of bed just yet and we ran over several that were lying motionless in the grass. I finally spotted one that hadn't yet spooked. The first cast was perfect. I twitched and danced the fly right across her nose nothing. My second cast wasn't so pretty as the line went right across her broad back. I cringed. Had this been a Galveston red the game would've been over.

To my surprise she didn't spook, hell she didn't even move. I inched the fly along hoping I could get off a redemption cast. The leader slid across her dorsal fin until the fly reached her flank. The big weighted fly then crawled up her side, over her back and was falling down the other side when the big girl erupted. She spun into a U and assaulted the fly like it was a pest. The strike was so sudden and violent it made me flinch. Somehow muscle memory took over and I managed to plant the hook. She was big, but still just shy of getting me into the twenty pound club.

Day three is pretty much a blur from this point forward. It was one of those epic days that come all too infrequently. The weather was perfect, the fish were eating and, other than boats in our group, there wasn't another soul in sight. We had set up a group text to stay in touch and clue each other in to any hot areas. Everyone was spread out over several miles and all day long the phone was buzzing with photos of brutish reds. There was obviously no need to gang up.

As the sun eased lower and things started slowing down my phone rang. It was Jared saying they were surrounded by giant black drum tailing!

I could hear some serious hootin' and hollerin' going on in the background. They were in a tug-o-war with a beast not far from us. We idled over and watched as it took two of them to drag the "big ugly" onto the deck. Jared's Boga sunk to 44 lbs. Huge tails were piercing the slick calm surface all around our skiffs. For some odd reason I grabbed an 8 wt instead of my 10 and dropped a fly in front of a finned behemoth. And it ate. The battle was like none I've ever had. It went on and on with the fish never getting more than twenty or thirty feet away, yet never really yielding to the pressure. I'd get it to the boat and it would waddle away. Jason made a stab with the Boga and started laughing because the jaws of the 30 lb Boga wouldn't open wide enough to gain purchase on those big ol' lips. Jared tossed us his 60 lb Boga and the drum was landed. The scale slipped just past the 40lb mark.

We parked the skiffs side by side and recounted the sunup till sundown action of what is perhaps the best day I've ever had on the water. I hadn't broken that twenty pound goal on a redfish, but we still had half a day left.

Our final morning we made a long run to explore an island that didn't work out so well. With only a couple hours left we returned to our big fish honey hole. Jason insisted I stay on the bow to get as many shots as possible. It sounds crazy, but I was being picky and passing on anything that was obviously less than twenty. A big fish appeared out of nowhere and I made a good toss. Fifteen pounds. Another showed, eighteen pounds.

With thirty minutes left I put Jason back on the bow. I had gotten my personal best, even if it wasn't a twenty pounder. Pods of mullet had started bunching up and nosing the surface all around us. We hadn't seen that throughout the trip and had remarked several times at how odd it was that we hadn't seen any of these big reds eating anything besides our flies. Then the world turned inside out. A loud crash occurred nearby and foot-long mullet showered in every direction. Moments later another pod got busted and the broad copper back of a red cleared the surface. Things just got interesting.

Before long mullet were flying all around us with huge reds in hot pursuit. I poled closer to one group and Jason got a shot, but no takers. I had my rod up on the platform and looked down to see a school passing the rear of the skiff. Three bulls keyed in on my fly and were banging into each other trying to get there first. The fly was just a few feet from the tip of the rod when the lead fish surged forward and I saw the fly disappear into her mouth. She turned and burned into my backing in seconds. Two more reds cruised beside the boat and I watched as one ate Jason's fly. Doubled up with bull reds on the fly and dozens more still crushing mullet all around us. I can't find words to describe the excitement of that moment. Somehow we orchestrated the landings of twin twenty-three pounders.

That would've been a great ending to a fantastic trip, but the bulls were still busting and we weren't leaving. The schools had moved up against the shoreline and as I poled back into the zone a monster redfish floated up just under the surface. Jason kept his cool and dropped a perfect cast in front of it. Strip, strip, strip...and then as if in slow motion the beast opened her mouth and flared her gills. The fly went in and Jason drove it home with a perfect hookset. Nineteen minutes later I latched the Boga onto her lip and felt it bottom out before the fish had cleared the water. Needless to say, she was huge.

On the ride to the ramp we agreed that we will be coming back...and we'll have a 60 pound Boga Grip.