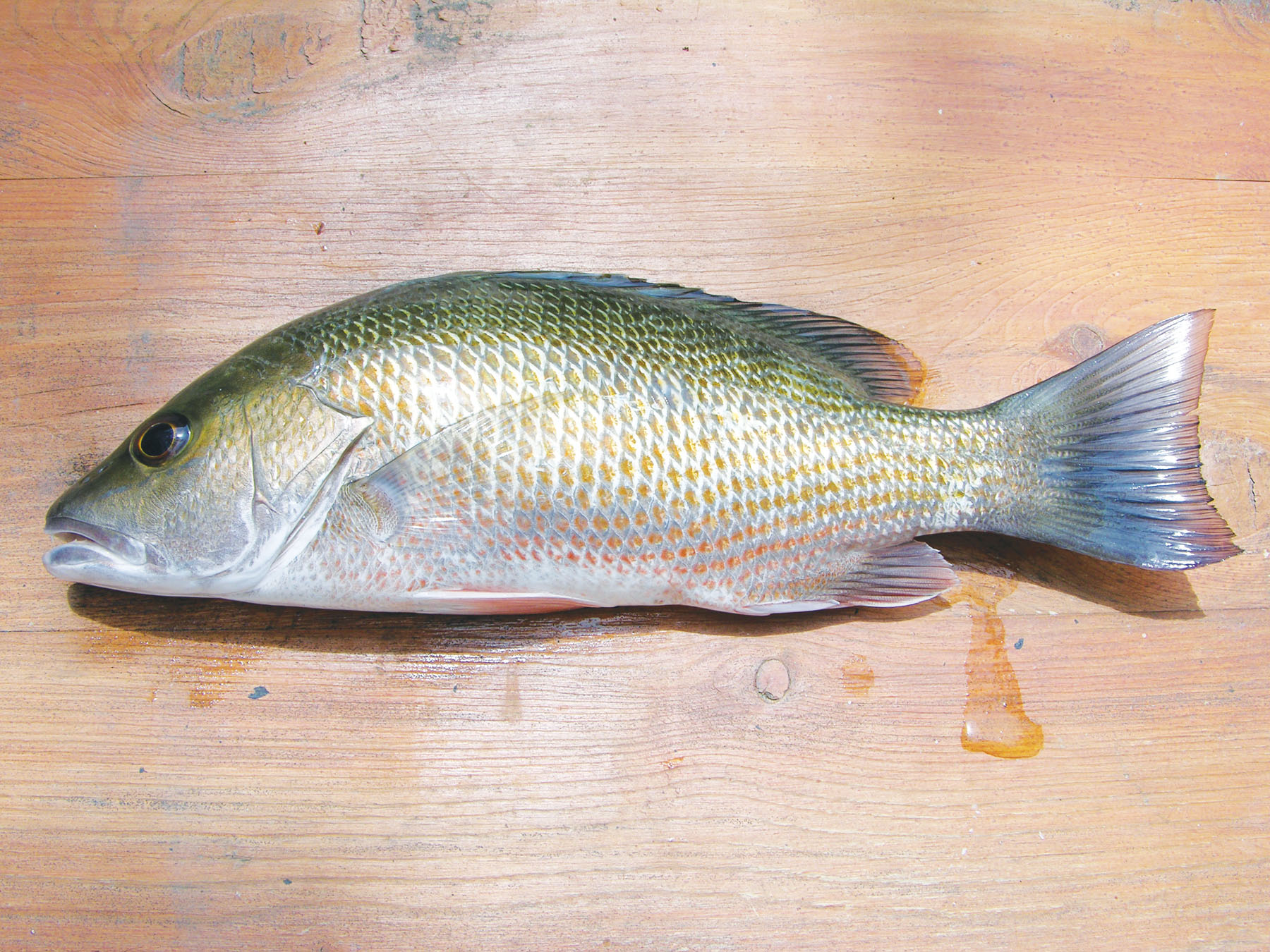 The Latin name given to the mangrove snapper is Lutjanus griseus which means gray snapper. The mangrove designation comes from the habit of this species to feed on crustaceans along mangrove thickets in Florida and the West Indies. Mangrove snapper are tolerant of a wide range of salinities and here in Texas they can found both inshore and offshore. Inshore habitat includes jetties, pilings, bulkheads and rip-rap. Their offshore habitat is reefs, wrecks and platforms.

Mangrove snapper have two prominent fangs near the front of the upper jaw. Their coloration varies; depending where they are caught, the mangrove snapper can have light green back, rosy sides, white belly and silvery fins. Another phase is darker with olive back, coppery sides, and dusky or coppery fins. Scale coloration is usually dark in the center with gray or silver at the margins. Adults of the species tend to be darker.

The mangrove snapper is often confused with juvenile cubera snapper, however the two can be distinguished easily by the shape of the tooth patch at the top of the palate. The mangrove has an anchor-shaped tooth patch while the cubera has a triangular-shaped patch. Another fish people get mixed up with the mangrove is the dog snapper. Though often similar in color, the dog snapper but has an obvious white triangular mark under the eye and a light-blue horizontal line also found under the eye. The teeth of the dog snapper are more prominent and two large canines can be seen even when the mouth is closed.

Mangrove snapper can be found on jetty rocks and other inshore structure; targeting them can provide options on days when the seas will not allow small boats to venture offshore. Offshore structure that normally holds red snapper can also hold mangrove snapper at depths of 60-120 feet and they make a good target for smaller boats on calm fall days, however, circle hook regulations apply in these areas. Platforms and pipe stands are great areas due to their bait-attracting ability and structure reaching from the ocean bottom to the surface. Wrecks and rocks usually get less fishing pressure which affords the small boat angler better opportunity. Rocks such as the Claypile and Heald Bank areas along with the Matagorda Liberty Ships are always good bets.

Mangrove snapper have keen eyesight and can be challenging to catch at times. I prefer stealthy rigging, fluorocarbon leaders, black swivels, and small, strong hooks of either live bait (inshore) or circle varieties (offshore.) An egg sinker of sufficient weight to take the bait down completes the rig. Free-lining live baits (no weight) also works for mangrove snapper when they are found higher in the water column. I always stress the need for strong hooks as you never know when a ling or king or even a bull red will take the bait. Mono of at least 30lbs strength is adequate and I would not recommend going heavier than 50lbs.

Last but not least, we need to talk about baits. Live finger-mullet, croaker, and live piggy perch work very well. Dead baits that make good offerings for mangroves are Spanish sardines and whole white squid. As for lures, try small bucktail jigs and spoons. Your rod and reel need not be very sophisticated for these fish but a few things need to be considered such as what if you do hook a large ling or kingfish. The rods could be either bait casting or spinning from 6 to 7 feet rated for 15-30# line. Suitable reels would include the Daiwa Luna 300 or Shimano Calcutta 400, and in spinners, the Shimano 8000 Stradic or Daiwa Saltist 4500H.

Strong fighters, mangrove snapper offer a great challenge on medium-light tackle and make excellent table fare. The really neat thing about mangrove snapper is their tendency to school by size and their loyalty to structure; getting on a bunch of 10-pound class mangroves is a hoot. I cannot stress enough the importance of stealthy fluorocarbon leaders and small, strong hooks. Bait variety can be critical, I like to include several species in the livewell as mangroves can be picky. Anglers seeking red snapper often get the impression there are but few mangroves on the structure they are fishing but a switch to stealthier rigging will often prove otherwise. An accidental fish or two is signal enough that they are there in greater abundance and just not willing to hit baits on 80-100lb mono leaders. My personal favorite way to catch mangrove snapper is free-lining small live baits and whole white squid.