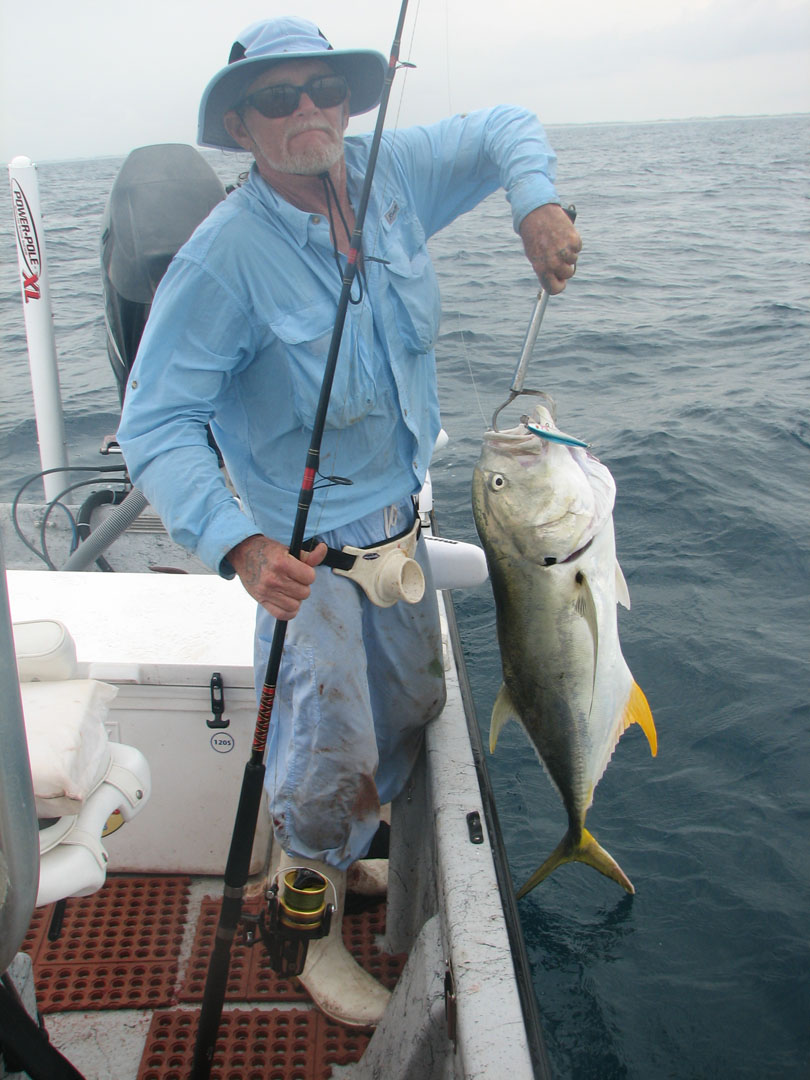 Capt. Billy with jackfish on light spinning tackle.
I grew up fishing for tarpon; landing my first at the ripe old age of fourteen. That fish measured a bit longer than six feet and upon returning to the farm I ran inside very excited and told Mama about this most grand of creatures I had caught.

I'll never forget the way she glared at Papa, "You have absolutely ruined this boy," she said.

Papa shook his head, "Nah, not this one, Hazel; don't make no difference with this boy. He ain't never goin' to do nothin' but fish anyway."

Turns out that Papa had me sized up pretty good. And, if there was ever a single word that could make my heart jump every time I heard it over the past forty-nine years it would be tarpon. It had already been that way for a couple of years when I caught my first one.

Although we occasionally see and hook tarpon during the summer months, the window of opportunity for surf fishers to have any reasonable chance to encounter them in the Coastal Bend of Texas is really quite small. Typically, prime time starts around September 10 and continues through October when large numbers of mature tarpon migrate along our shoreline on their way to the Tampico area for the winter. The desire to pursue them more productively and for a longer period each year was the main reason I bought the panga and rigged it for nearshore fishing.

While we've been having some really fun and productive days fishing nearshore and finding success with a variety of species, as of this writing the tarpon haven't arrived in our area yet. They are in good supply at Port O'Connor and farther north and hopefully if we can get the right conditions between tropical storms and hurricanes we should be at them hard and heavy soon.

The panga has thus far been all I have ever wished for in a boat. It's sure been a blessing this year as surf fishing has been off ever since Hurricane Dolly. There is a genuine feeling of correctness and pleasure that overcomes me as I cruise through crystal-clear water filled with various species of fish. The best part of the picture is that we are within sight of the beach and quite often without another boat in sight.

The nearshore fishing experience instills a sense of freedom much the same as I enjoyed on the PINS beach before it was discovered by the internet fishermen and the rest of the crowd you find there today. To an old beach rat who long ago tired of crowds, murky water and poor catches; sightcasting from the panga to ling, Spanish mackerel, kingfish, Atlantic bluefish and jack crevalle with fly and conventional lures seems like paradise. And I'll tell you right off that this butterfly jigging is not only extremely productive but it is a genuine hoot. I have entered a brand new world with so much to explore and learn, theories to prove, and techniques to check out and fine tune.

To ease up to a location and see 15 or 20 ling from 35 to 60 inches in length slowly cruising on the surface ready to accept any offering is a wonder to behold. To start chumming and within minutes have hordes of king mackerel in the slick is the equivalent to being a child looking at gifts under a Christmas tree.

I wonder how many people actually indulge in the high-adrenalin activity of casting large topwater lures to kingfish. This is quite possibly one of the most overlooked of nearshore angling thrills. The huge explosions and the sight of a 20-pound plus king rise from beneath a topwater lure and then jumping fifteen feet into the air with the lure in its mouth will burn deeply enough into your memory to last a lifetime.

There are simple pleasures available as well. Hooking up to and chumming from a nearshore platform often leads to a scene that makes one think he's watching the Discovery Channel. Hundreds of large spadefish, juvenile amberjacks and triggerfish rise to the surface as a hundred large jack crevalle and other species swim in a slow circle deeper in the water column.

The challenge of pulling a four pound spadefish to the surface and keeping it out of the platform on light spinning tackle has to be experienced to be believed. When one considers that this is a delightfully delicious fish with no bag limits it becomes an added bonus. The old saying, "So many fish; so little time," has never seemed more appropriate than it does fishing nearshore and in the surf during the fall.

There are many possibilities we haven't even began to experiment with yet in our nearshore adventures. Species such as the Florida pompano are certainly present right now but will have to take a backseat to the exciting gladiator species. Redfish will become very common as will huge shoals of little tunny and jack crevalle. These will attract sharks in the greatest numbers and largest sizes of the year and in the fall we'll be live-lining both species for massive sharks. The cooler months are the time for catching large mako sharks and we will target them throughout the winter and spring. It requires near ideal water and weather conditions in the surf to be successful with pompano and speckled trout but they should be more readily available just outside the surf line. I've not mentioned red snapper in state waters with higher daily bag limits and year round open season but we all know they're out there and I'll be available for targeting them.

I love to fish. I don't fish to make money. I fish to fish. It's who I am and what I do. What a wonderful treat to be able to fish for trophy trout in Baffin and the Upper Laguna throughout winter and spring in a seaworthy boat and not have to worry about rough bay crossings to reach protected fishing areas. It's just absolutely too cool and just about as good as it gets when you throw in the surf to boot.

I'll be seeing ya' nearshore, in the bay, or on the sand.