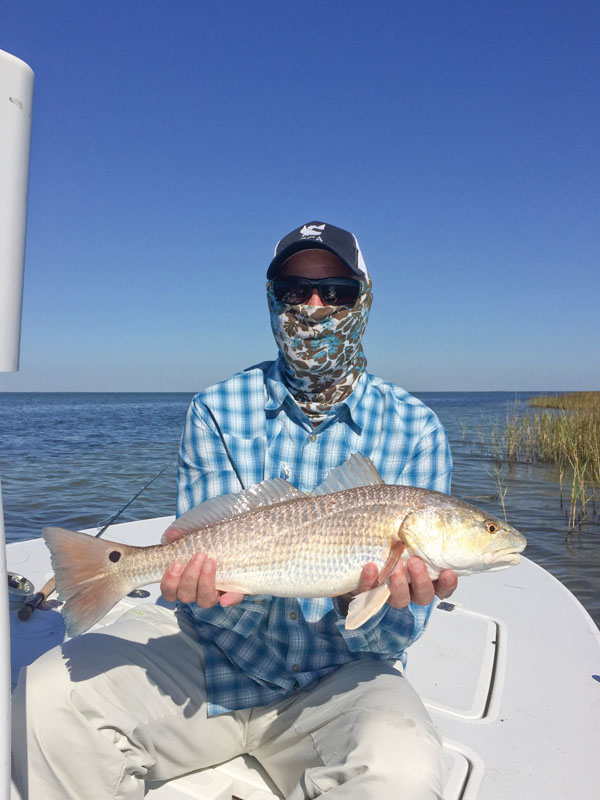 Every morning I leave the dock I have a plan. Most days Plan A works out, others I might need to explore Plan B. The best days are when I can turn the engine off, start poling and never turn the key until it's time to go in. Then there are days like today when I go through the whole damn alphabet and wear the starter out. To be honest, I knew the plan was a crapshoot given the conditions. It was a bright full moon, dead calm after several days of high winds and almost no tide movement until later in the day. It's also duck season, better known as airboat season when every shallow water redfish needs anxiety meds.

First stop was a grassy shoreline where I'd been finding some roaming schools. The recent wind had pushed tons of bait into this area and they had taken up residence in the flooded spartina grass. The firm bottom with plentiful seagrass had managed to hold clear enough for sight-casting. Right off the bat we were seeing reds and it looked like my doubts were wrong. That is, until we tried to feed them a fly. No dice. Fish after fish either snubbed the offering or fled the second presentation. It was hard to leave given the numbers of fish but, you can only beat your head against the wall so many times before you must admit it just isn't going to work.

The next spot I wanted to try was a series of small marshy back lakes where I'd found scattered singles recently. I knew the water would be a bit murkier due to all the wind so I wanted to give the sun a little time to get higher for better visibility. To kill a bit of time, we looked at the edges of some guts and drains leading to the lakes. Nope, no fish there.

On to the lakes. The fish were there, unfortunately the water was a lot more messed up than I had figured. Tough to get a good shot when you can't see the fish until they're scooting from under the bow. We pressed on for a bit and got a handful of shots at suspicious swirls and wakes. One of those turned into a healthy eat, but the surprise of an actual bite on such a slow morning led to a slightly delayed hookset. Oh well, it at least inspired a little optimism. That bite probably kept us in there longer than it should have. Again, hard to leave fish to go find more fish but if the situation is such that you can't catch them then it really doesn't matter how many are in there. Had we been throwing conventional gear I think we might've mustered a decent tally while blind casting. That's not what my guy signed on for so it was time to try something else.

On a hunch, I headed for a long shoreline that had been protected from the north wind. The bottom was hard sand with scattered grass. As I had hoped, the water was crystal clear. With the dead calm conditions and bright overhead sunlight, we could see fish at quite a distance. My customer can toss a fly further than average so my hope was we could get something in front of them before they got the idea we were there. The good news was there being some really big redfish scattered around the flat. The bad news was we couldn't get anywhere near them. It got to the point we were joking that they could tell when we were looking at them.

Lucky for me, this is one of my more regular customers who truly does just enjoy time on the water. He's fished his whole life and understands that there are days when it just isn't working. He also appreciates how hard I was working to try and make it happen for him. These fish really had me puzzled. They were obviously up on that flat feeding; we could see them chasing bait. But no matter how quietly I eased toward them they'd spook like we were popping caps at them.

The answer came buzzing along. An airboat riding ten feet off the shoreline. There was absolutely no reason for it. The open bay was slick as glass. He came all the way up to me from behind, swung out a way to go around and then went right back to the shoreline not a hundred yard past me sending redfish wakes in every direction. Somehow my customer sensed my unhappiness and suggested we take a break.

After I'd relaxed and cleared my mind of the things I'd like to say to the airboat driver, it was back to work. I've got some tiny lakes off this flat that go overlooked by most folks and aren't on the airboat runway. Maybe some of those spooked reds had found refuge in there. Bingo. Feeding fish in the saltgrass. There weren't many, but we at least broke the ice and got to grip-n-grin a few. The downside to that little plan was just that, it was little. Didn't take long to work them over.

Well if those guys were eating maybe my thigh deep mud hole would work. This spot is off the beaten path and due to the muck bottom it stays dirty most of the time. The reds love this place, but unless they're active and feeding you'd never know they're in there. Counting on some tailing fish I made the run. Three hundred yards of hard poling, no dice. Dammit.

We were way past quitting time but I was determined and he didn't have to catch his flight until the next day. We had time for one more shot before the sun got too low to see fish. I had three hundred yards of poling back out to think about it. The first shoreline of the day had held the most fish. They hadn't been super spooky, just not willing to eat. Now that the wind had picked up just enough to ripple the surface and we had seen feeding activity with some other fish, it might just work out better this time around.

I won't lie and say we slayed 'em, we didn't. But what did happen was we finished the day getting legitimate shots at feeding fish and got to watch them eat a few flies. Success isn't always measured in numbers, sometimes it is found in the satisfaction of sticking to it and figuring it out.