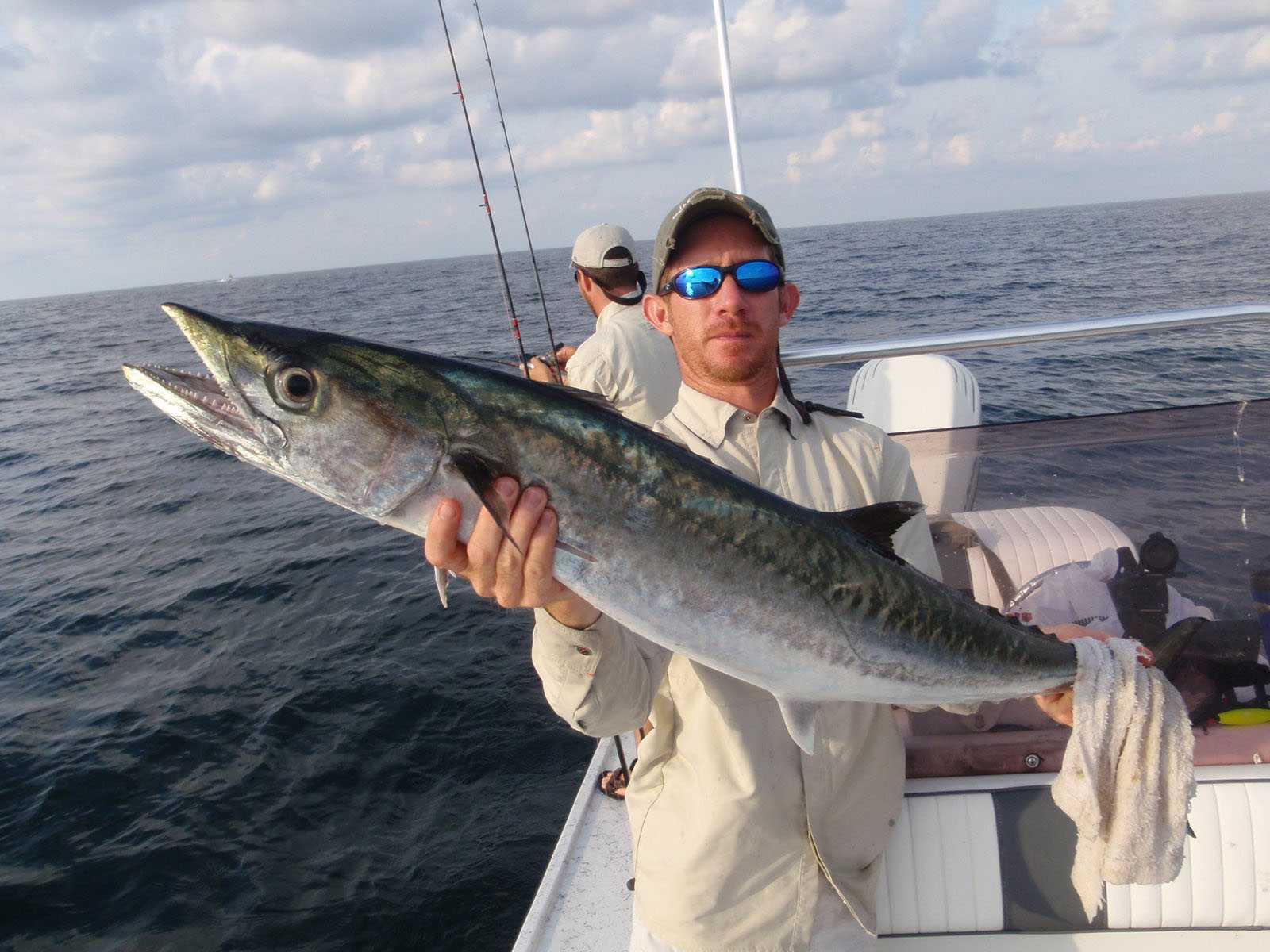 Mark, his son Edward and I decided to head out to the POC jetties early Saturday morning to see what we could find. We arrived at the end of the jetties before the sun broke the horizon and bait was already getting busted up all over. It was a beautiful and calm day. We checked the current and anchored the boat where we could cast towards the rocks. We were fishing with our everyday trout and redfish tackle. I was using a Shimano Citica and my friend and his son were using Quantum reels of similar size.

Shortly after anchoring, tarpon started to roll around us. That got our blood flowing and we immediately changed lures to anything we thought might trigger a bite. I decided to switch to a shallow water diving lure and got hooked up but it came off after a brief fight. Mark hooked up and broke off. We knew we were in big fish then.

I hooked up again and this time managed to fight the fish in. It was a kingfish hooked in the corner of the mouth. We were somehow lucky enough to land the fish with only a fluorocarbon leader. We quickly took a couple of pictures and let it go.

We had no wire leader with us on the boat so we cut up some popping corks and used the wire to fashion leaders in the hope that we might land more kings.

The kingfish were nailing our lures aggressively. We had a couple that morning that actually jumped clear out of the water with our lures clearly visible in their jaws. We ended up landing one more kingfish Saturday morning and lost most of our trout and redfish lures hooking up with the kings. It was worth it, though. I want to tell you it was very exciting catching kings with our trout tackle.

We decided to make a run to the tackle shop that evening and restock our lures and hopefully get some light leader wire to increase our odds. We were hoping we could repeat the successful trip.

We picked up a bunch of inexpensive topwater lures along with some shallow divers and the thinnest wire we could find. We ended up with 33# wire. We rigged up several of our lures with a 10-12" length of wire attached to the split ring and then completed it with a haywire twist to a small barrel swivel at the other end. The only modification to our tackle was the wire leader. We were ready for Sunday morning.

Anxious for another bout we got another early start Sunday. We arrived at the end of the jetties before dawn and positioned the boat. We decided to throw topwaters. We made sure not to work our lures too close to the boat as we didn't really want them flying in the boat with us. Mark started casting his topwater a few times before we had much light and I told him maybe the fish just can't see it yet. The second I said that, a kingfish rocketed out of the water nearly 10 feet and made all our hearts jump. It got off. We all started casting. Another one nailed Mark's lure and got off again. We soon discovered that the kingfish were destroying the split rings and pulling the hooks from the lures we were using.

Edward, Mark's son, had a fish explode on his lure and it also pulled off. I continued to cast and received another explosion. Again, this kingfish took flight, leaping nearly 10 feet out of the water. This is pure excitement and this time the fish remained hooked. We landed the fish safely, got some great photos and then let it go, all before the sun broke the horizon.

We decided we needed to beef up our rigging and switched out the split rings and hooks on a couple of the lures since we were loosing so many fish. This proved to increase our landing success. We continued fishing with topwaters as the sun started peeking up over the water. A kingfish nailed Mark's lure and went flying less than 30ft away from the boat before it landed with an exciting splash. Our adrenaline was pumping.

Mark hooked up again and this one decided to take off. Expecting we would probably have to chase some of the fish, when we set the anchor we tied a bait bucket to our anchor rope so we could let the anchor go quickly. We had to chase this one. We quickly let the anchor rope go and gained some line back for Mark as the fish was very close to spooling him. The kingfish put up a great fight and we landed it snapping several nice photos and releasing it unharmed.

We returned to our spot and got the anchor line re-tied. I decided I wanted to try a diving lure and the first cast brought another instant hookup. This fish decided to run for the beach. Mark and Edward scrambled with the anchor chores and got the engine cranked. We caught up just in time.

Mark made a cast as I was fighting this fish and he also hooked up. We were dancing around the boat to keep the fish out of each other's lines. We landed both fish and got some more photos. We continued this pattern of fishing for over an hour and released six or seven nice kings (hard to keep track in the excitement) before the bite started to slow.

We pulled the anchor and began slow trolling with the diving baits about 30 feet behind the boat. Almost immediately, the kings found us and were fighting to get at our lures. One would slam the lure and miss and there would be five others to take its place. The water was beautiful. You could see the kingfish come up and nail the lures. All three rods started screaming. We grabbed our rods and managed to land one of out of the three.

We continued trolling and had a fish hit an outside lure so violently that it cleared both the other lines being trolled and landed on the other side of our pattern; unbelievable fun.

We had our best, most exciting topwater bite of all our past fishing trips and hope to be fortunate enough to repeat the trip in the future. Before we decided to call it quits, we landed close to 15 kingfish that day and lost many more during all the crazy double and triple hookups. All were released healthy and ready to fight another day. Not a single one had a hook in its throat.

Catching kingfish on our trout tackle and enjoying the great fight they gave us, along with being able to release them unharmed, gave us a thrilling and a most enjoyable trip. We left Port O'Connor with great respect for such an awesome gamefish.