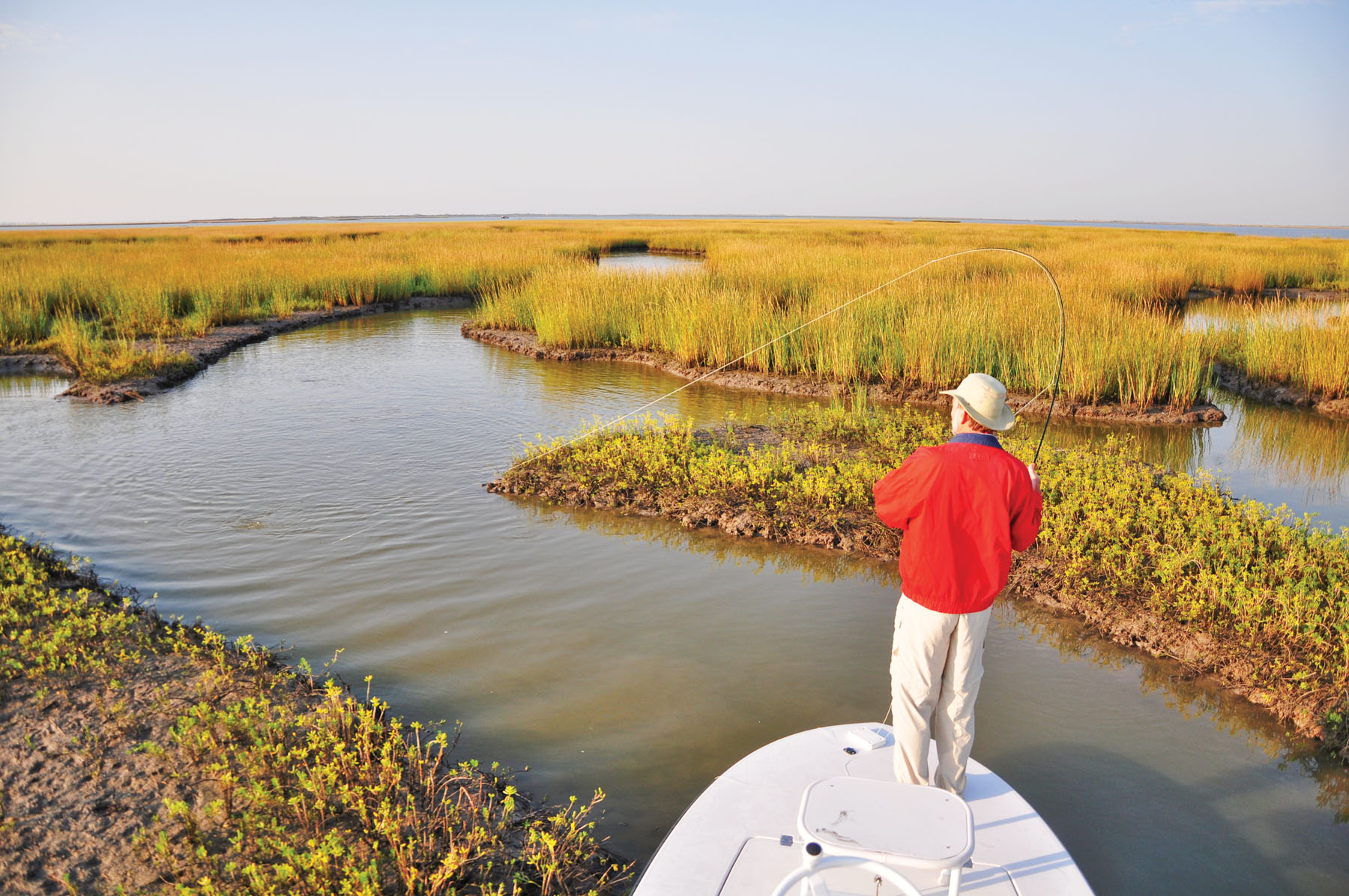 The late fall morning dawned clear and cool. The wind from the recent front had subsided and the water levels had returned to normal. As is often the case on the upper coast, the chilled water had cleared allowing some of the best visibility of the year. Shutting down the big motor we could hear the reds crushing lesser critters deep in the marsh. My customers were dedicated open-water trout fishermen who had booked with me to see what all this redfish hunting was about. These guys had plenty of salt in their veins and their well-worn quality gear boosted my confidence for a great day.

The reds had been feasting on small shrimp that were still hanging out in the edges of the cord grass. I rigged them up with a couple light-colored Buggs jigs and jumped up on my poling platform. As we eased through a small bayou towards a shallow lake the guys stood anxiously on the bow. Knowing we were nearing the fray, I went over the best way to present the lure. These fish are bumping the grass edges and mud bottom looking to dislodge a shrimp for a quick and easy snack. Last month McBride mentioned the term metabolic cost and it certainly applies here. Theyre not going to waste much energy chasing down such a small piece of food. In this situation their cone of attention is fairly small so the lure needs to be within a foot of their face. If you miss the mark they wont chase it so just burn it back in for another shot.

The guys nodded their heads to let me know they were taking it all in. A few minutes later we slide into the lake. From my elevated vantage point I see a pod of reds prowling the edge.

Three reds at one oclock against the shoreline cruising left to right. Yall got em?

Good, drop it against the bank a foot or so out front of the lead fish.

The next few moments involved a flurry of errant casts, cursing and finallythree large wakes fleeing past us and down the bayou we just left. The rest of the morning was like a broken record. Too far out front, too far behind, short, long and hung in the grass, hit the fish on the head. You get the idea. Luckily these guys had a great attitude and were enjoying seeing reds do things theyd never seen before. They were also lifelong fishing buddies and the ribbing reminded me of trash talking your buds over the misses in a dove field. Eventually we found a few reds that were either very aggressive or mentally deficient enough to attack a lure that landed in the same zip code. As we parted ways at the dock both assured me they were coming back, but first they were going to practice their casting.

Sight-casting is a game that requires some cooperation from Mother Nature with her blessing of favorable conditions. She doesnt always want to play fair and even when she does, the fish sometimes dont get the memo. While these things you cant control make it frustrating, we dedicated sight-fishing anglers learn to deal with it and do the best we can. The real frustration comes when the conditions and fish cooperate, but we cant close the deal due to our own deficiencies.

I see it all the time. The majority of saltwater anglers are more interested in how far they can cast than hitting a specific spot. Its understandable because in most situations it is more important to cover as much water as possible. Sure there are targets; you want to hit that raft of mullet or the edge of a slick. That is far different from quietly dropping a jig into a dinner plate-sized area ahead of a moving fish from a moving boat while playing the wind. Getting good at it requires practice. I often equate what I do to bow hunting. Were stalking through the area hunting for a redfish. Once located youll often only get one shot. You wouldnt wander off into the woods with a bow having not loosed at least a few arrows into a target, so why not spend a little time practicing with your rod and reel?

Back when I was a sales rep with Shimano I spent a great deal of time hanging out at various events manning a product display. Often times it was a tournament location and there werent a whole lot of lookers until the crowds started showing up around weigh-in time. Id pick up a rig and start tossing. Id throw from a variety of angles and work on hitting whatever was handy. Over time I got to a point where I was dropping a practice plug into a coffee mug nearly every cast whether it was underhand, overhand, from the right or left side. When I hit the water the game was a whole lot easier. Having confidence in a variety of casts let me choose the best angle for whatever direction the fish presented.

The best part of casting practice is that you dont need a big space or any special equipment to get it done. Theres no need to head out to the driving range to hit golf balls or worry about an errant arrow ending up in your neighbors fence. Take an old jig head, clip the hook off and start tossing it around the yard. If you get inspired, scatter out some paper plates at different distances and make a game out of it. With just a few minutes here and there youll be surprised how easy it is to up your game.

This isnt limited to conventional gear. Fly fishermen tend to spend a bit more time practicing their casting simply because a good casting stroke takes some time to develop, but even the fly guys get hung up too much on distance. Most every saltwater fly fisherman I talk with knows how far they can cast and theyre always striving for more. While its great to be able to toss a fly eighty feet when needed, it doesnt do a bit of good if it touches down ten feet off target. I much prefer to have a customer standing on the bow who can consistently nail a forty foot cast over one who can throw into the backing with no clue where its going.

I turned my fly casting practice into a game by scattering half a dozen aluminum cans around the yard and hitting them with an old fly I had clipped the hook from. The pleasing tink of a hit was like a kid shooting a BB gun. Id start off fairly close and had to hit each one in succession with a single backcast. Once done, Id move back five steps and do it again.

My neighbors gave up making fun of me years ago, but if youre not up for practicing in the yard you can get in some practice every time youre out on the water. Next time youre out there just blind casting, try picking out a small target. Bubbles, pieces of floating grass, a crab trap buoy, or whatever else you see. Make every cast count and then when you do see that big ol red cruising by youll be much less likely to choke. Its a lot more fun watching him inhale your lure than it is to stand there helplessly as you watch him throw up a rooster tail while heading for the next county.