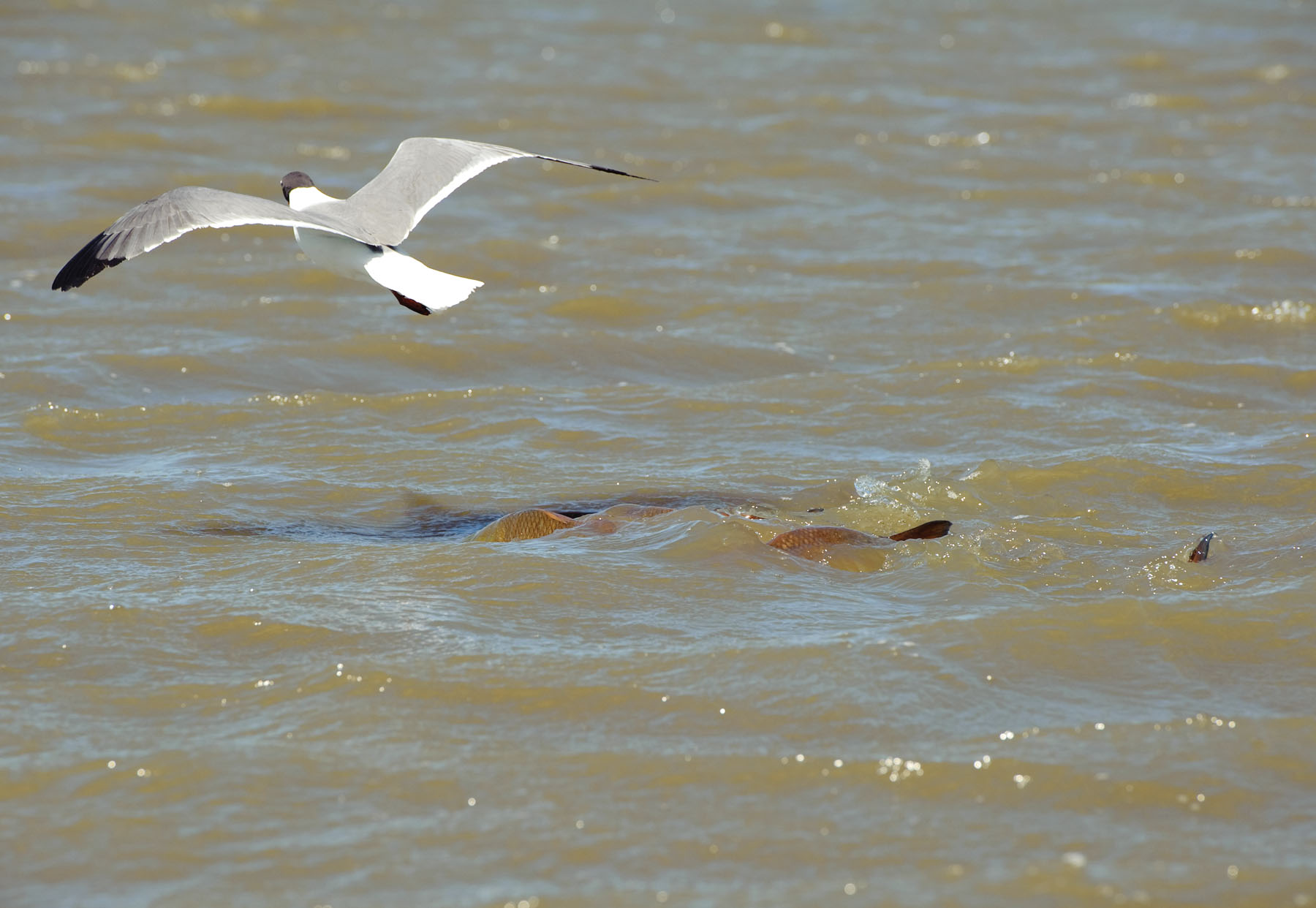 Redfish. Red Drum. Rojos. Rats. Bulls. Arguably no other species with so many nicknames and so few spots has made more of an indelible mark on our runs down to the coast. Their presence is unmistakable; witnessing a school of bull reds blasting bait offshore is just as cool as watching a pair methodically plowing and pushing small grass shrimp to the surface in the marsh. We'll sweat a bilge-full push-poling to a school in the back country, quickly drain trolling motor batteries chasing open-water schools and paddle a kayak miles seeking blue-tipped-tails. They'll eat anything today and nothing tomorrow. Greedily they feed on crabs, shrimp, and finfish yet also possess a strange affinity for gold-colored metal – deer hair too. Redfish give themselves away with mud boils and slicks, yet magically disappear in only inches of water. Fly rod or conventional, clear salty or stained fresh – it makes little difference to them; they swim in either. They maniacally twist around Boga Grips, crush hard-to-find Corkys, and the anger they inflict on topwater lures is Biblical. We admire their stamina and find pleasure in their power – even though we could have sworn we had a state record trout on the line. And yes, despite what all those trophy trout aficionados coolly say back at the dock, they'll gladly take a crimson back when those yellow-mouths are uncooperative.

The history of the species is as varied as its color. They have seen it all. Between mother nature and man, probably more than their fair share. Purse seines filled to capacity, hundreds of miles of gill nets, historic liberal limits, Arctic freezes, and Cat-5 hurricanes. If they could talk we'd all get an earful. Perhaps their frustration with our checkered past is why they make our drag washers and forearms always beg for mercy. Truth is, they have earned the right to torture our tackle.

Take for example the infamous blackened redfish craze. I've only had the Cajun concoction a few times - around the height of its popularity in the 80s. It was pretty good. Maybe I was expecting more. After all, this smoked-filled-room-recipe gets the credit for single-handedly pushing the species to collapse. But the warning signs had begun well before Chef Prudhomme hit the big time. Commercial fishermen in the 1960s began to harvest the large schools of redfish that roamed the shallows of Gulf coast estuaries – particularly those easily caught in backwater bays and marshes of Louisiana and Texas. Within just a few years a commercial over-harvest began to take its toll as gill nets arrived on the scene; pillaging these same waters. A species once "in the black" found itself "in the red." But from the ashes came a voice – a wakeup call for conservation, as Walter Fondren and other like-minded-stewards recognized and fought for the protection of the species. They understood the economic and social importance of redfish in our coastal community's future. The recreational sector caught on and began to tighten the belts of conservation from their side. Take my home state of Louisiana for example, prior to 1977 the recreational fishery for redfish was largely unregulated. That particular year, the Louisiana Department of Wildlife and Fisheries set a combined daily limit on redfish and speckled trout of 50, the same year Fondren began "Save our Redfish" in Texas. After several years of political wrangling, Texas soon passed the famous HB 1000 in 1981 providing gamefish status for the species. Louisiana followed suit 1991. Thankfully, their resilience is remarkable. Thrive they do – even despite recent tropical events; storms that have had dramatic effects on coastal, estuarine and terrestrial ecosystems along the gulf coast.

Hackberry Rod and Gun Club survived not one but two category five storms, both of which blasted their lodge and turned the Lake Calcasieu estuary into a giant washing machine. Taking aim at the upper Texas and Southwest Louisiana coasts, Rita and Ike were double-barreled destruction. "Those two storms turned us upside down," says Capt. Kirk Stansel, who has been guiding clients for redfish since the 70s. Shortly after getting the infrastructure rebuilt, Stansel focused on the fish. His concern about the storm's effects on the trout and redfish were quickly erased as he witnessed an incredible run of the species. "In all my guiding I have never seen the number of redfish that we have right now. Trout and flounder too, but especially redfish." Stansel theorizes about the timing of the Hurricanes relative to the late summer spawn. "Shortly before each storm we were seeing the big bulls all over the passes and beaches, indicative of spawning behavior. It's possible that the timing of both storms helped carry larvae and fry into all our surrounding marshes giving them a head start and protecting them from predation." When Stansel is not fishing he is in the surrounding marshes hunting and has observed how storms and environmental impacts have altered these vital nursery grounds over several decades. "The storms really killed a lot of vegetation and that decay created a bloom of organic matter - vastly growing the food source in the estuary," he says. Still, despite the storms short term effects he has seen the resource continue to thrive in the long-term. "Coastal erosion is certainly an issue, but the coast is resilient. We lost some big areas of salt grasses but the marshes are healthy now. Oyster grass is now growing in areas that lost salt grasses. The area is holding good quantities of ducks and fish."

Lance Robinson, Texas Parks and Wildlife Upper Coast Regional Director agrees, "While the storms certainly caused unfortunate infrastructure destruction, from a natural resources standpoint our marshes, have adapted over millennia to mother nature's destructive forces." Robinson suggests that after a storm inorganic material settles in the marshes, causing a buildup of natural bacteria. "The natural decay process consumes oxygen, breaking down the marshes, this break down is also the source of fuel - providing vast supplies of nutrients that jump start productivity in all species." Robinson suggests that anglers are certainly enjoying this pattern now, "Red drum numbers are through the roof, and on the upper coast, trout are doing great as well with some great recruitment numbers."

Robinson points out however that the current drought situation may not be as conducive to fishery blooms. "Shrimp, a primary forage species for redfish, is a one-year crop. As the larvae move from the gulf and into the bays they look for marsh edges with optimum salinity zones. During a drought these areas may be farther up the river systems and therefore provide less habitat structure," he says. Robinson points out that this can have an adverse impact on production of forage species favored by redfish. "A chain reaction occurs - as forage base drops - other species also have a drop in numbers." But, says Robinson, "Redfish (and seatrout) are opportunistic feeders; they will move on to other prey that move through the systems."

History has proven the species resiliency - and the future remains bright despite the past. Considering the present day round of severe drought, run-and-gun tournaments, text messaging, internet forums, cell phones, improved tackle, lures, and line, it's a good thing our Creator built them like small red tanks. Only time will tell what the future holds for this invaluable species - it is up to us to pass them on as we found them. In the meantime, they seem content to continue heating our drag washers - especially if we insist on calling them Rubber Lips.