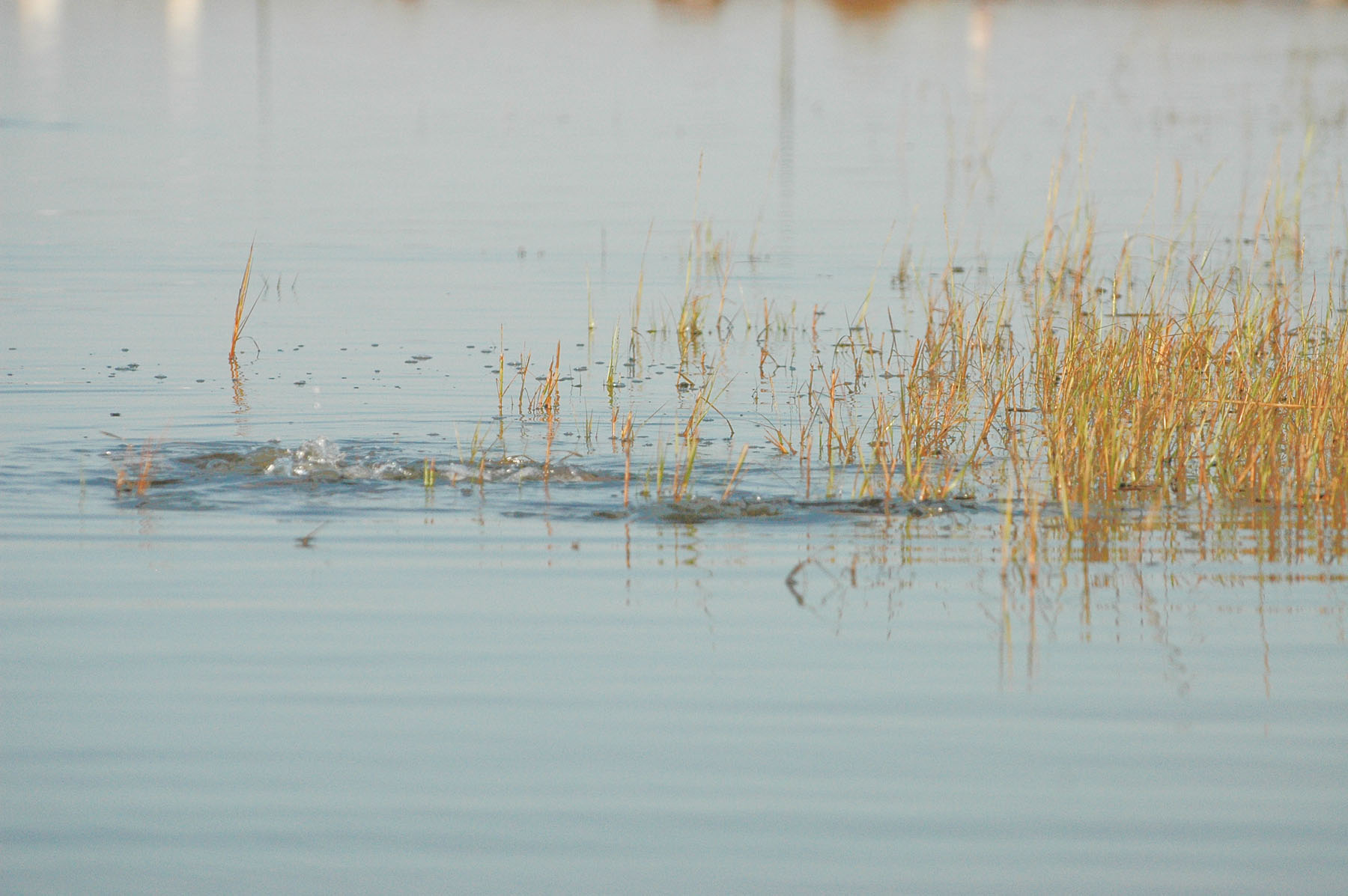 A pod of reds working along a point of marsh point.

Ahh, October. Hard to believe that by the time you read this the summer of 2012 will be but a memory. It seems like just a few weeks ago we were gearing up for long hot days on the horizon. As a dedicated sight-casting fanatic I love this time of year. The weather is generally pleasant, the bays are less crowded and the redfish are on the feed. Id like to propose we extend October for at least an extra month, maybe two.

Stepping into the air-conditioned office from the hot and dusty dove field to jot down my monthly thoughts, Im full of optimism for an awesome fall fishing season. This summer has presented us with plenty of rain along the upper coast and with that comes a banner crop of bait. I spend a good deal of my time in the marshes around the Galveston Bay system, and over the last few weeks Ive been astounded by the number of shrimp, shad, finger mullet and baby crabs. Its really cool to see the marsh rebound from last years drought. All of that food has the redfish population in excellent shape and ready to start fattening up for winter.

While baitfish and crabs are always on the menu for reds, shrimp appear to be their favorite. When shrimp are present in the marsh it seems as though most of the reds will flat out ignore everything else. Most of my customers are into catch and release, but I still clean enough redfish to keep an eye on their dietary preferences throughout the year. During times when Im seeing plentiful shrimp, their stomachs will contain more shrimp than anything and at times will hold nothing else.

We all know size really does matter, this is particularly true when it comes to the relationship between shrimp and reds. Around the first of August I was poling around the far reaches of the marsh and started seeing tons of tiny shrimp, basically whiskers and eyeballs. When the tide was up into the salt grass I would sweep my push pole through the edges of the grass and it would look like rain drops dotting the surface. The reds werent interested in them at this size, but I knew it was only a matter of time. Over the next few weeks I kept an eye on these little guys as they grew. Around the end of August the majority reached a half to three-quarters inch. Apparently the reds had been watching as well because the feeding started.

The first day I noticed it there were only a couple of small schools busily working the flooded salt grass. The next day there were six groups. By the end of the week there were feeding reds everywhere I looked. It would seem as though this would make for some easy fishing, but its a bit harder than youd think. The schools are tightly packed and moving at a fairly quick pace weaving in and out of the flooded grass. Their whole world lies inches within front of their face. They are banging through the grass looking to spook a shrimp out of hiding. Youll need a perfect cast in order to get their attention. A lure dropped a foot outside the grass will often go ignored, as will an offering that is too large to mimic their prey. My fly guys definitely held the advantage during this period because they were better able to match the hatch. For those throwing conventional gear, a small weightless or very lightly weighted soft plastic rigged weedless and tossed into the thick of the action was the ticket.

As of this writing the shrimp are about an inch and a half to two inches. Theyre still hanging out in the flooded grass on high tides and the reds are still beating the shorelines for a meal. My customers throwing conventional gear can now better imitate the preferred forage. Ive had them throwing light-colored TTF Killer Flats Minnows rigged weedless and the reds are chowing down on them. I expect this to continue through the final weeks of September and well into October. As we start to get a few fronts some of the more mature shrimp will begin to exit the marshes and will kickoff the bird fishing in the larger marsh lakes and out in the open bays.

In this year of plenty I suspect there will be plenty of smaller juvenile shrimp hanging back to keep the reds occupied throughout October and into November. The remaining shrimp set up one of my favorite patterns and are a big part of why I love October so much. Prior to the arrival of the front well get a push of higher tides on the southeast winds. The shrimp will get up into the flooded grass and the reds will follow them. Then the strong north winds will lead to lower than normal tides causing the shrimp to retreat to the open water burying into the mud. Roving schools of reds will root their way across the marsh lakes in search of the burrowing morsels. Once the north winds subside, the tides will rise and we get to repeat the whole scenario.

Ive always been a year-round marsh rat, but this pattern is the reason I started kayaking and eventually got into piloting a poling skiff. This type of fishing requires that you venture deep into the marsh, places where many boats simply cant go and its too muddy to wade. This is where the reds are swimming with their backs exposed far away from anything deeper than a foot. It never ceases to amaze me how far into shallow water those redfish will venture. This is the stalking and sight-casting that gets me fired up.

How long this activity will continue depends on the strength of the fronts. Most years we dont see an honest cold front until the first of December. If I recall correctly, last year the front that signaled the end of the shallow water marsh madness was during the week following Thanksgiving. In past years Ive had the marsh hold up all the way until late December, but sure as Christmas there will be a chilling cold spell that ends the fun. Over the years Ive come to sadly recognize that front. Its usually a good strong blow that completely drains the marsh with an extreme low tide followed by a cold night. The exposed mud gets seriously chilled and the returning tide is simply too cold.

However long it lasts, you can bet Ill be out there getting every minute of this season I can. I may take a quick break for a little bow hunting, but even as I sit in the blind I'll be thinking about those reds tearing up the marsh. Get out there and get you some.