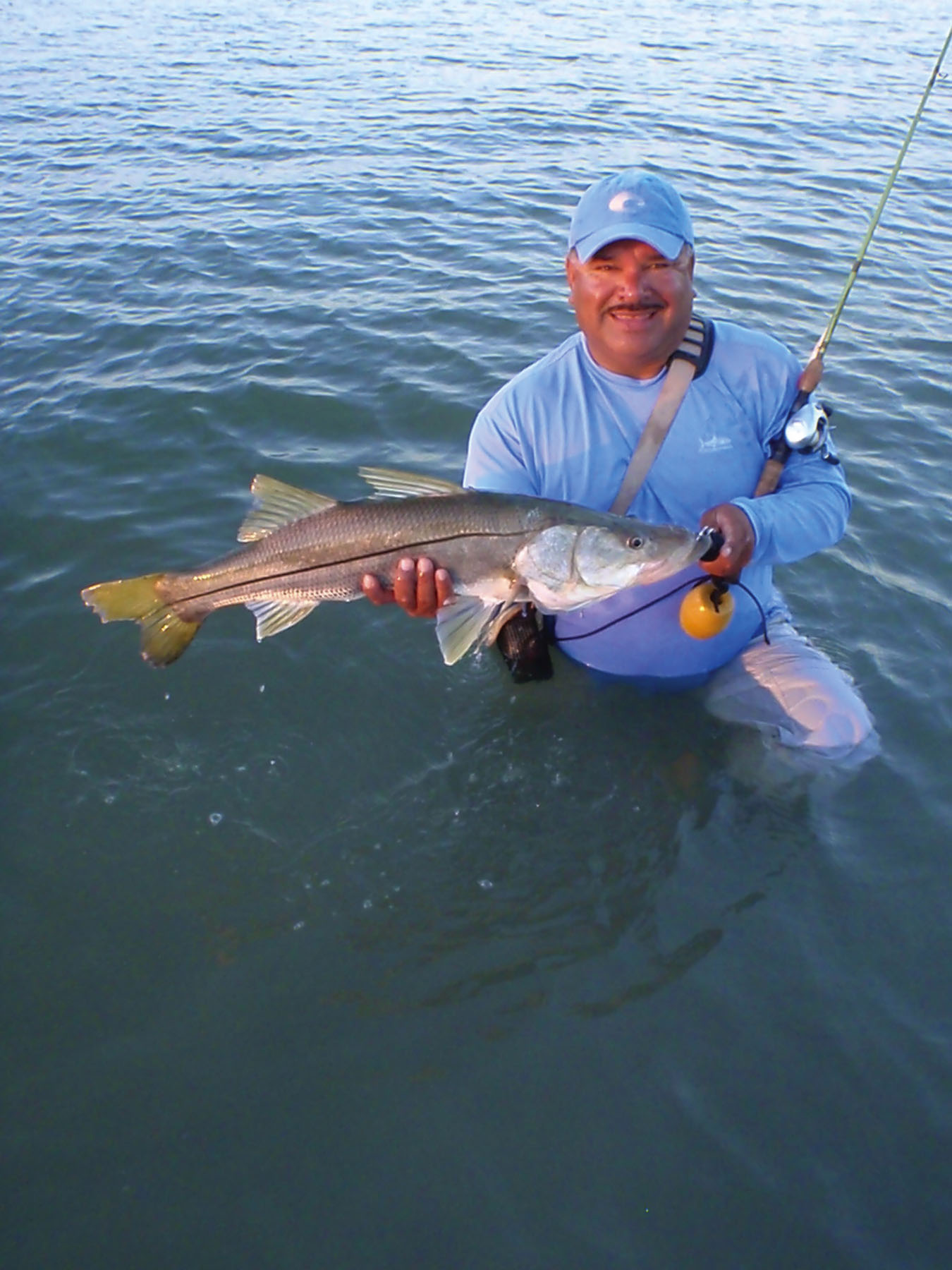 While great for the soul in appropriate doses; you have to be careful with your fishing habit lest you become hopelessly addicted. It's a crying shame. Many are the tales of fine young men and women going down ruinous paths, pitifully unaware they might possess talent for more respectable pastimes such as chess, dancing, maybe even polo.

The angle of descent into fishing ruin is fueled by the quest for adventure. All too soon home water holds no candle to new places and different species. Mental images of reels screaming against leaping trophies cloud better judgment and can keep you awake into the wee hours.

Lately I'm having that very problem with snook; Texas snook to be more exact. The blossoming snook population of South Texas offers anglers some of the finest inshore trophy opportunity this side of the Everglades.

Snook give me butterflies and what began on a lark several years ago has become an annual tradition for Pam and me. Several days before the new moon each June we pack up and drive down to Port Isabel to fish with Capt. Ernest Cisneros of Tight Line Charters. While this year's trip had been distracting me off-and-on for about a week, the butterflies arrived in clouds as we crossed the TX 186 overpass at Raymondville. Port Mansfield, you see, is normally as far south as I fish and TX 186 is where I turn east toward Port. The miles remaining to Port Isabel were filled with nervous anticipation and other snooky stuff.

Ernest always stresses stout flourocarbon leaders to resist the abrasive caress of snook and also their razor sharp gill plates so getting everybody tied up accordingly with forty pound leader on twenty pound braid was my very first order of business. Pam keeps her head about her and got us moved in and unpacked. I'm useless in that regard sometimes.

"White Skitter Walks and bone Baby Spooks are hot right now," Ernest had counseled. Following to the tee, I tied lures like he said and made drag adjustments to each reel. Next I worked on wade boxes, stocking with every thing in every color he recommended. Ernest said he had not yet been plagued with floating grass so I opted to leave treble hooks on the lures. This, as it turned out, was a mistake. More on this later.

Brent and Melinda Scheps, Pam's sister and brother-in-law, were our companions on this trip. Both are seasoned anglers and their river house at Matagorda is our usual base of operation when we fish there, so we were keen for them to get a good taste of South Texas snook fishing. Brent had landed snook in Florida but never in Texas and it would be Queenie's (my pet name for Melinda) first time for snook. Naturally, we were anxious for them.

Ernest's reports from earlier in the week made me giddy. "We caught twenty five snook Monday with several over nine pounds and fifteen very nice fish today, but we have some weather coming. I hope everything settles down and the pattern comes back together for you." Could he have injected more drama?

Thursday morning found us at the dock at the appointed 0515 and already 20 mph wind as Ernest launched his Shallow Sport. Early starts are his trademark to take advantage of the topwater bite that quite often fades as the sun nudges above the horizon. Cutting the engine several hundred yards upwind and a quiet drift toward the first wade is another. Easing into the water, Ernest gave instruction to spread out and fan our casts across the area in front. "Please do not get ahead of me. The snook can be stubborn and we don't want to walk through them." Sounds easy enough but try it sometime. If indeed a snook can be stubborn to take a lure, Ernest is even more so in his dedication to helping you catch them. And while you pray he is right try to hold back, your feet can get itchy.

Ten minutes into the wade Pam's floater was smacked viciously and the resounding pop was unmistakably snook. We caught only a glimpse at the end of her long cast, enough to guess its size as it rolled, and watched as it took line like a rocket. I'm still kicking myself for not having set her up with stout single hooks on that plug, floating grass or not, #3 trebles were no match for such a beastly pull. The plug came back with two barbs of the front hook perfectly straight.

Ernest scored next with a good eight pounder while Brent, Melinda and I worked on our spectator skills. Brent had two blowups that sounded like snook, Queenie was fishless, and my numbers were good but my species were all wrong. A rat red, a baby jack crevalle and a huge foul-hooked mullet that fooled me at first just weren't cuttin' the mustard after restless nights filled with dreams of snook.

Creeping along for nearly two hours and countless casts, Ernest announced we were approaching a sand bar, "the bait is more active up there and we really need to slow down and fish carefully." What the heck did he think we had been doing all morning?

The swap for soft plastic had already been made and some trout and small reds had answered our calls. "The snook are here, they're just not feeding yet," Ernest assured. So even slower, and with every ounce of focus we could muster, we heeded the words of the master. Good thing too.

My first thought was turtle grass as my slow retrieve turned into a tight line. Not wanting to miss a chance, I ripped a Bill Dance hookset that was greeted with a headshake and a ferocious explosion. Hallelujah I had a snook, and no baby either. Even with my rod tip thrust below the surface the danged thing wouldn't stay in the water. Six thrashing leaps and she was still way out there. My heart pounded like a bass drum until I had her on the Boga. Ernest called the weight at 10.25 pounds. My best snook ever and yet another reason for a deepening addiction.

I would love to tell you that we stood our ground and landed a dozen from that school but that didn't happen. The wind and water conditions were against us. Ernest asked if we were up to a tough challenge and relocated us to a horribly muddy place full of nasty shell that crumbled underfoot and left you mired to the knee with every step. Pam picked up a fat five pounder under a mangrove that blew up three times before eating her plug while Brent and I hooked several smaller ones. Queenie allowed as how that kind of muck took the fun out of fishing and we all soon reached the same conclusion. We finally gave up and went in search of redfish on better bottom.

Day two had Brent written all over it. First toss he tangled with a good red and followed it a few casts later with another. The tiny shell mound he was casting toward was evidently loaded as he quickly added a solid four pound trout to his stringer. Bait was everywhere in front of him and several big "swooshs" told us mullet were on somebody's breakfast menu. I was dying to move in and "help him" but the reef they were holding on was tiny and it was his.

The crash was spectacular as his fourth fish in thirty minutes inhaled the Skitter Walk. I knew it was a big snook and I prayed the fish gods would smile for him. Several hard runs that ended with high splashing leaps added to the experience as he played her carefully. Ernest had waded near and we watched the show as Brent finally brought her to hand. That fat eight-and-a-half sure put a smile on his face and the high-fives went on for a while. We are already booked for the new moon next June and hope to bring tales of another great adventure and how Queenie finally got her snook.

Ernest teaches his anglers to handle their snook gently as each is measured, weighed and photographed. Michelle Hominga is his top angler so far this season with a 12.5 pounder, a great mark we can all aspire to beat. Even though Texas regulations allow anglers to retain one snook per day between 24 and 28 inches, Ernest stresses even greater conservation in hope that what we are seeing in the Lower Laguna is only the beginning of a growing fishery. All his snook trips are catch and release only and I say, "Kudos!" If you decide to fish with Ernest for snook; please be advised of the hazards. You could end up addictedlike me.