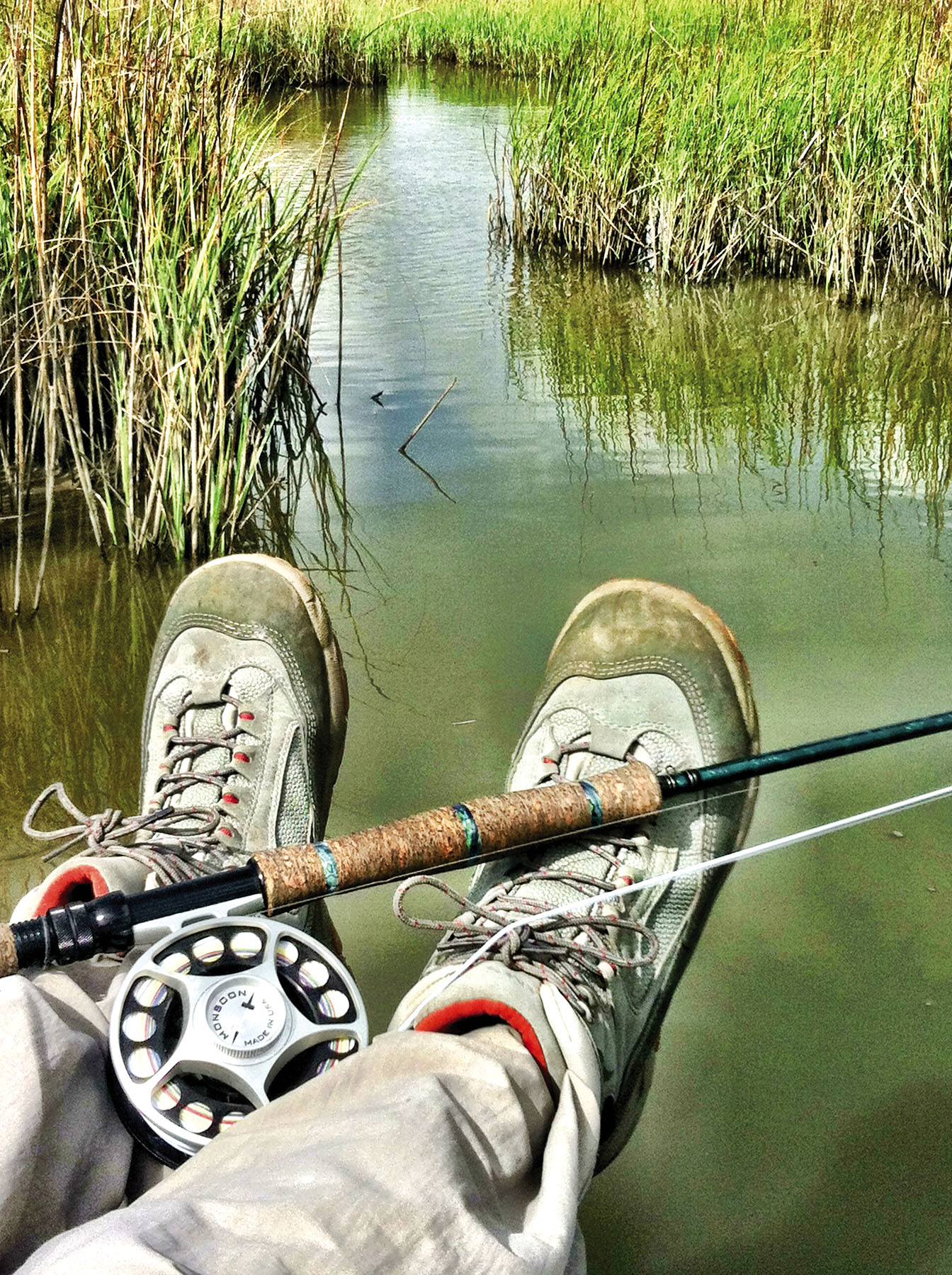 I know this may sound sacrilegious to most Texas anglers, but the treads on my wading boots haven't gotten much wear over the last ten or so years. Between kayaks, poling skiffs and knee-deep Galveston Bay mud I just don't often feel the need to go pedestrian. However, there are times when the only way to get to the fish is to lace up the boots and bail out.

Just last week I ended up in one of those situations. I had been on some good fish during some really low tides. Customers were treated to plenty of reds cruising around with their backs exposed. The low tides had sucked the baitfish out of the marshes and onto the open shorelines where they became easy prey for the foraging reds. It wasn't easy shoving the skiff way back there, but it was well worth the effort.

After a few days of putting other folks on these fish I had a day off and decided to get in on the fun. Unfortunately the tide schedule had shifted a bit and the activity only lasted about thirty minutes past dawn. The rising water sent the baitfish scurrying back into the marsh. The reds followed the bait and I followed the reds.

This worked out great for a little while...until they got so far into the marsh that even the Fury couldn't follow. It wasn't a matter of depth, there was plenty of water under the hull. It was the width that became a problem. Reds can, and will, swim through some mighty narrow places. Once they gave me the slip all I could do was sit on my poling platform and listen as they heartily fed further and further away.

Their constant crashing and splashing was driving me nuts. It was time to get wet. Wading through an upper coast marsh is best left to the gung-ho 20-something duck hunters, and with good reason. But I grabbed the fly rod and bailed off into a narrow winding no more than a few feet wide. The water was up over my knees and the incoming flow was surprisingly strong. Between the depth of the ditch and the height of the marsh grass I couldn't see what was ahead, only hear it.

Rounding a bend, the ditch opened up into a small marsh pond with three big reds cruising in and out of the flooded grass. One surged forward and crashed hard against the shoreline in a shower of bait. The other two headed towards the commotion only to be intercepted by a fly plopping into their path. The fight was a blast in the tight quarters, but it really upset the rest of the crew.

The ditch continued on the other side of the pond and led to yet another and another and another...each holding at least a red or two. At the end of the road was a rather large and very shallow lake. I paused at the entrance to survey the situation and take a rest on a big clump of grass. Spread out before me was one of the coolest sights I've seen in quite some time. There were at least a dozen upper-slot reds slowly cruising all over the lake with their backs exposed up to their eyeballs.

That alone was cool, but resisting the temptation to cast led to the best part. These fish were all separated and working different areas until one ran across a meal. The surging and crashing of the feeder immediately drew the attention of the others. They all headed in that general direction and the nearby baitfish were headed away. One or two of the closing reds crossed paths with the fleeing bait leading to more crashing. The others converged on the new commotion and the whole thing built to a frenzy. Then it all calmed down and everybody spread out going back into search mode.

I watched this scenario play out three times. Amazing what you can learn if you don't rush what's in front of you. Eventually though, the fisherman overtook the nature watcher. Once things settled down I eased into position and waited for one of the cruisers to get close enough for a cast. The fly landed in the zone and the red ate. During the ensuing battle nearly every other redfish in the pond converged on us. I found myself squatting in the mud and freezing as they swam within easy reach. If not the coolest experience I've had while fishing, it's definitely in the top ten.

One more catch and the party was over. I screwed up. I got so preoccupied with putting a grip on the fish that I failed to watch my six. A red had slipped in close and as I reached out for the landing he spooked. The zig-zagging roostertail cleared the entire lake in a matter of seconds. A big muddy cloud was all that remained.

It was at this moment that I realized someone had apparently moved my boat. There was no way I had walked that far. The skiff was just a little white spot way over yonder. The second revelation came about in the form of a very dry throat. I used to plan a lot better when I waded more often.

Mother Nature and her ways never cease to amaze me. I'm lucky enough to observe a lot of it from my perch on the poling platform, but perhaps I need to get out and go for a little walk more often.