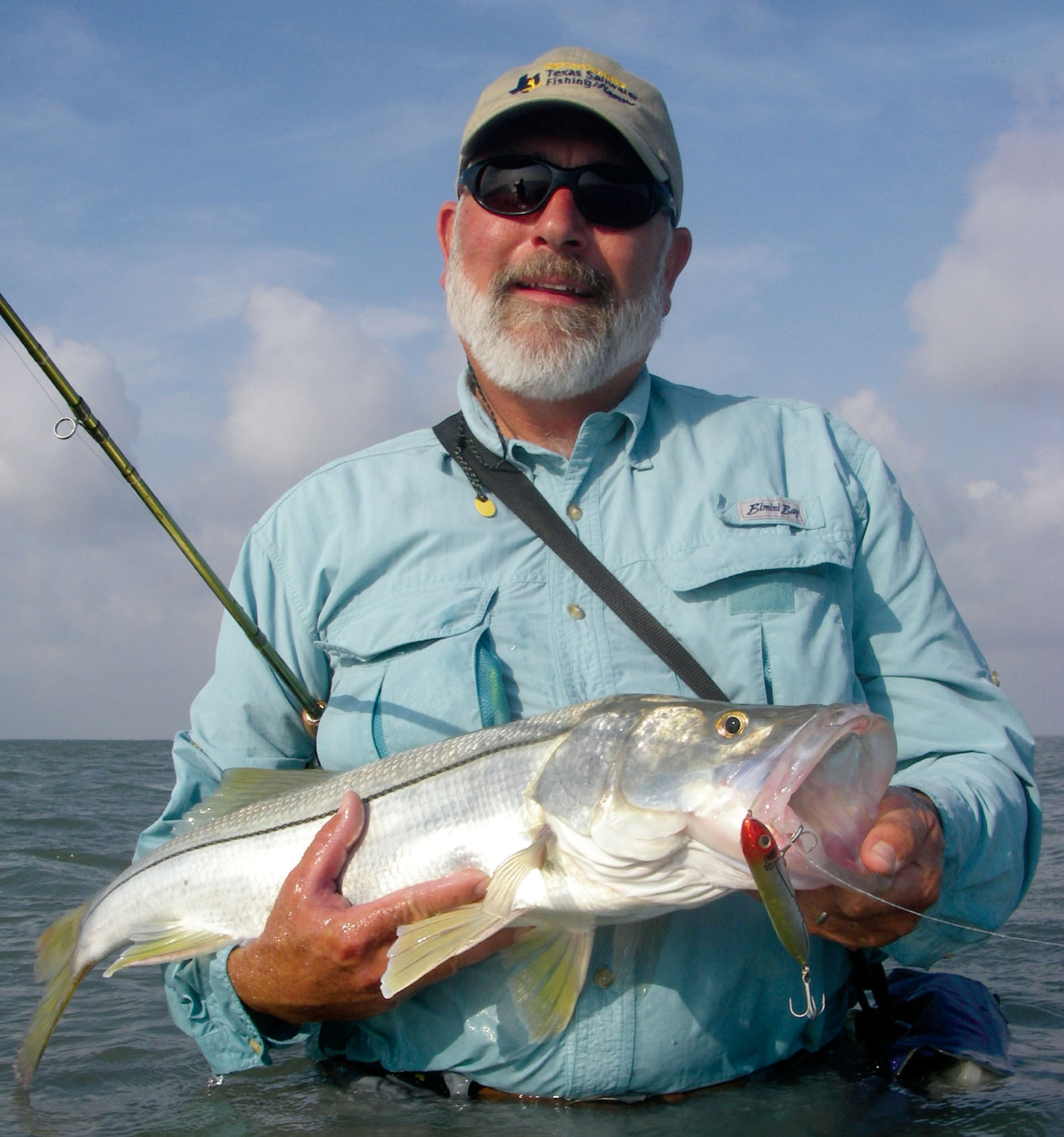 Author’s first trophy snook from Texas water.
Their proper name is common snook, but for the life of me I don't understand why. When hooked, a snook is as quick as a trout and pulls like a redfish. At the first sign of rod pressure they go full-burner and shoot skyward. I see nothing even remotely common in this, especially when said "common snook" weighs over eight pounds.

My snook fishing career was launched in Everglades National Park with Capt. Charles Wright. Charlie poled us down backcountry creeks where we landed lures beneath mangrove limbs. We had timed everything just right, the water level was low enough to fish under the mangroves and the snook were willing. We had fun with literally dozens of two to four pound fish but none heavier. Return visits brought reruns and I feared I would never shake the big snook skunk.

My first go at South Texas snook was with our own Capt. Ernest Cisneros, two years ago. Somehow, smack in the middle of really solid days, that same skunk followed me to Port Isabel.

Pre-dawn thunderstorms and strafing southeast that howled past lunch enabled the dastardly varmint to once again sink its claws and hang on. I jumped one big fish that pulled off.

My next trip tried to die during birth. Pam, my wife, and good friend Barbara Skalak, left Seadrift for Port Isabel early Thursday morning. Their plan was to visit an advertiser in Harlingen and then check into the motel. Longtime fishing pal, Stephen Plant, was to meet me in Houston where I had an appointment and we would drive together to meet the girls. We had plans for dinner on South Padre and a Friday trip with Ernest.

The skunk sprayed Pam first. She called from the side of the road near Kingsville with a flat and the spare stuck in the rack. Then Stephen called and said he had to see a client unexpectedly at 4:00 PM. I assured Pam that a tow truck was not terribly expensive and told Stephen to meet me in Seadrift as soon as he could. Pam and Barbara were rescued in time to make their meeting and Stephen and I finally left Seadrift at 8:00 PM.

We met Ernest at the dock with only faint light in the east and barely more sleep. Seadrift to Port Isabel takes five hours, which means barely enough time to wrinkle sheets. With gear stashed and seats taken, Ernest pushed from the dock assuring us we were in for a treat.

"We have to be early," he said. "We caught fourteen snook yesterday, one over thirty-four and one a little over thirty-six," all the while squinting ahead to pick his way down the channel.

I kept watch, suspecting the skunk was somewhere onboard.

"The tide is the key," Ernest added over the roar of the engine. "The tide moves the bait through the area we will be fishing and the snook will only feed in the current. Sometimes the bite lasts only thirty minutes."

I continued looking and sniffing for my old nemesis.

Stepping off the boat in weak pre-dawn light, Ernest laid out the plan. "Watch for the bait at the surface. Please do not get in a hurry, we have to fish very slowly across these grassbeds and potholes or we will walk through them. To catch a snook, you have to be more stubborn than a snook."

And so we fanned across the flat; Ernest setting the pace. Every eye straining for telltale ripples, every leg muscle tested by soft bottom and uneven contour, every nerve poised for a giant blowup.

This was when I learned that snook fishing with Ernest is focused angling. Trained in other waters and accustomed to habits of different quarry, I wanted to forge forward. And, I just knew that damned skunk was following me. Stephen got the icebreaker. A stubborn six-pound red was no snook, but at least it was a bite.

Shortly, I stuck a three-pound trout and Ernest got a red, then Stephen got a giant blowup.

Now Stephen is no guy for waiting on things to happen, that's not his style. I could see his frustration at being held back. I could also see tiny steps being stolen when Ernest wasn't watching.

Thirty minutes seemed like a day and then it happened. In a foamy swhoosh, the snook Ernest promised was there decided to eat. Stephen was throwing a Spittin' Image and praying the tiny trebles would hold. We all prayed with him. The big fish screamed out of the water landing on its side with an awesome splash. Nearly as excited as he, I encouraged, "Keep your rod down, Stephen," as though he needed to hear it. Careful pressure through three long runs brought the prize close enough for a deft swoop with the Boga Grip. A heavy eight pounder; Stephen's best including Florida, and certainly more than enough for a session of backslaps and high-fives. Quick photos and CPR carefully administered, Ernest allowed we could take a few steps forward.

My turn came when Ernest noticed a baitsmashing disturbance about seventy yards to my right. "You really need to ease over there," he offered in hushed tone.

Noticing the vicious walk-the-dog Ernest was using; I began to mimic his effort. (Always listen to your guide.) Fifteen cautious steps brought me close enough to a still-nervous school of mullet. Fifteen wicked attempts to drown my Spook Jr. with a frenzied retrieve accomplished little except scattering more bait. The image of the varmint sneaking up my back was burning into the back of my brain.

Ernest's words about stubbornness came rustling back. This was focused angling and I needed to adjust mine. One more cast, another cast, did you see the swirl? Quick, throw back.

Three jumps, loosen the drag, don't lean on her so much, grass on my line, keep the rod down, don't stumble; so many thoughts flash through your mind.

Without my noticing, Ernest had waded to my side with a loaner Boga. Finally the fish was in hand. Nine pounds even and a tad longer than thirty-four inches. Thank God the skunk had finally drowned.

We ended the day with eleven snook, a handful of reds and a few trout, all released. Ernest said we had a pretty good day. Stephen and I thought it was awesome. Even the girls, whose trophy snook will surely come on another trip, agreed it was an outstanding day.

Ernest shared snook stories over late lunch at Pirate's Landing. Growing up in
Brownsville, Ernest has been lucky to live in the heart of this South Texas snook fishery all his life. His earliest efforts were around piers and in the Brownsville
Ship Channel as a young boy.

"We've had snook here as long as I can remember but the numbers really began to increase around 1999 and 2000. It has only been in the last five or six years that I have been able to target snook successfully on my charters. Before that we only caught them occasionally, not enough to be able to pattern them," he told us.

Ernest went on to describe the territorial nature of snook and their orientation to structure, which explains why you might only find a few trophy fish on any given flat. He also told of how the bite lasts only thirty or forty minutes most days, only feeding when the current is running. Even with optimum conditions and careful patterning, it is rare when the bite lasts more than two hours.

The snook fishery of South Texas is just beginning to thrive. Twenty consecutive mild winters have contributed kindly and TPWD regulations that allow only one fish per day in a 24-28" slot have supported the growth.

Ernest has his own rules. "I tell my clients that we are fishing for only a few bites and all snook are released on my charters. I want everybody to understand how fragile this fishery is and unless we give them a chance this is all we'll ever get," he said.

Now Ernest is a humble fellow, polite to a fault, and possesses an incredible passion for fishing. His dedication to the conservation of the South Texas snook fishery is highly commendable. His knowledge of their behavior and habits has been gained over thousands of miles spent wade fishing. His reputation is growing, and not surprisingly, his date book was filled months before snook season, with standbys listed in the margins. We were lucky to snag a cancellation date.

The drive home was a joy. Hallelujah - the skunk was dead; no flat tires, no emergency appointments. We made memories with Ernest and we are planning to go back.