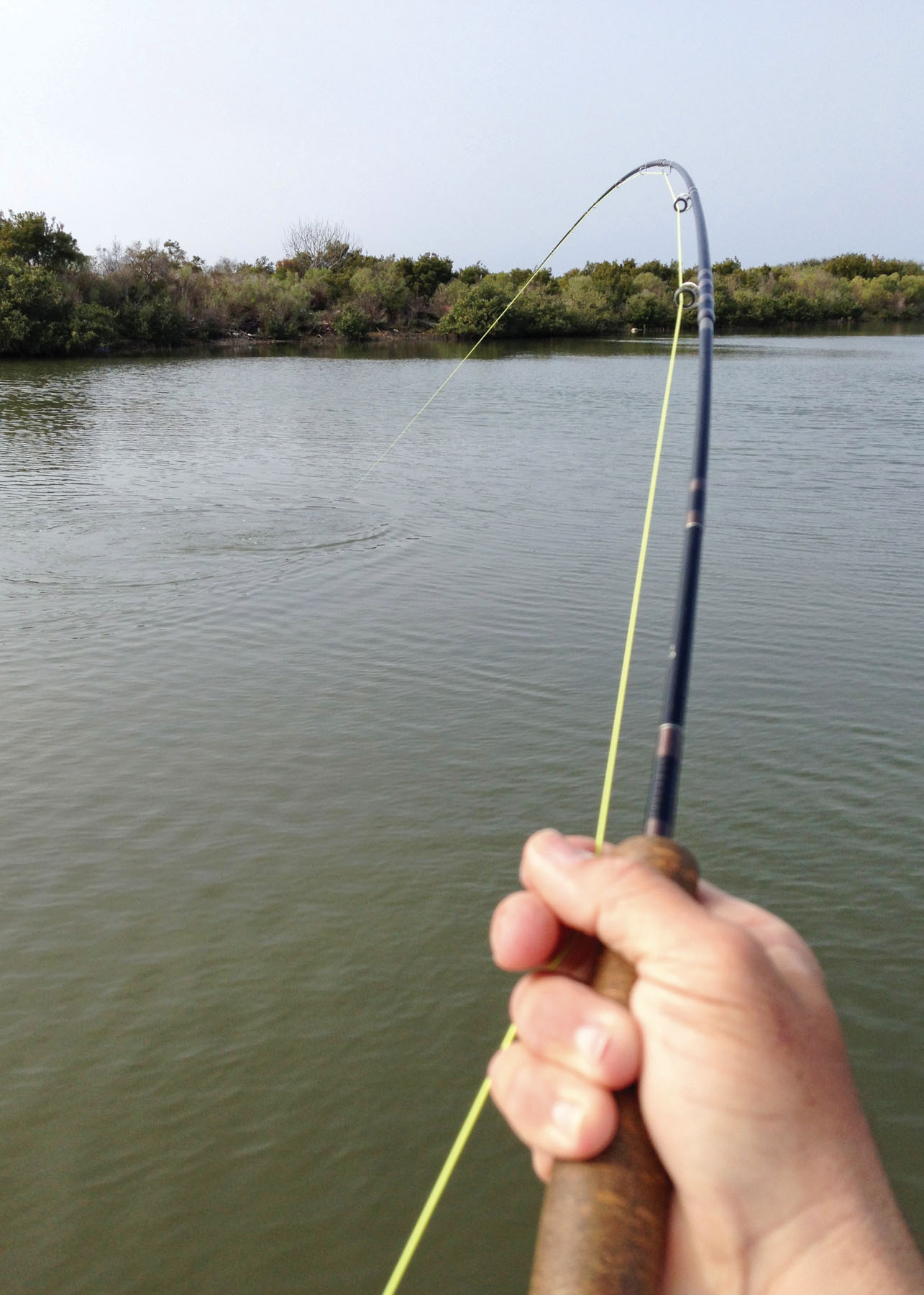 The 4-weight getting’ ‘er done.
Every now and then I need a little excitement to spice up my fishing. I spent the past January and February guiding over in the marshes of Louisiana and was fortunate to have many of my regular customers make the trek to join me. It was an awesome experience and I lost count of the 20-something pound redfish that came over the gunnel. "Best-ever red on fly" became a common statement. On one of my rare days off I decided to head out and catch a few for myself.

Having rented a house on a canal lot, I had packed a little 4-weight thinking I might play with some schoolie trout under the lights. Well the trout hadn't shown up and the tiny rod sat in the corner while the big rods got to have all the fun. As I headed out the door for my goof-off day I got an idea to see what I could do with an ultra-light outfit on these monster reds.

The wind was near dead-calm and there wasn't a cloud in the sky as I headed to the ramp but, there was a big ice storm wreaking havoc on the Houston area and it was due to hit me later that afternoon. As I motored out of the harbor I went over my options and chose a spot that had been holding some bull reds on the smaller end, just some lil' ol' 15-20 pounders. I figured I could start with those and see if anything broke.

As I came off plane and the boat settled there were two big wakes moving away from the commotion. Based on Texas redfish you'd think they were blown opportunities, but not in the Louisiana marsh. I made the mistake one time of calling these fish dumb in front of a Cajun angler and he quickly corrected me saying"We prefer to call them cooperative."

I hopped up on the poling platform and got situated. It's a bit of a circus act to pole and be ready to cast a fly rod, but over the years I've come up with a system that works pretty well. I use a Sea Level Flyfishing stripping bucket on the platform with enough line off the reel for a decent cast. This bucket is set up with a cut-out that allows the rod to rest across the top in easy reach. The fly is pinned to the soft foam and the tall platform allows for enough line to hang outside the rod tip for a quick cast without too much false casting. For the push pole, there's a Birdsall Marine holder that allows me to quickly release and secure the pole.

No sooner had I gotten settled in and the two big reds that had pushed off came cruising backcooperative or dumb?

Either way, I like the way these fish act. Holding the 4-weight and looking at a couple double digit redfish had me briefly questioning myself. What the hell, it'll just cost me a flyor maybe a rod.

A couple quick false casts and the fly landed perfectly in the path of the closest fish. No hesitation. Fish on and a loudly protesting drag. Time to get the Power Pole down and relocate to the bow. The little rod performed flawlessly, the drag stayed smooth and all the knots held. A few minutes later I was holding a chunky 15-pounder. Cool!

A short time later three good reds were cruising down the shoreline. Another cast and the bar was reset to 18-pounds. Now I was feeling a little cocky and decided to make a move to a nearby area that had been holding bigger fish. It wasn't long before a big shadow was moving across the bow at about forty feet. It was definitely over 20 and headed for a shallow hump. As his back broached the surface I let loose with the cast. The cast that was supposed to land a foot in front of him plopped almost on top of his head. They may be dumb, but they aren't stupid. Gone. It happens.

As I stood there laughing at myself, the "gone" fish turned around and came right back. He was searching hard, almost as if he wanted to find whatever it was that had landed on his head, and kill. Being a nice guy, I obliged and tossed the fly right in his path. The eat was awesome, as vicious as you'll see on a fly. This fish was hot and peeled off a good bit of line before settling in for a tug-o-war. Once again, everything held together and the bar was reset at 22-pounds.

A quick check of the weather site showed the front was closing fast. The dark bluish-purple line forming on the northern horizon confirmed it. Go in or get another? Silly question. That's what good rain gear is for.

Staying out was a great idea. As the front approached, an almost eerie calm settled over the marsh. The air had that heavy-humid feeling and the light wind fell to zero. At that point the fish went nuts. There was a long mud bar maybe six inches underwater with about a five foot drop-off on one side and a two foot deep mud flat on the other. Several huge reds started crashing onto the bar from the deep side and then cruising across onto the mud flat where they preceded to terrorize finger mullet. Of all days to forget the video camera.

With the skiff positioned on the end of the mud bar I just stood and watched the show. And what a show it was. At one point there were seven reds over twenty pounds feeding within easy casting distance. The prefrontal frenzy was in full effect. Speaking of the front, it was barreling south and my time was running out.

With a newfound confidence in my pip-squeak rod I picked out the biggest fish and unloaded a decent cast. It was probably a little farther out front than it should've been, but the fly no sooner touched down and the bull was all over it. When the fight was over my Boga sagged below the 26-pound mark. Awesome.

Moments later the front blasted through and the show was over. The next couple days were spent iced-in and tying flies, still grinning ear to ear. Hunting elephants with a BB gun wasn't so crazy after all.