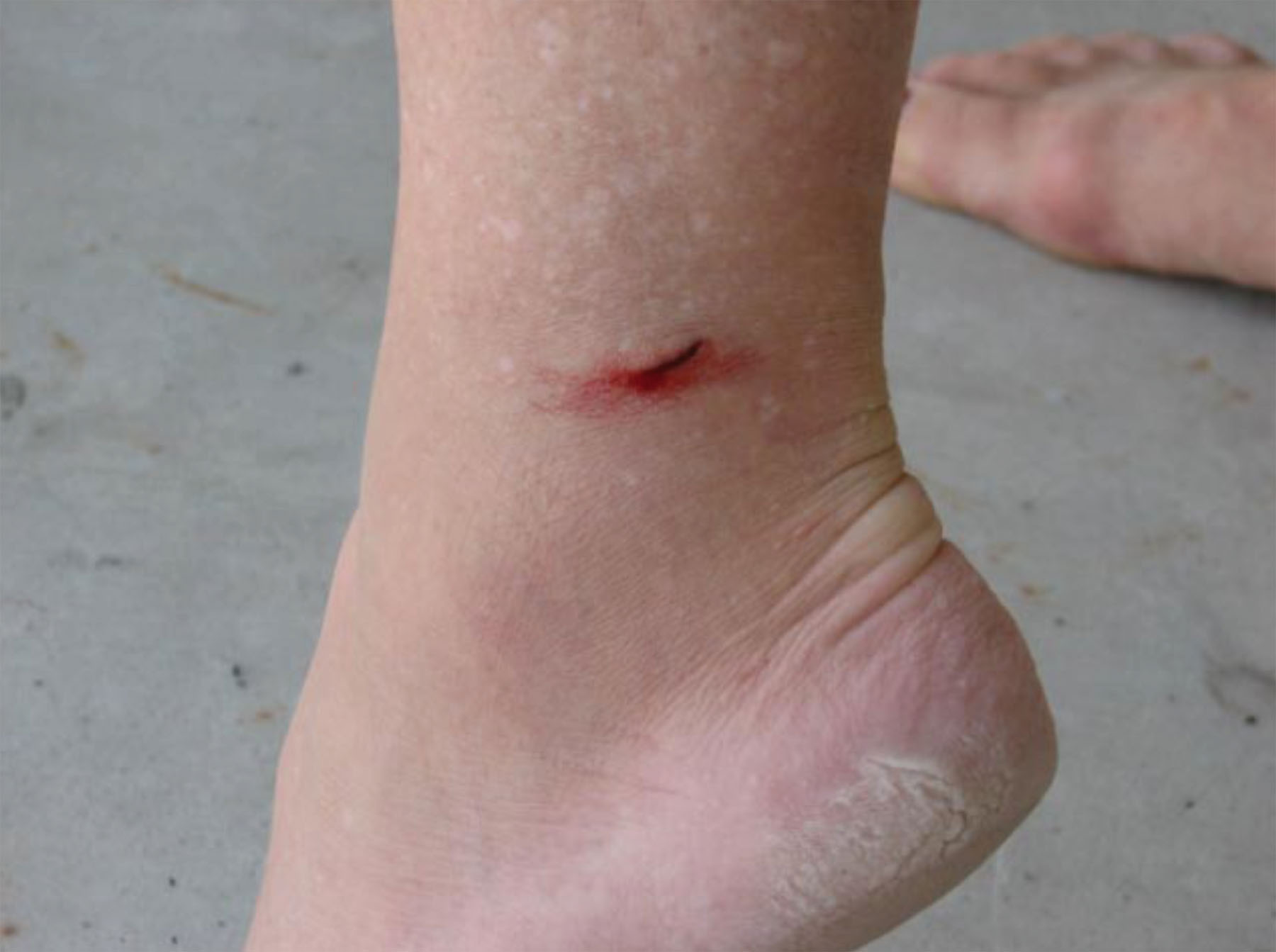 It had only been a short time since Mike McBride had been hit by a stingray and I should have taken that as a hint to wear the Ray-Guard shields I keep in my gear bag. Mike was likely still in the hospital on the day I didn't even think about wearing them. (It would be two months before I read the article in TSWF Mag and saw the photos.) But like so many others, it takes a hard lesson to quit being blonde.

That Sunday Father's Day was my last shot at making it through the second round of the Texas Lady Anglers online "Summer Madness" tournament. In this competition, fisherwomen have a month to catch their best trout, red, and flounder, photograph each on a Check-It Stick, and submit them to the tournament moderator. Each month, the field of participants narrows until one winner is announced in September. This was the third year I'd entered, as it is the easiest way for me to participate in this group's events as most are held on Galveston Bay.

I had survived round one that was conducted April 15 through May 14; and now it was the last day of Round 2. I'd caught a decent trout and flounder, but no red. Husband and fishing guide Mark Brown said we needed to go up north to the spoil banks near the Land Cut to find a red. The water was like chocolate milk and the wind was howling; but we'd been dealing with that all spring. I was willing to get out and wade the island shoreline to try for that elusive red.

We were just about to quit; Mark said to keep trying and he'd get the boat. He waded back to join our friend Cynthia who wouldn't dream of getting off the boat and who had just bought her fishing license that day. It had been years since she'd been fishing. I kept moving forward, shuffling my feet without even thinking about it. I couldn't count on watching the bottom as I was in muddy, waist-deep water. And just like that, I caught a red! Finally! While stringing it, the hook got caught in the stringer rope.

My right foot sunk lower and lower into the mud as I tried jerking the hook out. Taking one step back on my left foot to gain some leverage, the stingray hit me. The pain was instant and I can barely describe how intense it was. Like a lightning bolt coursing through my left side from the foot all the way up is the only similarity I can possibly think of even though I've thankfully never been struck by lightning. I screamed in agony! I turned to see Mark taking his time pulling the anchor, he and Cynthia laughing and talking. In the howling wind he never heard my screams. People who have suffered trauma say that time starts moving in slow motion, and so it was for me. I finally remembered to wave my cap, our standard signal for pickup, screaming all the while. The motor started, and slowly, he headed toward me. About the halfway point he saw that I was in trouble, hurried, and pulled me onto the boat. What began next would be a man-of-experience series of events. Mark has been hit three different times and only the last time did he take care of it properly. We already knew that Mike McBride hadn't taken his wound as seriously as he needed to and, at one point, faced losing his foot.

This is the important part for anyone who will ever decide to go wade fishing without some type of stingray protection Get heat on it immediately. Mark had just a little bit of hydrogen peroxide left in the bottle in his First Aid kit. But from experience he knew to catch the hot water being discharged from the cooling system, soak an extra pair of wading pants, and place it on the wound. We were twenty miles north of Port Mansfield, though, and it would be a long ride back. The pain was excruciating. Mark stopped every couple miles to soak the pants again in the hot water and wrap it around my ankle.

When we got back to Port, he filled a deep pan with very hot water, added Epsom salts, and had me soak my leg in it until the water was no longer hot. Then, we repeated that process. It was the only thing that alleviated the pain. I tried taking Alleve, and it helped somewhat, but the pain was tremendous.

We are blessed to be close friends with our family doctor, so I headed to Raymondville and went to his house. He gave me my first round of antibiotics and I continued to soak my foot until late that night, sleeping with my foot propped on a pillow. The soaking continued through the next day as walking was difficult and the pain still quite intense. I also went in to our doctor's office for an X-ray that Monday to be sure no part of the barb had been left behind. On the third day, it finally quit hurting so badly.

A week later, the pain started again; so back to the doctor's office I went for another round of antibiotics, more soaking in hot water, and more staying off my feet. It lasted for two days this time. Since then, I've had no trouble with it; although it took several weeks for the wound to start to close. Now, all I have is a small purple scar that looks rather benign compared to the time and effort it required to take care of the initial wound.

I had always thought that stingray hits were so dangerous because of the bacteria in which the animal lives. However, in the Internet research I did while I couldn't do much else, I learned that stingrays inject venom into their victims. That venom begins to break down the flesh; and if you go back into the water soon after, as Mike did, you risk other infection getting inside the opening.

My red helped me to progress to Round 2; so the stingray hit wasn't the end of my summer fishing by any means. But there was no more wading without leg protection. On September 15 I was announced winner of TLA's "Summer Madness Tournament."

Since last June, my Ray Guards and Reef Boots have been in their permanent place on the boat, except when they're on my legs. I made the decision like that American Express ad Don't leave home without them.

Just in case; be prepared!
1. Your boat/kayak First Aid supplies should include hydrogen peroxide.
2. Consider buying a Stingray and Jellyfish Sting First Aid Kit and keep a towel to soak with warm water from your outboard's cooling system vent. Heat alleviates the pain and starts to draw out the toxins.
3. Consider keeping a baggie of Epsom Salt in your gear bag.
4. Stock Adolph's Meat Tenderizer (plainnot flavored) in a zip-loc bag in your kayak or boat for jellyfish stings and stingray hits. It breaks down the protein in the venom.
If you're hit, get to a doctor immediately! Antibiotics are not optional.