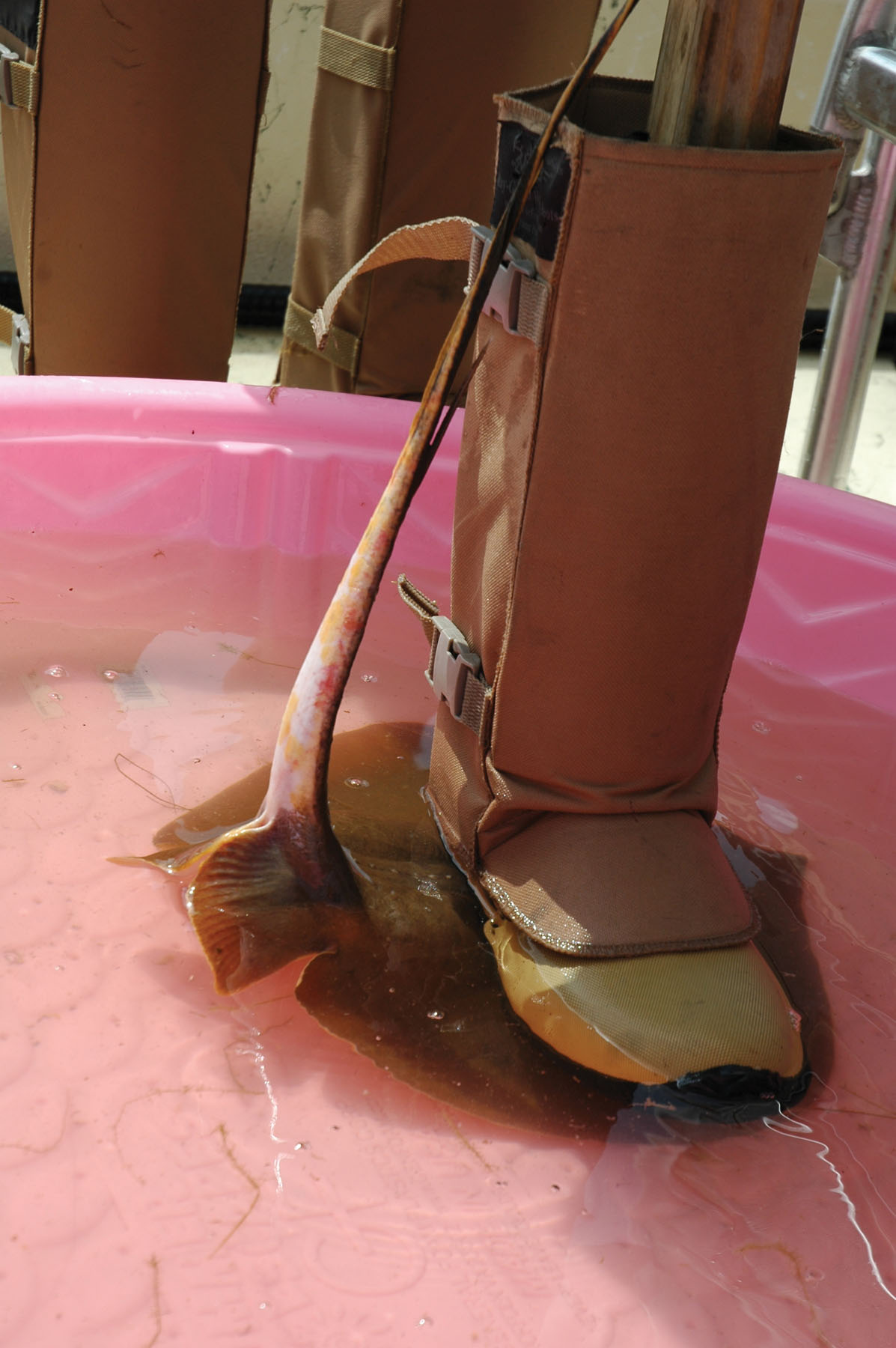 The stingray used in this experiment was released unharmed!

If you have ever waded, you have likely heard a buddy cry out; "Lots of rays in here better slide your feet!"

We all hope that by dragging our feet along the bay floor we will avoid stepping on a ray. It goes without saying that our senses go on full alert when we see a ray gliding along; we shift into low gear and shuffle forward, but is that enough? What about murky water? What happens when we step in a hole? What about thick grass where rays will bed completely hidden? How about when we yank a vigorous hookset and take half a step back to gain leverage what then? In case you haven't noticed, rays are opportunistic hunters, fond of trailing waders and ambushing small organisms we scare up from the bay bottom.

Every angler that wades places himself in harm's way. I think we can all shudder at the number of times something fluttered underfoot or brushed a wading bootie or bare leg. We probably also know somebody whose luck ran out.

Is experience and perfecting our wading technique enough? Capt. Mike McBride took one in the Achilles' tendon last summer. Capt. Billy Sandifer has been hit several times in the surf, once in the sole of his foot. Capt. Lynn Smith took a hit high on his calf several years ago. Capt. Chad Peterek was the unluckiest. Chad suffered a horrible wound in his calf a full five inches deep that required two surgeries and nearly three months of staying in the boat a tough sentence for a wade fishing guide. I would guess these guys have at least 100 years combined experience, but obviously still not enough.

I place wading without protective gear right up there with playing with fire and handling snakes; if you do it do it long enough you're going to get hit, burned or bit. It's simply the law of averages.

The most practical solution is donning the right gear. My personal choice is the ForEverLast Ray- Guard Wading Boot I don't get out of the boat without them! For summertime wet wading I wear one size larger than my shoe size with fleece-lined neoprene wading socks. In cooler seasons I go up two sizes to accommodate breathable stocking foot waders. Equally effective are stoutly constructed wading shoes like the ForEverLast Reef Boot worn in tandem with the Ray-Guard Shield.

There are probably more excuses to stick with traditional wading booties and continue sliding our feet than there are reasons to wade, and we hear lots of them. "Ray-Guard boots are heavy and restrictive. They hold water. They make my legs tired and make my feet hurt. They're too expensive." But like rattlesnakes, we never see the one that gets us.

I've even heard guys question whether the shield on the Ray-Guard boot would stop a stingray barb in weak attempts to justify poor decisions. Well, if you're one of them I wish you luck, but if you want to know more here's your answer. Billy Gerke, Capt. Gary Gray and yours truly ran a little test a few days ago.

We caught a stingray and placed it in a child's swimming pool filled with saltwater. With a Ray-Guard wading boot attached to a piece of 2x4 stud; we put the boot to the test. What followed was very enlightening.

First, we learned a great deal about how the ray reacts when you step on it. Unlike popular misconception, the ray never wielded his tail or the barb in an offensive manner. To the contrary, the tail, being prehensile, is deployed in a grasping or wrapping maneuver. Many think the tail and barb are whipped about in striking fashion as a snake does false! The tail is used mainly in pushing, much like you would try to push my foot away if I stepped on you. In the majority of these thrusts, the barb never contacted the boot. This would explain how we can sometimes step on them without being stuck.

Depending where and with what pressure we pinned the ray, its reaction varied from nothing to violent rearing and thrashing of its body. Stepping on the rear-most edges of the wing brought little reaction. Stepping with body-weight pressure on the head and front part of the wing would cause the ray to arch its body and flutter repeatedly, all the while pushing against the boot with its tail.

Direct tail strikes that allowed the barb to contact the boot were few and we caught none with the camera. It is however critically important to note that those few thrusts that did make contact never penetrated the shield that wraps the ankle and calf regions. Good news for waders!

We also learned that it would not take a monster ray to inflict a wound high on the thick part of a man's calf. I would call our captured ray medium in size, yet with its body arched and tail thrust upward, its barb was easily 12-inches above the floor of the pool. A larger specimen could easily reach higher. A quick measurement of the barb length showed that even this medium-sized ray could have inflicted a wound of three to four inches depth, plenty deep enough to create a nasty wound channel that would require a long time to heal.

This test was performed and this report is offered purely as a service to our readers. We are not experts in stingray behavior and it possible that a ray in captivity does not behave like one in its natural environment. I would strongly urge that should anybody decide to conduct anything similar they would exercise extreme caution stingrays can be very dangerous.

I would also like to say that we do not accept product or payment in exchange for articles such as this. TSF-Magazine can take no responsibility for the performance of any product and we are offering no guarantee beyond that of the manufacture of the products demonstrated or tested. Wade fishermen should always shuffle and bedded rays should be avoided. Enjoy the great outdoors, wear your stingray protection, fish hard, and above all- fish safely!

For more information on the products referenced go to www.foreverlast.com