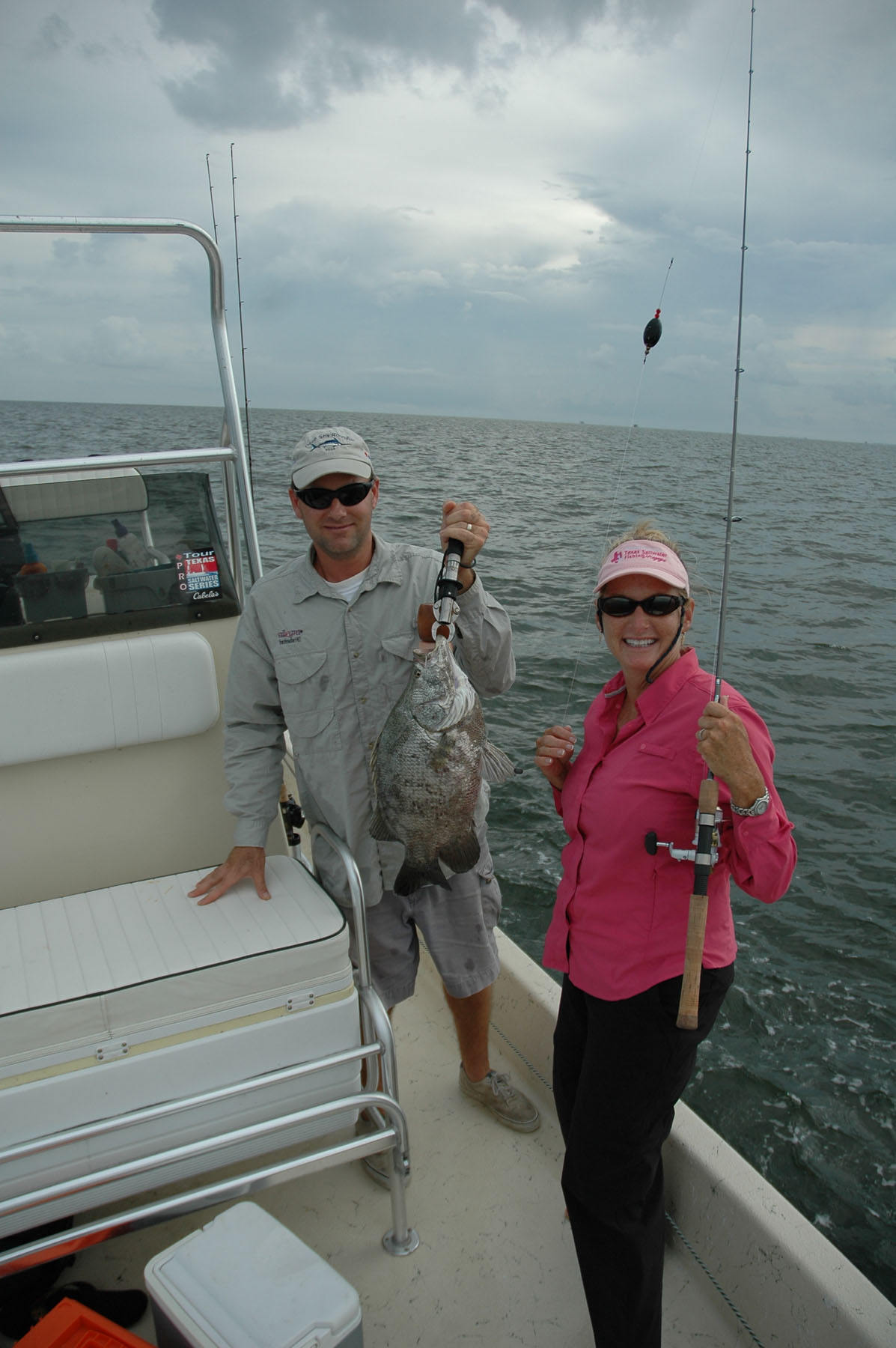 Ask your average Texas inshore angler if they have ever landed a tripletail and in most cases all you will get in reply is a puzzled look. Offshore anglers encounter tripletail as they work weedlines and production platforms but, again, few can lay claim to much knowledge or angling prowess. But to be fair, fishermen aren't the only ones in the dark; fisheries biologists and resource managers can do little more than scratch their heads when talk turns to tripletail. Popularly held scientific opinion is just that; hard data regarding lifecyles, spawning habits, where they come from and where they go when they leave is almost non-existent. One fact is obvious though; West Matagorda Bay is the summer home for lots of tripletail.

Up until a couple of months ago my personal knowledge of tripletail was limited to what I had read in my pocket-sized fish identification guide. My attempts to catch them had ended unsuccessfully for the simple reason that I didn't have a clue. Enter veteran Matagorda fishing guide and my personal tripletail fishing mentor, Capt. Bill Pustejovsky.

Billy and others who cut their eye teeth in the Matagorda bays unraveled the secrets of tripletailing long before a lot of us knew where Matagorda was. When I first quizzed Billy about tripletail a couple summers ago I noticed a twinkle came to his eye but his response was a little dodgy and it threw me at first, "Tripletail, yeah we got 'em here; what about 'em, why you asking me about tripletail?"

Like I said, Billy is no Johnny-come-lately and I was about to learn that when it came to tripletail he was no blabbermouth either, "Look, the guys that know what they're doing don't go around crowing about it, OK. Catching them is actually pretty easy once you learn how; biggest problem is they are the best eating fish you ever put in a frying pan and we've got people that will wipe them out if you turn them on to it. The last thing we need are a bunch of magazine articles and more pressure on these fish."

Prior to TPWD's implementation of tripletail regulations in September 2006 that declared them gamefish and set a daily bag limit of three, it was Katy-bar-the-door in some fishing circles when word got 'round that the 'tails were back. It turns out that the tripletail's affinity for hanging on structure and their voracious appetite can be their greatest undoing. Throw in the uncommon delectability of their flaky white flesh and you can understand Billy's reluctance to talk.

Capt. James Shuler of Fin & Feather Guide Service lent credence to Billy's comments, "before the regs went into effect I saw 120-quart coolers full of tripletail." James was describing his years as a field technician for Bill Balboa TPWD Matagorda Bay Ecosystem Leader. James also spent considerable time catching tripletail on rod and reel as part of TPWD's tripletail tagging program. So, like Billy, he knows what he's talking about.

So why then this article if two of my buddies have cautioned me about publicizing West Matty's mystery fish? Well, it goes like this. Tripletail are gamefish now and the old ways are no longer legal, the three fish bag limit put an end to the abuse. Plus, I want to let you in on a really neat story.

It is no secret that Texas anglers are the beneficiaries of the greatest success story in the conservation of coastal resources. Through the combined effort of Texas A&M and University of Texas research scientists, TPWD, CCA Texas and some very generous Texas corporations, our bays have been stocked with more than a half billion redfish and trout fingerlings over the past 23 years, a magnificent shot in the arm for Mother Nature. And today, UTMSI (University of Texas Marine Science Institute) are looking at tripletail!

At the invitation of Dr. Lee Fuiman and Dr. Joan Holt I made a couple of visits this summer to the University of Texas Marine Science Institute at Port Aransas. Jeff Kaiser took me on a tour of the facilities where I spied a tank that held a lone tripletail. Jeff explained he had caught the fish in the Aransas Channel and went on to say their team had a keen interest in setting up a study program. The ultimate goal would be to spawn tripletail in captivity, something nobody has ever accomplished, and hopefully also define hatching and rearing protocol to support stocking programs. So now I had a twinkle in my eye!

Jeff went on to explain that getting the program started would obviously require more than one fish, but where and how could they get them? I volunteered to help and naturally my first call went to Capt. Bill.

Billy got on it a trout on a Top Dog. "We'll have to get right to it, though," he shot back, "we've already missed the peak, they head back to the gulf as soon it starts to cool off."

We laid some hasty plans for Jeff and Barrett Fines to meet us at Port O'Connor. They were to bring a transport tank and oxygen system for the ride back to Port Aransas. We'd all get in my boat with Capt. Bill as guide and we'd get the research team some tripletail easy! Well almost.

Like Billy cautioned on the phone, late September was a little late. I should also mention that the day's forecast included an 80% chance of thunderstorms, and the livewell on my boat was never designed to carry a 20-pound tripletail. We went for it all the same.

Billy had us pull up to the first channel marker piling we came to on the ICW a few miles east of Port O'Connor. Billy baited up with a live shrimp on a long leader under a popping cork and jumped up on the bow. "Idle me up to about 100 feet from it on the upwind side and try to hold it steady in reverse." Sounds easy, I thought, but the wind and current had other ideas.

Eventually I found the knack of handling the boat; yet pilings and buoys later our only takers were pinfish, sheepshead and gafftop. Eventually we worked toward a set of small wooden gas production platforms for a change of scenery and hopefully better luck. Capt. Bill was persistent, but with storms brewing on all sides and the water growing rougher, my faith was fading.

Billy fired the cork at the platform and fed some slack letting it drift between the pilings. Instantly the cork took a dive and he reared back in a Bill Dance hookset. The reel screamed and Billy screamed louder, "Back me up, we gotta get him away from there!"

A couple minutes later Barrett snapped the Boga Grip on Billy's fish and hoisted it aboard all 18 pounds of it. We quickly set about getting the fish into the livewell and then did the obligatory high-fives. We had our first study fish!

I aimed the boat back downwind for a second attempt as Billy baited up but it wasn't to be, Pam had already claimed the bow. "It's my turn!" she blurted as the cork took flight. Her shot was slightly wide but Billy coached her to pull it around a few feet and then start letting out line. Bingo we had our second fish on. Nobody had to remind me; I was already at full reverse. This one was pulled the Boga to the 15 mark and we were beyond giddy.

With lightning flashing and the sea mounting we beat a retreat to the TPWD dock at Port O'Connor. Jeff and Barrett got the fish transferred to their tank and took off for the lab. All we needed was another day and another dozen fish to set up the study. Hopefully we'll get them before they all head to their winter haunts in the Gulf of Mexico.

Anyone wishing to learn more about UTMSI's tripletail project, or perhaps some of our readers would like to participate in tripletail captures to help enlarge the study population, Jeff Kaiser can be reached via email at [email protected]

Here are some tripletail facts from Bill Balboa: