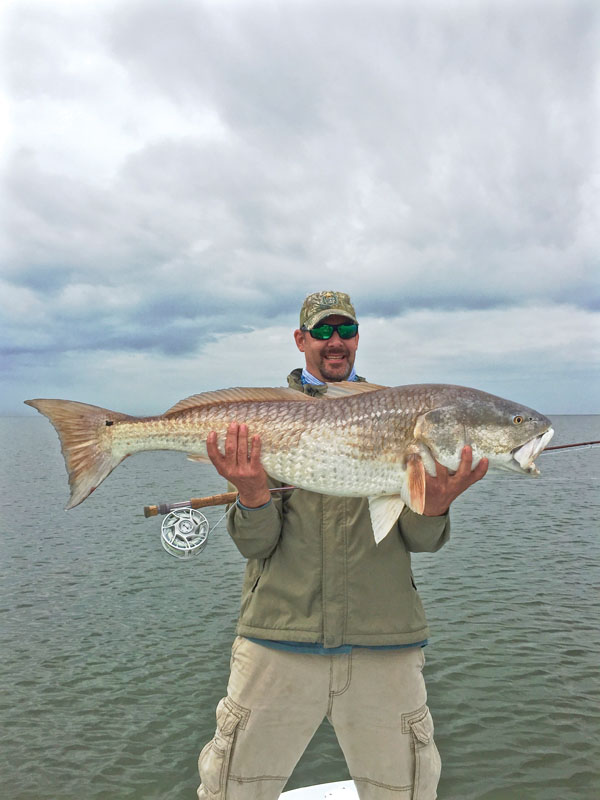 Well my two months guiding in south Louisiana is winding down. As I write this I'm awaiting the arrival of the last customers. It has been fun and challenging, as usual. It has been four years since I first tested these fertile marshes and I've learned so much on every trip. I'm very thankful for all of my regular customers who make the six hour trek from the Houston area and others who travel much further.

I get a real kick out of seeing these guys shatter their personal bests for redfish and black drum on the fly. It is also nice to get shots at sheepshead that will actually eat a fly. While high winds, high tides and frequent fronts have dirtied the water more than usual; there have been plenty of great days of low tide, clear water and cloudless skies. Water clarity issues this year have led me to do more exploring than years past and have led to the discovery of some new honey holes.

Even on the toughest days there are usually several shots at good fish. And on those days when everything lines up, the fishing has been spectacular. To this point there have been eight redfish over thirty pounds, a few dozen over twenty and many more in the teens brought to hand. The largest pulled the Boga down to just past thirty-six. Amongst all of these reds, there have only been three inside the slot. The Louisiana marsh in the winter is truly an amazing place.

It is hard to describe the run of a red that size in a foot of water when he realizes he's been duped. From my vantage point atop the poling platform it went something like this:

"How about the one coming at twelve o'clock, twenty feet?"

Seeing that big white mouth flash as the gills flare is so freaking cool.

As the big bull took off I could see a couple dozen large mud boils popping all over the flat. No telling how many more were scattered nearby, but we had just seen eight over thirty pounds inside thirty feet.

The bruiser never even slowed until he was a solid hundred yards into the backing. Several big runs followed and a good twenty minutes passed before we got our first good look at him. I immediately put away the thirty-pound Boga and reached in the glove box for the big sixty. No doubt he'd bottom out the thirty.

The final surges and close quarters tug-o-war at the boat are always the most nerve-wracking for me. So much can go wrong. Everybody is excited and you really don't have much ability to turn a fish like that away from the lower unit or trim tabs with a fly rod. I can hardly breathe until the fish slides over the gunnel.

Several customers have kidded me about the way I talk to fish in those final moments. Hell, I hardly even realize I'm doing it. I know it is a lifetime achievement for the angler and I really don't want to screw it up. Luckily this one was somewhat cooperative and sufficiently worn down to allow a clean landing.

High fives, photo-ops and a nice long over-the-gunnel revival before watching the beast slide away, and a quiet "thank you." Now let's go get another one.

The last three years I've come over for January and February. Next year I might slip over to test the waters a bit in November and December as well. If you would like to take a shot at these bull reds along with some monster black drum and hungry sheepshead, shoot me an email and ask to be put on the list. When I get my dates set up I'll send out an email laying out the program. If you have a larger group I have a few other great guides who work the area as well.

I'm about ready to get myself back to Texas, but already looking forward to next winter.