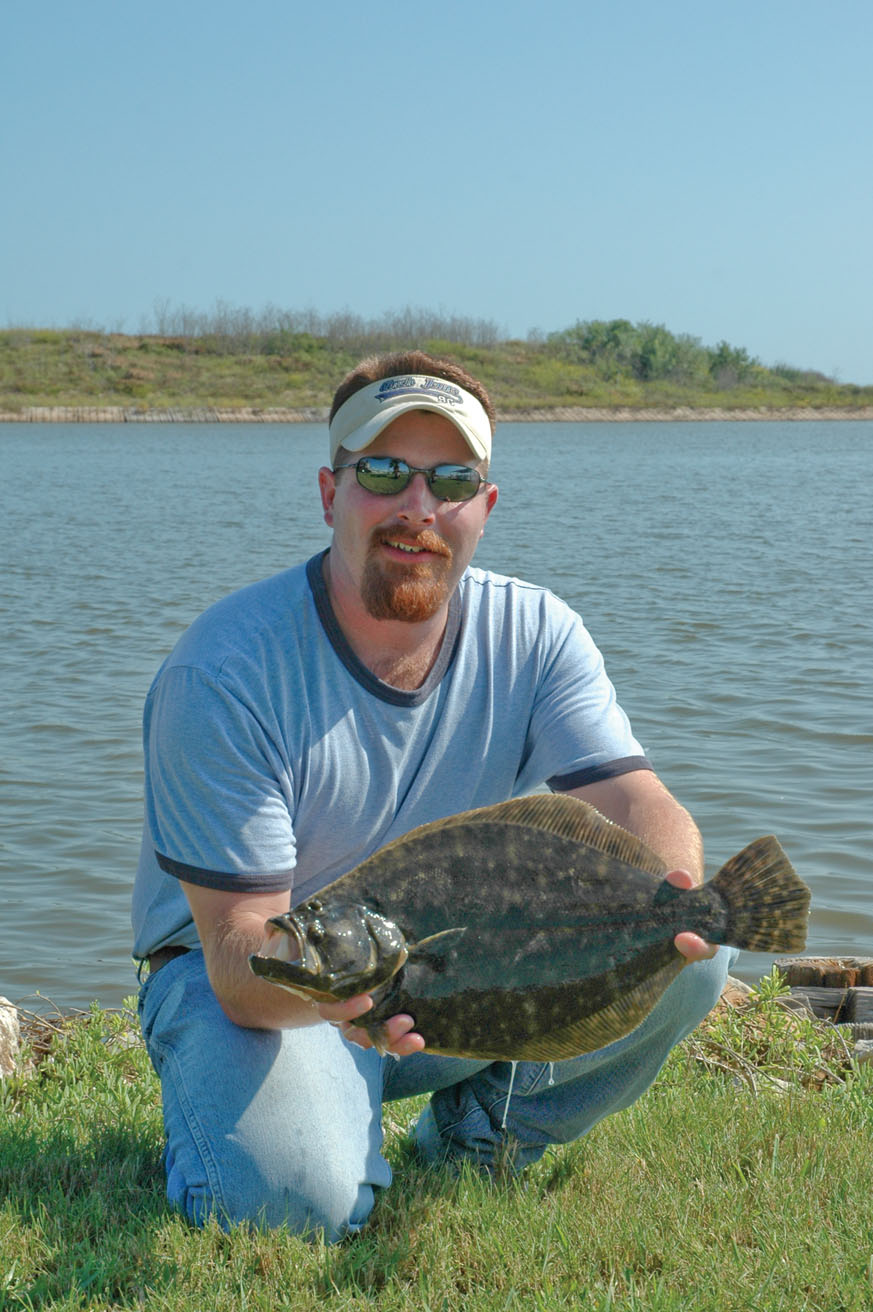 Reports from all along the Texas coast would seem to indicate that anglers are enjoying a better than average flounder year. Not surprisingly, speculation is running strong that the southern flounder in Texas waters are enjoying a strong rebound as the result of the very conservative regulations enacted by TPWD in September 2009. The biologists told us that reducing the harvest would provide a powerful boost to the spawning biomass and that even though the flounder life cycle was approximately six years (and that it would take that long to see the full benefit of the new regulations), as much as 80% of the benefit would appear by year three. So - we now have two years under our belt - how do you view the southern flounder fishery of today versus what we saw a few years ago?

This is the main question I posed to our staff of guides that write the bulk of the monthly fishing reports and forecasts published here each month. I also asked them to share a few tips and ideas and other flounder facts as they see them. I prepared a questionnaire seeking brief yet hopefully informative answers that would enable our readers to become better informed and enjoy greater flounder fishing success. Listed below are the questions and the answers they provided.

I hope you find this presentation enlightening, I know that I did. A couple of things became highly noticeable to me while compiling the responses - middle and lower coast guides are reporting a significant increase in flounder numbers while upper coast guides are seeing stable numbers but not much growth. The other thing that really caught my attention was the general lack of desire or interest from charter fishing clients to target flounder specifically during their guided fishing trips. Jay Watkins' report of the number of flounder his clients have been catching this fall season really got my attention and the weights he reported really blew me away. Do not hesitate to email or call with your own ideas, opinions, etc., of what's up with Texas flounder. Reader feedback is very important to us. - EJ

1) During which seasons (or months) do you find it practical to target flounder on your charters.

2) How often do your clients indicate a desire to target flounder specifically and how often are you able to accommodate them.

3) What areas and structure types would you consider prime flounder habitat.

4) Do you prefer natural or artificial baits for flounder? Please include bait species if natural and lure names and sizes if artificial. A quick explanation of your rigging method would be nice here but just a few words - please.

5) From your own fishing results, how would you rate flounder numbers today versus the recent past of say three to four years?

6) Ten words or less - give me your best flounder advice.

● May and June are usually pretty good, September and October would be the best.

● About 30 percent of the time. Easiest to accommodate during those four months, but bite is decent enough year round.

● Main lake drains and points lined with roseau cane, the mouths of bayous, and bulkheads and rocks on the ICW.

Killer Flats Minnow. ICW flounder are best fished with finger mullet on a Carolina rig with a 3/0 Kahle hook and a sinker heavy enough to compensate for the tide.

● The numbers seem to be slightly better, but the average size has been much better this year. Continue 5 fish limit....lower minimum size to 13" to minimize retaining only females.

● Rig your soft plastics on 1/4 heads and bump bottom, hopping it just enough to avoid hanging up. Braided line helps you feel the bite.

● April, October, and November are probably best but we see a few all year round.

● Very seldom, my clients are more interested in fishing for trout and reds.

● Bayou mouths and adjacent flats are natural hot spots; flounder also like to hang on spoil humps and along channel ledges.

● My first pick would be small paddletail swimbaits; red/white and black/chartreuse are good colors. On the natural bait side, the Carolina rig is very effective with finger mullet or mud minnows on small Aberdeen-style straight shank hooks.

● I do not believe there has been much change in the local fishery. Based on the number I can recall from many years ago I would say we have fewer today than when I was a kid.

● The best flounder months would be October-November and March-April when they are migrating.

● I do not have a flounder clientele per se, although they are always happy to catch one.

● I do not target flounder specifically so flounder catches on my charters are accidental. However, from the number of "accidents" we are having lately I'd say the fishery is much improved-the new flounder regulations really did work!

● Fish drains, mouths of cuts leading to channels that flounder would follow as they travel offshore-Gulf Cut, Boggy Cut, and all drains in the Diversion Channel.

● I would say flounder fishing is best between September and December.

● I really never have anyone that wants to specifically target flounder.

● The structure seems to change by the season for me. Early in the fall I catch more on the sandy shorelines with grass patches (Dewberry shoreline is good). In the late fall and winter I would target them in sloughs that lead into back lakes.

● I would rate the flounder fishery as the best I have seen since I started guiding. All during 2011 we have been catching flounder just about everywhere we fished.

● Flounder will sometimes grab your bait and just hold it a few seconds in their jaws, not taking it into their mouths. Give them a few seconds before setting the hook.

● February through March and then again in the fall beginning with the full moon of September and continuing through November.

● Almost never until this year - but to be honest I never really pushed it. I cannot recall ever having enough flounder to make it feasible in the past. My charters landed 227 flounder so far this fall season and we've kept only a handful; we had two days with over thirty flounder, and I'm talking three, four and five pounders. You can bet we're targeting them now!

● We can catch them in the sloughs and marsh drains often but the best is probably the areas of shell, mud and a little grass along drops and ledges that run parallel to the shorelines between three and five feet deep.

● I like the five-inch Bass Assassin in red shad, 1/8 ounce jig worked at a slow twitch in the lower foot or so of the water column, not exactly dragging the bottom but a slow hop.

● Over the years we have always caught a few flounder while fishing for other species. The change in this fishery since the new regulations took effect a couple of years ago is nothing short of amazing.

● Trips are never set up for it, but there is great deal of excitement after we catch a few, and then about 50% will ask if we can catch more. When we try for them, specifically, we usually catch them. This year was one of the best I have ever had.

● Areas that have a tacky to soft bottom, pot holes, a quick edge drop, or any drainage between sand bars, etc.

● Fish for trout with a five-inch Bass Assassin and you might get lucky and catch a flounder.

● We see a few all year but late summer until about Thanksgiving is when they are most numerous.

● Almost never requested however we can generally always scrape up one or two if somebody wants one for dinner or we need one for a tournament stringer.

● During fall months they tend to be more gut and channel oriented. In other months I find them around the sloughs and sometimes around potholes and scattered clumps of seagrass.

● Artificial - paddletails - TTF Flats Minnow, Gambler Flapin' Shad, Kelley Wigglers. I like the natural colors and I rig on 1/8 or 1/4 ounce 3/0 jigheads depending on the depth.

● Definitely better, the average size of the flounder we have been catching over the past year or so is much better than a few years ago.

● When you're seeing small mud puffs, (flounder scooting ahead), or maybe you're getting some "pecky" bites but not hooking up - slow it down and cast repeatedly to the same spot. Flounder can be stubborn and a little tricky to hook but worth the extra effort.

● Some of our best flounder catches have come in late spring and right on into the middle of summer. October and November are known to be the prime months.

● The only time I specifically target flounder is when clients have hired my services for a local tournament and part of the weigh-in stringer includes flounder. Targeting them has been relatively easy this year.

● There are certain spots along the ICW that tend to be flounder magnets. Basically, any channel that intersects the ICW is a potential hotspot. Flounder will usually lay along the edges and dropoffs facing the current.

● I prefer to use small artificial baits with lots of tail action. The junior-sized Texas Trout Killer-II (white body with chartreuse tail) is my favorite. I prefer a 1/8 oz jig head, extremely sharp for better hookup ratios.

● In years past we used to have trouble finding a flounder when we needed one. Evidently the population has increased this year because we are catching quite a few without even trying. I would say this is the best I have seen since the mid 90s.

● Work your presentation slower than normal, close to the bottom, and have a net handy.