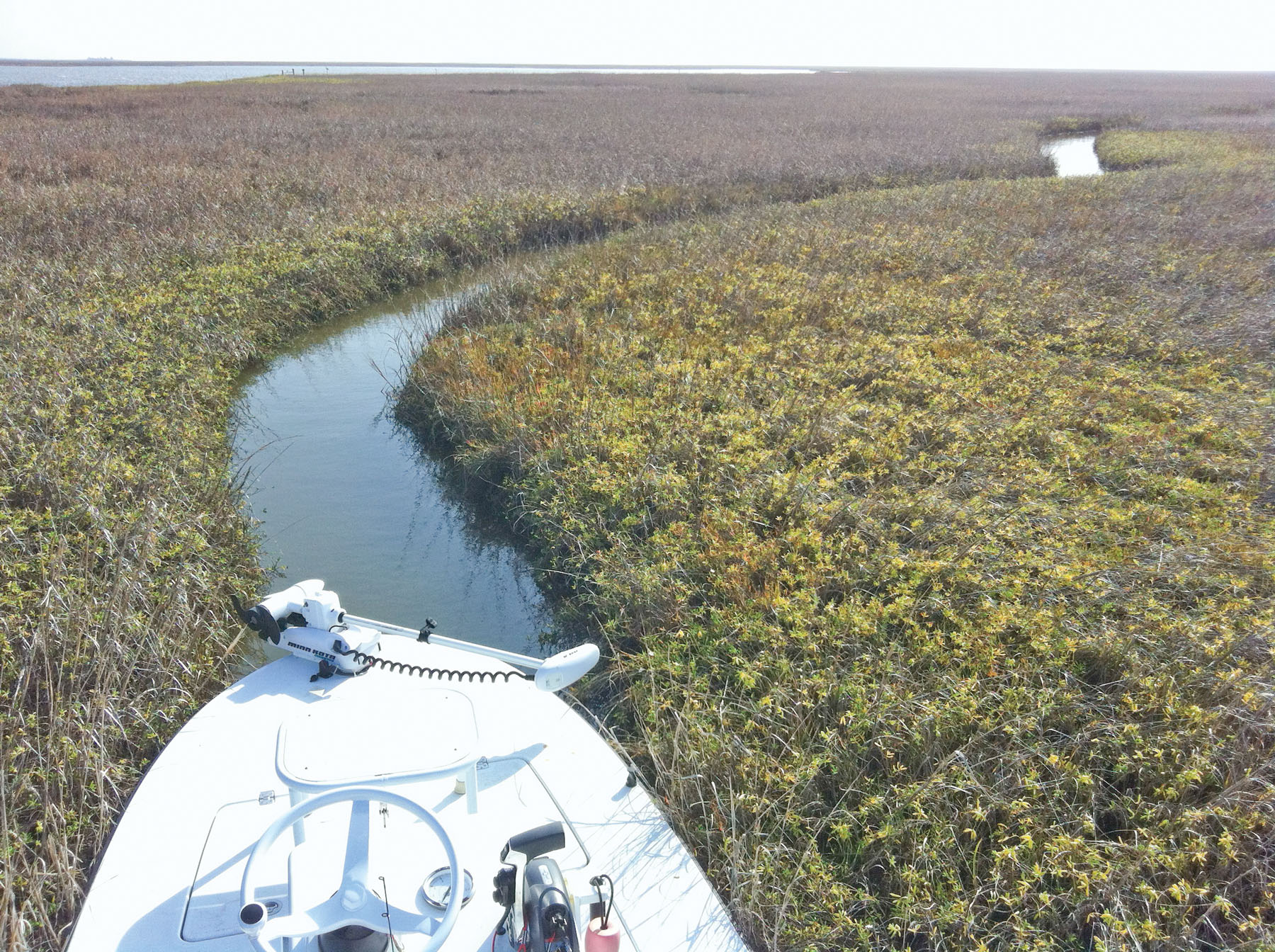 Why yes I do. As a matter of fact, I make a decent living at it.

While my fishing brethren further south along our coast have much clearer water and plenty of reds, Id have to put our upper coast redfish population up against any of the other areas. The majority of our water isnt nearly as pretty as Port OConnor, Aransas Pass, or the Laguna Madre. What it lacks in clarity it makes up for in richness. Much of what many people complain about as dirty water is actually a base of nutrients for the forage our reds grow fat on.

My history of sight-casting to reds started out in the gin clear waters around Port Mansfield twenty-four years ago. My wife and I took my old duck hunting jon boat down there for a week with no clue what we were doing. That old boat had an 85-horse Johnson equipped with a jet drive lower unit. I knew it was all shallow water in that area and figured this was the perfect set up to go exploring. About two miles into the trip I learned that turtle grass and jet drives dont go together.

The engine was overheated and the intake was stuffed full of grass. I pulled off to the side of the ICW and lifted the motor. My wife sat patiently as I dug into the intake with some needle nose pliers. Not being in the best of moods I summarily dismissed her comment, I think there are some tailing reds over there. Neither of us had ever seen tailing redfish in person and I seriously doubted there would be any along some spoil bank. I was wrong.

Sure enough there was a whole pile of waving tails just yards from where we happened to break down. At that time my wife didnt wade - period. So I pushed the boat as close as possible, still not quite close enough. At her urging I waded closer and tossed a broken back Rebel in front of the marauding crew. It no sooner hit the water than a red crushed it. The fish and I were equally hooked.

Thus began my lifetime obsession with hunting skinny water redfish. At first we ventured to Port Mansfield as often as possible, but eventually the eight hour drive got to be too much. It was much easier to get to Port OConnor or Rockport for a long weekend and so we spent a good many years exploring and enjoying these places. Being able to watch them go about their daily business on the acres of shallow grass flats taught me a lot about the habits of these reds.

Somewhere along the way the thought occurred to me that redfish are redfish no matter what zip-code they reside in. I decided to go looking for some skinny water reds in my own backyard. The Galveston/Freeport area is blessed with thousands of acres of marsh. I had spent a good deal of my youth prowling around these places in search of ducks so I had a pretty good base to work from.

Id like to say that it came easily, but it was quite a journey. These reds still ate shrimp, crabs and mullet. They still prowled around in water so shallow their eyeballs would show above the waterline. And quite often theyd tip up to wag their tails above the surface just like those spoil bank reds I first saw so many years ago. They were generally acting the same, but were a lot more difficult to pattern. Slowly but surely the puzzle pieces started falling into place and it became easier to predict when and where I could find them going about their business.

While they have their similarities to their southern kin, our upper coast marsh reds definitely do things different. The grass flats reds of the middle and lower coast are scattered all over the place. Their food sources use the expansive grass beds for cover sending the reds searching. Simply drifting across open flats produces enough shots to justify the effort.

Marsh redfish tend to hug the shorelines when feeding. The reason is pretty simple, thats where the food is. The ponds, lakes and bayous in a marsh generally have mud bottoms with very little structure. The shrimp, crabs and baitfish use the flooded cord grass edges as cover. The exception would be scattered oyster reefs and piles found in some areas. These are excellent areas to find reds tailing as they search the crevices for a meal.

Reds that are consistently crashing into the grass as they work down a shoreline are most likely feasting on shrimp. Take a poke at the grass with your paddle or push pole and see if you can spook some shrimp. If thats the case then youll have a good idea what flies or lures to throw. Often times when redfish are keying on shrimp theyll ignore anything that doesnt closely match the size or action of a fleeing shrimp.

During winter and early spring when shrimp are scarce youll often see reds bust the shoreline once and then seemingly disappear for a few minutes before doing it again several yards further down. These guys are usually feeding on mullet or other small baitfish. This activity used to drive me crazy as Id ease up to the location only to spook the red several feet off the shoreline. I finally just sat and watched them work. What I found is that theyll cruise along just off the shoreline herding the bait tight to the grass before striking. Once they eat theyll fall off the shore and just sit for a short time before resuming their patrol. Soft plastics and mullet imitation plugs are my go-to for these fish. If water clarity doesnt allow you to spot these cruising fish, start watching the baitfish. If they start bunching up and getting tight to the grass theres a good chance a red is pushing them. Toss the lure into the mix and draw a reaction strike.

If you find redfish gently nosing into the grass, poking around oysters or just aimlessly wandering an open mud flat; chances are good theyre looking for crabs. If thats the case then Ill toss a dark colored Buggs jig in their path and wiggle it to make some mud puffs like a crab digging in. These are fun fish because they go from nonchalant to viciously crushing the jig in a flash. Love that.

These are specific situations you may find from time to time when working the marsh. Most days they arent that picky and will eat most any well presented lure or fly, but if you find them being difficult remember these tips and see if you can unlock a good bite. But most of all, dont ever let those southern guys tell you theres no sight-casting on the upper coast.