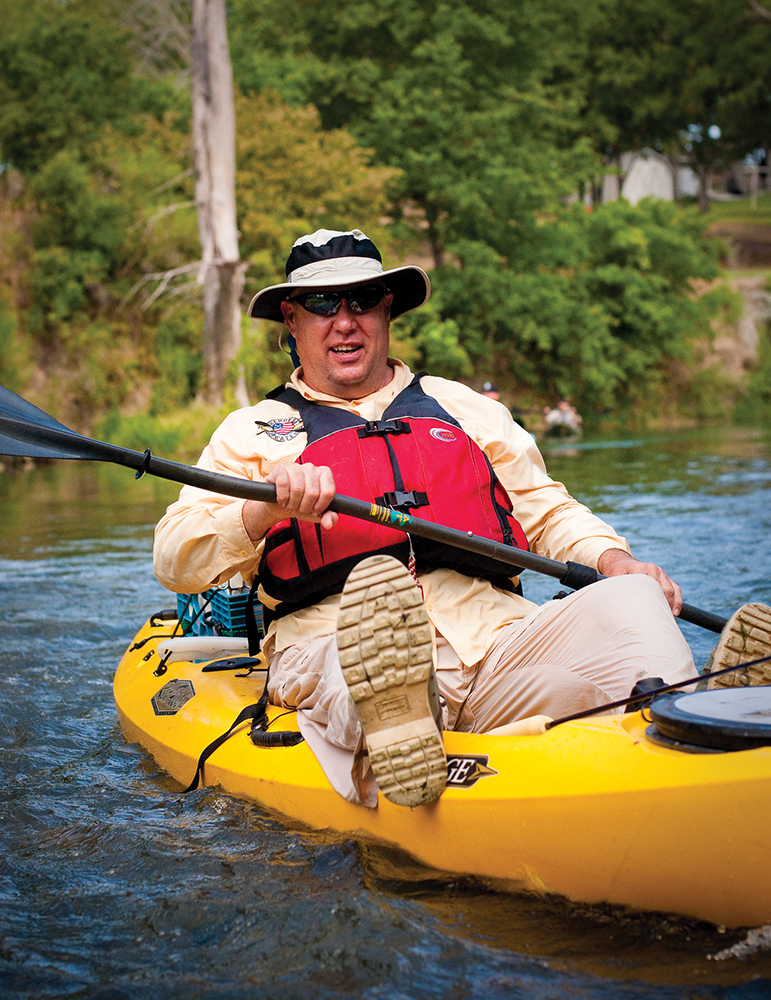 Jim Dolan, perhaps the biggest man to ever squeeze into a Mini X kayak. His heart was even bigger.

There are certain moments in life that burn into your memory. You will always remember where you were and what you were doing. My first such memory was when President Reagan was shot. I was in my old ’74 Chevy Nova headed to work at the Eagle grocery store. As I turned onto the Gulf Freeway service road the radio DJ broke into the middle of a song to deliver the news. Since that time I’ve had many more. They're never good news.

Sunday, October 6, 2019 will now join those memories. I had just arrived at the deer camp in South Texas to do a little bow hunting. As I walked up onto the porch my cell phone buzzed and the caller ID was my good friend, Captain Dean “Slowride” Thomas. Our conversations usually start with him saying something like, “Hey Dillweed, where ya at?” Not this time. I could tell immediately by his tone that it wasn’t good, “Hey man, Jim Dolan just passed away.” Weeks later it still hurts to even type that. Jim was firmly planted within my inner circle of close friends.

Jim came into my life while Dean and I were teaching the Kayak Fishing School in Aransas Pass. He was this big jovial fella always grinning and making jokes. After the first evening of classroom instruction we met at the water the following morning to launch onto the flats and do a little fishing. We had talked about kayak stability, safety, paddling instruction, etc. Well, Jim gets a few paddle strokes out into the channel and decides to check the stability of his craft. I happened to be paddling past him at that moment and watch as he quickly flipped over. I was momentarily concerned with having a student/customer upside down in some rather chilly water, but Jim popped up with a big goofy grin assuring me he was alright. Jim’s brother-in-law just grinned and paddled on by, shaking his head.

I gathered up the floating garage sale of gear as Jim swam back to shore pushing his kayak. It had all happened so fast that Dean hadn’t even shoved off yet. We got everything put back together and I headed off to catch up with the rest of the students. I no sooner got to the far side of the channel and I hear a large splash. Yep, Jim was upside-down yet again. I hollered back to Dean, “He’s yours this time.” I kept on paddling towards the rest of the class thinking to myself that just maybe this guy wasn’t cut out for kayaks.

By the end of the class we had tagged him with the nickname of Double Dip and it stuck. I was very much wrong about Jim. He was more than cut out for kayak fishing and we became good friends.

A retired Air Force pilot, Jim was flying for American Airlines when we met. He found that he enjoyed kayak fishing so much he wanted to share it with others. Being retired military, he and a couple other veterans got with Major Cody Roberson to see about taking some wounded vets on an outing. They began by working with the Center for the Intrepid out of Brooke Army Medical Center. This program deals with casualties who have sustained amputations, burns, or functional limb loss. At first it was just intended to give them a break from the rigors of rehab and daily life in a hospital.

I was fortunate enough to be involved in some of those early trips. Each of us would take on one soldier and paddle with them. Some fished as hard as anyone you've ever been around while others would just relax and paddle. On one trip I was paired with a young man who was fishing pretty hard. He was really into it and asking lots of questions. After a while he had caught a few reds and paddled over to a little mangrove island. He backed his kayak into the bushes, stretched his legs out and leaned way back in his seat. I paddled over to check on him. He said he was just fine and was relaxing for the first time since he could remember. I backed in next to him and we both just sat there in silence watching the birds go about their day.

Within a few months it was becoming clear that these little adventures were actually helping with both their mental and physical rehabilitation. It gave them something to look forward to and a reason to move forward with their rehab. My favorite story came from an event I wasn’t available for. A young soldier suffering from a traumatic brain injury had developed a stutter as a result of the injury. He had been in rehab for a couple of years when he came out to the event. He went out on the kayak and relaxed so fully that he fell asleep. After his nap he caught a few fish and came to shore a couple hours later. He got out of the kayak and started talking to the guys about the fish he had caught and how much fun he was having…all without a single stutter.  Amazing.

Jim started to get the idea that this was something he wanted to grow and get more organized.  He incorporated and set up a 501(C)3 to legitimize the organization. Jim and his wife, Sally, worked tirelessly to organize and support a growing interest in the program. Others began setting up chapters across the country for veterans beyond BAMC.

I have heard so many great stories about how this program has saved lives, marriages, and families. One in particular I wrote about a couple years ago was sitting in his apartment preparing to end his life with a shotgun when the phone rang. It was a guy with Heroes on the Water asking him to go fishing. He agreed and is now an area coordinator with the program and giving back to the organization that literally saved his life. Powerful stuff.

If you would like to get involved as a donor, volunteer or even organizing your own chapter within your area; you can find all of the information you need at www.heroesonthewater.org.

HOW has grown far beyond what any of us could have dreamed. There are now more than 60 chapters in 30 states as well as the U.K. and Australia. Their service has reached beyond just the wounded veterans to include any veteran, their family members, and most recently first responders. As Jim said, a cop with 20 years of accumulated stress needs HOW as badly as a veteran after a 9 month combat tour. That was Jim, always thinking about how to help somebody else.

But you know, I think Jim knew it was going to expand beyond any of our expectations. He was so positive and enthusiastic about the program that it was contagious. Being around Jim made you want to help out. It made you want to be a better person. He was the most selfless man I’ve ever known. I am better for having Jim as a friend and I will miss him dearly. As he often said, “It’s just fishing.”